Residents from Ann Emery Hall, then a private women’s dormitory, set sail on their lawn as part of a Homecoming tableau in November 1931. The display, which involved a boat, a stormy sea, and a lighthouse, won first prize among dorm entries that year.

The 1931 Homecoming was a rough one for the Badgers, who lost 6 to 0 to Ohio State, and the Emery women’s display turned out to be surprisingly apropos. Although meteorologists forecast perfect weather for game day, Madison instead received a deluge. Twelve hours of rain turned Camp Randall into a swamp, and the sun never made an appearance. Fans were frustrated by a heavy fog that blanketed the field in the third and fourth quarters, and few managed to see the lone score, when Ohio State blocked a Wisconsin punt and recovered it in the end zone.

It seemed all of campus was descending into chaos that weekend. Homecoming festivities turned into a riot when some five hundred student revelers stormed the Orpheum Theatre. The Capital Times covered the riot like a sporting event, giving it a tally in injuries and arrests. The police, they wrote, “scored two knock-downs and three POW.”

In 2009, Ann Emery still stands at 265 Langdon Street, though it’s now an apartment building. And Homecoming was considerably calmer, with no call for lifeboats. 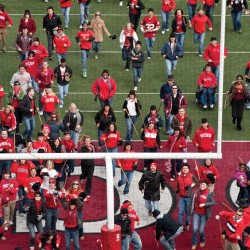