The Wisconsin Alumni Association has been honoring distinguished alumni for seventy-six years, but the accomplishments of this year’s group are truly amazing. Inventing the birth-control pill, one of the most far-reaching medical phenomena of the last century? Helping to launch the cable TV industry? Leading the National Science Foundation? Reshaping national insurance law? And becoming one of today’s most prominent jazz musicians?

As campus prepares to celebrate the Year of Innovation starting this August, these graduates personify the heart and soul of invention, creativity, and paving new ground. They will each return to Madison at different times to engage with campus and accept their awards. For more extensive biographies, see uwalumni.com/daa. Carl Djerassi is not only the co-inventor of the birth control pill — he’s also a playwright and author of at least twenty books and plays.

He fled Europe as a teen to escape Nazi repression, and when he was twenty, he began graduate studies in chemistry in Madison. Later, he joined Syntex in Mexico City, where his research with Luis Miramontes and George Rosenkranz led to the development of the first successful oral contraceptive in the early 1950s.

Djerassi started teaching at Stanford University in 1960. In 1977, he met (and later married) Stanford literature professor, biographer, and poet Diane Middlebrook. Djerassi began to write poetry, and his growing interest in fiction led him to publish his first novel, Cantor’s Dilemma, in 1991 at age sixty-seven. He called his new art form “science in fiction,” and his goal was to “smuggle science to the public under the cloak of fiction. … By using the cloak of fiction, I can illustrate and discuss ethical dilemmas that are frequently not raised,” he says.

When his daughter, Pamela, an artist, committed suicide in 1978, Djerassi and Middlebrook converted their ranch west of Stanford into the Djerassi Resident Artists Program in her memory. The program serves ninety artists each year in the areas of creative writing, visual arts, music, and choreography. More than two thousand artists from all over the world have already passed through the program.

At UW–Madison, he established two fellowships in creative writing in 1997 and the Carl Djerassi Fellowship in playwriting in 2007. In 2011, as a marquee guest for UW–Madison’s Year of the Arts, he read from two of his latest works and met with both arts and science students.

Among numerous awards, Djerassi has received twenty-seven honorary doctorates, the National Medal of Science, the Perkin Medal, the National Medal of Technology, the first Wolf Prize in Chemistry, and the Priestley Medal, which is the American Chemical Society’s highest honor. He is a member of the U.S. National Academy of Sciences, the American Academy of Arts and Sciences, the Royal Society (London), and numerous other academies. An Austrian postage stamp was issued to honor him in 2005. Cable TV visionary Kay Koplovitz is the founder of the USA Network and the first female network president in television history.

After stints in broadcast TV in the 1970s, she and her husband, Bill, moved to cable system franchising. She chose to switch to programming, since there were few original cable shows.

In 1975, she promoted the cable broadcast of the world Heavyweight Boxing Championship, pitting Muhammad Ali against Joe Frazier in the Philippines. The live event was broadcast to a stunned international audience by sending the signal 90,000 miles up to a satellite and back down to cable systems.

Two years later, Koplovitz and mentor Bob Rosencrans started the Madison Square Garden Sports Network, which became USA Network in 1980. As chair and CEO, Koplovitz led the network to a long-time number-one spot for cable viewership during primetime — a position it holds to this day. She launched the Sci-Fi Channel in 1992 and started USA Network International in 1994. The company was sold for $4.5 billion in 1998 to Barry Diller, former chief of Fox, Inc.

After then-President Bill Clinton appointed her as chair of the National Women’s Business Council, she decided to co-found Springboard Enterprises, a nonprofit that champions venture capital investments for women-led companies. Since January 2000, it has provided training for some five hundred companies that have raised more than $5.5 billion in equity financing.

She is chair of the board of Fifth & Pacific (formerly Liz Claiborne, Inc.) and also served on the boards of Oracle, Nabisco, Instinet, and Gen Re. She is a member of the board of visitors for the UW-Madison College of Letters & Science.

“She is one of a kind,” says Amy Millman, president of Springboard Enterprises. Life for Koplovitz is “a constant search for what’s happening, what’s new, how does she get involved, and how can she add value.”

For Koplovitz, it comes down to this: “I think if you’re not moving forward, you’re moving backward. There’s no standing still in this world.” The twelfth child of parents who barely finished the sixth grade in tiny Kenbridge, Virginia, Cora Marrett earned her PhD in sociology and rose to leadership at the National Science Foundation (NSF).

She serves as deputy director of the 1,700-employee agency, which awards about $7 billion annually, or 20 percent of all federally supported basic research in nonmedical fields of science, engineering, mathematics, computer science, and the social sciences. She is known for her humility, wisdom, wit and patience; for raising the profile of the social sciences within the agency; and for building bridges both within and beyond the NSF.

“The National Science Foundation is proud to participate in the fostering of discoveries and innovations of which the public dreams,” she says.

Along the way, Marrett was a faculty member at UW-Madison from 1974 to 1997, with appointments in sociology and Afro-American Studies. In 1997, she became senior vice chancellor for academic affairs and provost at the University of Massachusetts-Amherst. Four years later, the University of Wisconsin System tapped her to serve as senior vice president for academic affairs, and in 2007, the NSF hired her for a second time, and she rose to deputy director in 2011.

It all started in the Kenbridge library, where Marrett’s mother took her and her sister to learn to read. Her parents had a love of learning, she says, which surprises her now, because so many of their peers were illiterate.

In an award from the American Sociological Associa-tion in 2008, Marrett was cited for her work in “ensuring diversity.” She is credited with bringing scholars and teachers of color to the field of sociology and nurturing them so they thrive.

Marrett is a member of the board of visitors for the UW-Madison College of Letters & Science. She and her husband, Louis, established the Marrett Faculty Fellowship in Sociology, and provided a named fund to support the Chancellor’s Scholarship program. It’s not often than an attorney has a hand in establishing a new branch of law, but William Shernoff did just that when he won the landmark 1974 case Egan v. Mutual of Omaha. The case resulted in what is known as bad-faith insurance law. Now in force in more than thirty states, these acts allow consumers to sue insurance companies that take advantage of policyholders.

The senior partner in Shernoff Bidart Echeverria Bentley in California, Shernoff found his UW Law School experience transformative. “I wanted to help the underdog,” he says. “[UW–Madison] gave me an exposure to the academic world that I never had before.”

After graduating, he joined the army as a first lieutenant lawyer and defended soldiers in court martials. The public speaking required to educate his fellow soldiers changed him from a quiet loner into an articulate litigator. In 1975, he started his own firm, focusing on bad-faith insurance claims.

Shernoff says he’s “more into crusades than cases.” He helped the American Samoa government win a $100 million jury award for damages after a devastating hurricane. He secured a $5 billion settlement for families worldwide who had relatives die in concentration camps, yet had no proof of death to claim life-insurance proceeds.

He also wrote a textbook and three consumer books that help everyday people take steps to get their claims paid.

He also acted as a resource to filmmaker Michael Moore for the documentary Sicko, and his work with Holocaust survivors is the subject of the documentary On Moral Ground. Screen Gems recently bought the rights and has plans to make a dramatic film. Ben Sidran’s music career began when he played with Steve Miller x’67 and Boz Scaggs x’67 in a band called The Ardells during their UW undergraduate days. When Sidran wrote the lyrics for Steve Miller’s hit song “Space Cowboy,” he used the proceeds to pay for his PhD in American Studies at the University of Sussex in England.

Sidran went on to produce the music of pop and jazz artists, create jazz programs for radio and television, and record and perform his own music.

Sidran hosted National Public Radio’s landmark series Jazz Alive, which won a Peabody Award, and his thirty solo albums include the Grammy-nominated Concert for Garcia Lorca. As a producer, he worked with noted artists including Van Morrison, Diana Ross, and Mose Allison. His soundtrack for the film Hoop Dreams gained acclaim, and his score for the documentary Vietnam: Long Time Coming won both an Aspen Film Festival award and an Emmy. He wrote two books about jazz, Black Talk and Talking Jazz, and a memoir, A Life in the Music. He recently fulfilled a lifelong goal to record an album of Bob Dylan songs, Dylan Different.

Missing the Midwest lifestyle, he and his wife, Judy ’69, moved from the West Coast to Madison in 1972. Their son, Leo ’99, has become a national music phenom in his own right.

Sidran has advised the UW Center for Jewish Studies and this spring he visited with alumni and promoted his latest book, There was a Fire: Jews, Music and the American Dream, during a tour of five U.S. cities with WAA and the College of Letters & Science.

Jazz holds important insights for Sidran. “If you spend ten years blowing through a copper tube, that copper tube will not be changed. But you will have changed,” he says. “When you work on an instrument, you are really working on yourself.” 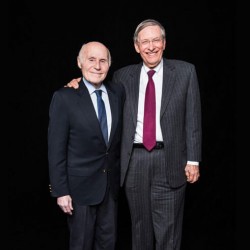