A successful company’s first “office” is often the result of big dreams and little money. Apple began in a garage. Whole Foods began partly in an apartment storage area. And Sixpoint Craft Ales, the fast-growing and widely heralded brewery founded by Shane Welch ’01, began in the basement of his former Vilas Avenue apartment.

There, Welch created many of the fifty-five varieties of beer that, at one point or another, have been brewed and distributed at his Brooklyn, New York-based brewery over the past five years. The names are often as inventive as the beer, including Otis (oatmeal stout), Sweet Action (American blonde ale), and a one-time specialty named Hop Obama.

“I’m the closest thing you’re going to get to someone who makes their own special beer by hand in their basement,” Welch says. “We haven’t amended the original recipes from when I was home-brewing beer in the basement in Madison … [we] just converted them to full-scale microbrew productions.”

Like many students, Welch knew when he got to Madison that he wanted to be in college, but not necessarily what he wanted to do — until he started brewing his own beer. His fondness for the craft was so strong that he dropped out of school to get into the business full time, but his hiatus was short lived. He re-enrolled in classes after just one semester, in addition to beginning an apprenticeship at the Angelic Brewery under brewmaster Dean Coffey.

“Education was always very important to me,” says Welch, “and I realized I would regret the decision to get that close to a degree and not finish.”

After graduation, Welch continued to experiment and home-brew along with working at the Monroe Street Wine and Hop Shop. After much persistence, he was able to land a full-time job at the Angelic Brewery under the mentorship of Coffey, who eventually urged Welch to take his skill to the next level. In 2004, Welch opened Sixpoint Craft Ales in Brooklyn, partly for the incomparable cultural scene and partly because he was confident that the densely populated area could support a new brewery.

His instincts were right. Business has more than doubled each year since he opened the business, and the company now employs nine people. Sixpoint expects to produce eight thousand barrels of beer in 2009 and more than ten thousand in 2010.

While the company has expanded faster than Welch could have imagined, his philosophy and inspiration for getting into the business have not changed.

“It’s like the first time I sat down with some friends and poured them [some of my] beer,” he says. “I’m seeing the positive impact of my actions. I’m getting to share a creative product, and at the same time I’m feeling the connection in what I do and how I can help make other people happy.” 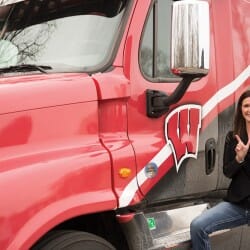 A Hundred Trucks to Call Her Own