State legislators have kept a close watch on the UW System’s finances since last year, when they accused officials of not clearly disclosing how much money they were keeping in reserve funds.

Although much of the $1 billion in reserves was already committed to specific expenses and tied to particular gifts, grants, and federal aid, state officials and others were angered that the UW Board of Regents raised tuition for students the last several years when it had cash on hand.

Last year, the legislature enacted a two-year tuition freeze, which continues in effect for undergraduate and graduate students for the coming academic year. Governor Scott Walker, who is up for re-election in November, has pledged to keep the freeze in place in his next budget.

The budget plan the regents approved this spring includes the freeze, but it also raises student fees and the cost of room and board. Students at the System’s thirteen four-year campuses, including Madison, have to pay an average of $39 more in fees, $115 more for housing, and $63 more for meal plans.

In the meantime, UW campuses are continuing to shrink balances in their reserve funds. Within a year, just 3.3 percent of the UW System’s $6 billion budget will be in cash reserves not designated for particular expenses. That’s low compared to institutions of similar size, but UW officials have viewed it as a necessary move to help repair relationships with the public and the legislature.

UW–Madison Chancellor Rebecca Blank has cautioned that it is reasonable for a large university to keep some amount of capital in reserve. “Such balances are a safeguard against revenue fluctuations caused by enrollment shifts or state budget cuts,” Blank wrote on her blog last year. “Keeping some funds in reserve is also a prudent practice to cover sudden cost increases for obligations like utilities or fringe benefits or as contingency for emergencies.” 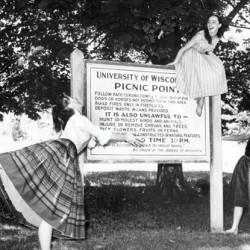