It’s Time for a Change

Orange barrels and detours greeted campus visitors hoping to linger in the State Street and Library Mall area over the summer. Work is wrapping up this fall on a first phase of mall reconstruction (shown in the lower portion of the rendering above), with improvements that include trees, landscaping, and new seating areas. One of the first big changes: removing the hulking concrete podium and stage, pictured at left, that split the mall in two. Photo: Jeff Miller; Rendering: City of Madison.

A beloved area of central campus gets a much-needed upgrade.

In Wisconsin, as the joke goes, there are two seasons: winter and road construction.

The campus end of State Street and adjoining Library Mall have been living up to that punch line this year, with orange barrels and noisy excavators detouring pedestrians in search of food carts and a place to people-watch.

But the changes to the historic area, which is bordered by Lake and Park Streets, aren’t being made without input from the people who frequent it.

“It’s really the beating heart of the campus and of the community. It’s where the president comes to speak, where memorials for September 11 have been held — all kinds of things happen in that space,” says Gary Brown ’84, director of campus planning and landscape architecture. “We want to get it right.”

UW and city officials reached out to gather opinions, holding public meetings and even installing chalkboards so passersby could express what they loved about the campus area and what they would like to see improved. People wanted it to be more flexible, lively, and colorful, and able to accommodate the variety of activities that the campus and community hold there throughout the seasons.

When the work is done this fall on the two blocks of State Street that make up the pedestrian mall, there will be new lighting, landscaping, public artwork, and seating areas. The project is also replacing the crosswalk at North Park Street that leads to the base of Bascom Hill. “[The area is] more of a community resource than just a campus resource. It’s used by everybody,” Brown says. “It’s really an amazing public space.” But completion of this project doesn’t signal the end of construction. What is officially considered Library Mall — the open area between the Wisconsin Historical Society and Memorial Library — will spend the next few years as a staging area for the second phase of renovations at Memorial Union and the construction of Alumni Park at the shore of Lake Mendota before undergoing its own facelift sometime in the future. 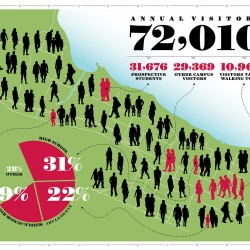