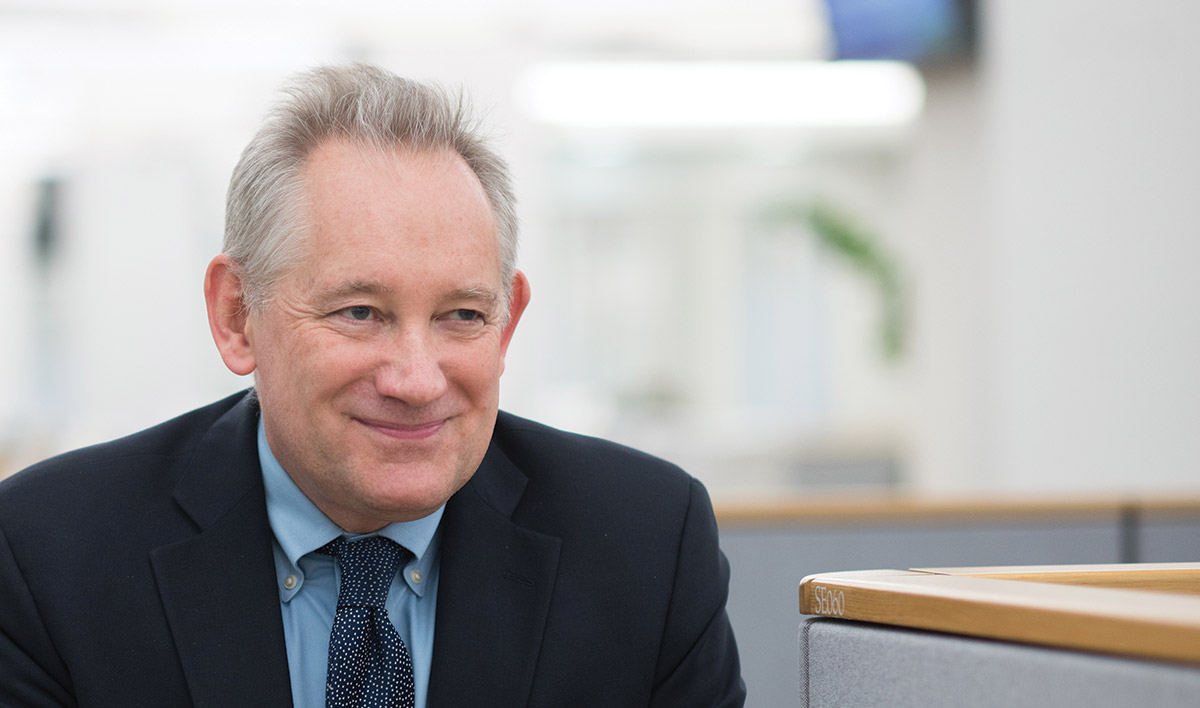 A Matter of Interest

Simon Potter has worked for the Federal Reserve Bank of New York since 1998. Michael Appleton

As the head of the Markets Group at the Federal Reserve Bank of New York, he’s in charge of carrying out interest rate changes on behalf of the U.S. central bank.

The Federal Open Market Committee (FOMC), which directs the country’s monetary policy, meets periodically to set short-term interest rate targets. When the committee decides to raise or lower rates, Potter’s team has historically bought and sold government bonds and conducted other trades designed to move what’s known as the federal funds rate, or the rate banks charge each other to borrow overnight.

The federal funds rate influences other short-term and long-term interest rates, such as those available when a consumer takes out a car loan. The decision to change rates has a ripple effect throughout the financial system, and the central bank uses its monetary authority to create conditions that will help the economy grow.

But influencing market rates is a challenging job these days. The Fed now has more than $4 trillion in assets, including Treasury notes and mortgage-backed securities, on its books — the result of historic measures the central bank took to stabilize the economy during the 2008 financial crisis. That’s forced policymakers to come up with new tools for triggering changes to interest rates.

Here, Potter talks about what it’s like to be in the hot seat when Fed leaders decide to raise rates and what he’s learned in nearly two decades working at the central bank.

How did you end up at the Fed? You’ve served in several positions since joining the Federal Reserve Bank of New York in 1998.

I started out in research. I was an academic for a few years on the West Coast, and then I got a job here as a researcher. One of the things that interested me straight away was the work that the Markets Group did, and that interest grew stronger through the years that I was in research.

The Markets Group was run at the time by Bill Dudley, who is now the president of the New York Fed. Working with those guys each day, trying to understand all of the events during the crisis and what happened, how quickly they responded to all of the desires to set up new approaches to making sure the financial system was working for households and firms — I was really impressed by that. When I looked at that and the skills I had, I thought they were pretty good matches.

In December 2015, the central bank’s Federal Open Market Committee decided to raise rates for the first time in a decade. What did that mean for your team?

People have been hoping the U.S. would be strong enough to raise rates for a long time. We’d been planning for years, starting in late 2009.

The big thing that we hadn’t been able to test was actually raising rates. We’d tested every other single thing. And we don’t know what’s going to happen until it’s decided, but we have to be ready for whatever the committee might decide. So there was a lot of checking that everything worked.

We were really the first central bank to try and lift rates using this kind of system [that employed new tools to raise rates in the postcrisis environment]. So we had a lot of staff available and a lot of potential resources if things didn’t run smoothly.

LOSING INTEREST: The Federal Reserve’s Federal Open Market Committee (FOMC) sets a target interest rate range as part of the Federal Reserve’s monetary policy efforts. When the country experiences economic growth, the target tends to rise, in an effort to control inflation. When the country is in recession, the FOMC lowers its target to encourage borrowing and spending and to increase economic activity. Since the economic crisis of 2008, the rate has been near 0 percent, though it rose a quarter of a percentage point in December 2015 and again in December 2016.

How did it go relative to your expectations?

I imagine that was a pretty stressful day.

There wasn’t much upside, and there was a lot of downside. There were many people who believed it was not possible to do this. I’d given speeches, and other people have given speeches, about how confident we were — and we were very confident — but one of the things that surprised us and that surprised some of the market participants was how well it worked from the first day.

The Fed voted to raise rates again this past December. Was that experience any different for you? Were you able to apply what you learned a year earlier?

We had about a year to observe the new regime of interest rate control away from the zero bound, and we were confident that overnight rates would all go up with a change in the target range. On Thursday, December 15, they did by 25 basis points. Overall, rate control in the new regime is robust.

Why is this interest-rate decision so important for the economy, and how does that end up affecting regular people?

There’s a link between people’s views about these rates and where they’ll be in the future. If they expect, as they did in the fall of 2015, that it’s very likely that the Fed will raise interest rates, a rate for three months will show the impact.

Perhaps the most important thing for people in the U.S. is fixed-rate mortgages. But there, the link is less direct in terms of the overnight rate that the Fed sets. However, there is still a link. If people think over the next few years that the interest rate the Fed is setting on overnight borrowing will stay relatively low, then that will make longer-term interest rates low, which will then make mortgage rates lower.

More broadly, when the Fed changes interest rates, that affects the prices of lots of other things that contribute to the wealth of households. For example, you could see the stock market go up, so that would have some influence.

You were at the New York Fed in the lead-up to the crisis and during it. What did you take away from watching that unfold?

I think I had really good training at Wisconsin, where I got my PhD, to think through these things. There, you have ways of understanding how the world works. It’s a mistake to think the world always works in a really efficient way. I remember my thesis adviser, William Brock, was very good in explaining that the world could look like this, or if people believe something else, it could look exactly like that. This notion of beliefs or confidence was really critical in the financial crisis, particularly if you go back eight years ago to the height of the crisis. … And because I’d worked on that area a lot, it was useful to have that background.

What I came to appreciate is that the practical end is critical, and some of what you see in economics training I think could benefit a little more from understanding this practical part of how the financial system works, when you take away some of the financial assumptions that make it easier to model. With the PhD, I was lucky that my thesis adviser was very careful in what assumptions you make and what happens when you relax assumptions in the models.

What’s surprised you about this job now that you’ve been in it for a few years?

The importance of strong teams and how you nurture that — how critical that is. In a role like mine, you’ve got 500 professional people working with you. How do you make sure they’re engaged each day in a way that leads the team to produce better results? How do you plan for the future?

One of the changes I’ve tried to put in place is more thinking three to five years ahead. I think we’ve gotten much better at that. One of the things that happened in the crisis is [that] these shocks hit us, and we responded to those shocks quickly. But it’s also good to think about what shocks might hit in the future and be ready for those shocks in a more structured way.

The Federal Reserve System is just a little over a century old — it was created by the Federal Reserve Act of 1913. There are actually 12 Federal Reserve Banks located in cities around the country, and the purpose of the system is to “furnish an elastic currency, to afford means of rediscounting commercial paper, [and] to establish a more effective supervision of banking in the United States.” In other words, it tries to provide economic stability. Everyone interacts with the Fed at least a little. We all carry Federal Reserve Notes — also known as dollar bills.