One of the Fortunate Few I stood on the Milwaukee Road platform with my father, holding a single suitcase and waiting for the train that would take me to Madison and the university. It was September 1945. I was seventeen, World War II had ended a few months before, and I had never ridden on a passenger train.

We stood on the same smelly downtown Milwaukee platform where, two years earlier, my father and I watched my second oldest brother leave for a Texas air force base. That was not a happy day. Although my father felt considerably better as he wished me well, he may have had misgivings, since we had been working closely together in his farm-feed business for three years. However, my parents wanted me to attend the university, and I promised that I would work hard and make them proud.

I don’t remember that train ride, but I do remember my first college acquaintance. As I got off the train, I was tightly holding the letter that told me where I’d be living: Kronshage Hall, Swenson House, Room 213. A tall, husky, handsome fellow disembarked with me and yelled for a cab to take him to Swenson House. His name was Jim Robertson, and we lived together in Swenson for the next four years.

The house fellow met us at the door and informed us that navy personnel still occupied the house and we would temporarily live in the basement. We went down the steps to a space filled with metal double-deck bunk beds, with precious little room between them. Seventy-two men shared the basement facility for a week, but everyone was in good humor. Three-fourths of the men were recently discharged veterans, and most still wore uniforms or parts of uniforms. Most of them had seen a lot worse.

I came to recognize that living together in this noisy, gray, confined space was a special bonding time, and my initiation to college life. We received materials from student affairs detailing the week’s activities, and soon we were busy — certainly too busy to worry about housing.

For me, every moment was new and immensely stimulating. We took proficiency tests in English and math. We were given physical examinations, which brought forth considerable complaint. We were invited to President [E.B.] Fred’s home for tea, and everyone who attended wore a coat and tie. Although we weren’t at Oxford or Harvard, there was a sense of dignity and respect, and to a seventeen-year-old freshman, it was pure grandeur.

I had graduated from Milwaukee’s Washington High School that June, when the war in Europe had ended, but the war in the Pacific was still being hotly fought. Most of my high school classmates were already eighteen and had enlisted or been drafted. I was as yet ineligible for the draft, and I had no desire to enlist. College brought an entirely new society.

At a freshman orientation session, the dean had a simple but powerful message: “You are the fortunate few, a select company. Most young men and women will not have the opportunity to pursue higher education. The friends you grew up with will most likely no longer be your friends. A university education will separate you from those who did not attend college.”

It was a message he had no doubt delivered throughout the Depression and war years. He could not have envisioned the flood of veterans soon to come to the university. To me, the message had immense impact, and I felt very lucky indeed.

Two days passed in Swenson’s basement before I met Bill Rubnitz, my roommate for the next two years. He was not overwhelmed by our living situation or by the size of the university, and he took the lead through the formal class registration and the informal purchase of football tickets. A native of Beloit, Wisconsin, Bill had worked in his father’s newspaper- distribution business. We were both Jewish, and the university’s housing policy adhered to an ethnic matching system wherever possible.

At the end of the week, the navy personnel moved into the adjoining hall, and we moved upstairs. We walked over to Van Hise Commons to eat with the women living in nearby Tripp and Adams Halls. That first semester, women outnumbered men almost two to one among undergraduates; for the remainder of my college years, the ratio shifted to men outnumbering women three to one.

Freshman orientation week came to an end with a Friday evening spent at the Union Rathskeller, with easy conversation and 3.2 beer —¬†although I never developed a taste for beer and drank Coca-Cola. I had already made enduring friendships. The rude shock of going to class thoroughly unprepared for academic demands would come on Monday. Let it come; I was one of the “fortunate few.” The feeling has never worn off. 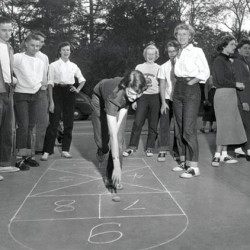