The rise, fall, and rise of a beloved UW tradition 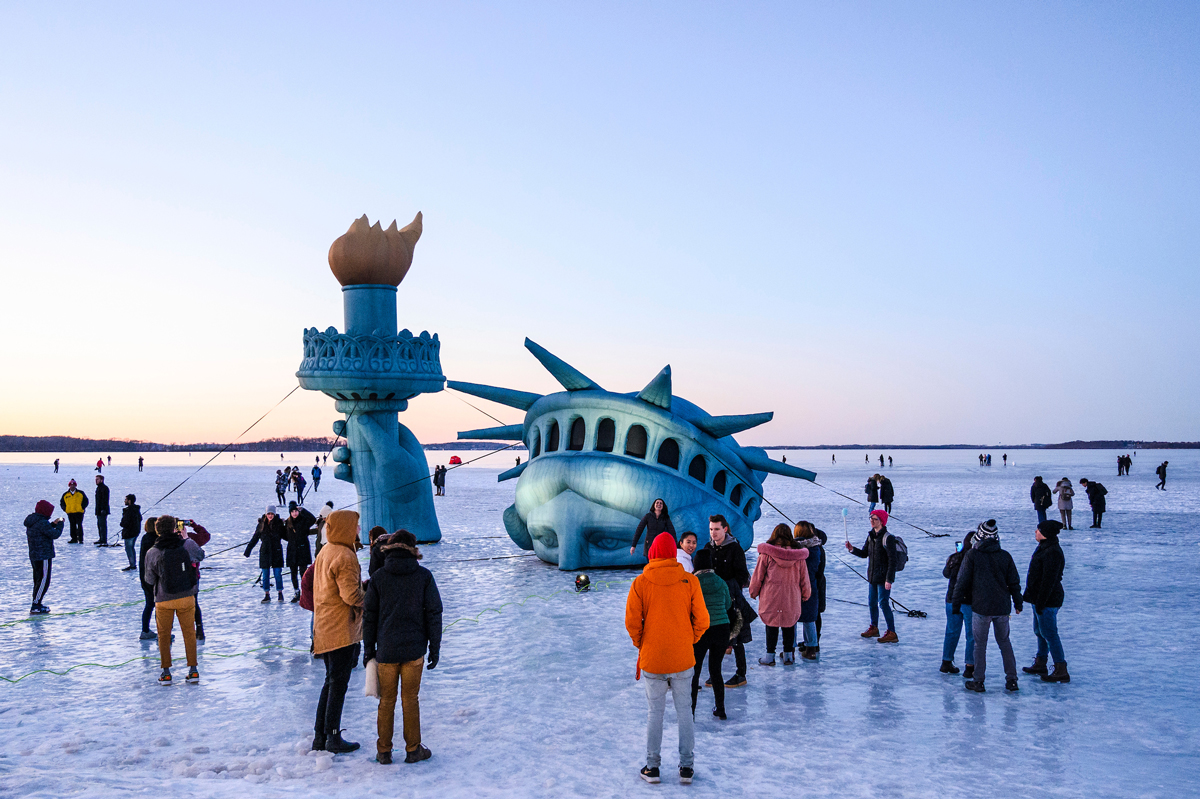 Now inflatable, the statue has overcome acts of both man and nature since 1979. Brian Huynh

Once upon a time, the Lady of the Lake wasn’t universally beloved.

In February 1979, legendary pranksters Leon Varjian x’83 and James Mallon ’79 and the Pail & Shovel Party made good on a campaign promise: bringing the Statue of Liberty to Madison. Built to look semi-submerged, Lady Liberty on Lake Mendota was a replica, with papier-mâché, chicken wire, and plywood substituted for shiny copper.

While the prank delighted supporters of student government’s parody party, the frivolous cost of construction — some $4,000 — offended others. Among them was a Milwaukee state senator who introduced legislation to curb student expenditures. (It failed.) A political science class demanded a refund for their share of the cost. “Varjian dutifully wrote out sixty ten-cent checks,” the UW’s alumni magazine reported.

Ten days later, vandals torched the statue. Varjian and Mallon held a funeral service on the ice, complete with “Taps” and a 21-gun salute. “She Died for Lack of Tolerance,” her tombstone declared.

Mallon prophesied that Lady Liberty, like the mythical phoenix, would rise from the ashes. And so she has, overcoming acts of both man and nature to become a uniquely UW–Madison tradition.

In 1980, the Pail & Shovel Party re-created the statue with fiberglass-coated Styrofoam. The statue was moved to storage at a professor’s barn in Barneveld, Wisconsin, where the pieces remained for years and fell into disrepair, expedited by a 1984 tornado.

Rising restoration costs forestalled several attempts to liberate the statue over the next decade. The Wisconsin Hoofers finally revived it for the 1996 Winter Carnival, after which Dane County acquired it for display at local events.

Hoofers reacquired the statue from the county for just $1 and restored it for the 2009 Winter Carnival. It was the Styrofoam version’s last stand, as it was vandalized beyond repair the following year during assembly.

Forty years after her first appearance on Lake Mendota, the Statue of Liberty rose yet again — this time in inflatable form. On February 1, 2019, thousands of spectators flocked to the lakefront to take pictures of Lady Liberty 3.0. The Wisconsin Union worked in secret for months to pull off the stunt, collaborating with Landmark Creations in Minneapolis.

“What started as a prank back in the ’70s [is now] an excellent example of what the Wisconsin Union and Hoofers are all about, which is finding outlets for students to do really extraordinary things, particularly for their fellow students,” says Mills Botham ’19, who helped to bring Lady Liberty back to life as a student and is now head of instruction for the Hoofer Sailing Club.

The new Lady of the Lake is cost-effective, weather-resistant, and quick to assemble, and the Winter Carnival plans to display it for years to come. At long last, the tradition is here to stay. 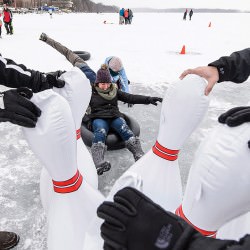