The regatta has no rules and offers no prizes, and the chances of tipping into the water seem greater than winning one of the loosely organized heats.

Can a pumpkin be aerodynamic — or even seaworthy?

UW-Madison horticulture professor Jim Nienhuis grows them that way, producing the “smooth sailing squash” needed for the Giant Pumpkin Regatta held in September for the past five years on Lake Mendota near Memorial Union.

Spectators travel from as far as Michigan and Illinois to witness the spectacle. The pre-race pageantry starts when Nienhuis arrives at the lakeshore with a large machete he uses to carve the 400- to 550-pound pumpkins to ready them for competition.

“Pumpkin pilots” have their choice of sitting in the squash like a recliner — the better to take advantage of the cup holder carved into it — or kneeling as you would inside a canoe or kayak.

Once lodged securely in tractor-tire inner tubes, the three-foot-wide pumpkins reach their full potential. Still, the regatta has no rules and offers no prizes, and the chances of tipping into the water seem greater than winning one of the loosely organized heats.

Five years ago, Goldman and Nienhuis were making one of their regular appearances as “the vegetable guys” on Wisconsin Public Radio when a caller from the northern part of the state reported seeing pumpkins floating down a river. The professors were intrigued enough to see what would happen if they put some pumpkins in the lake, but discovered that they flipped over too easily. With some nautical advice from members of the Hoofer Sailing Club and a donation from BF Goodrich Tires, they found that using large tires solved the problem.

“Steering is, of course, an issue,” Nienhuis says. “With a little practice, [pilots] can move along at pretty good pumpkin speed.” 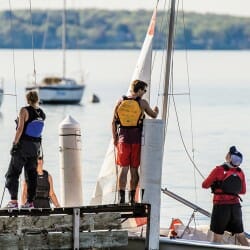 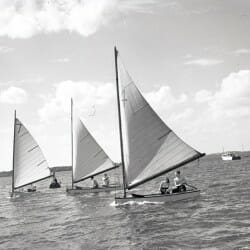