A visit with the Abe Lincoln statue is a high point of any UW commencement weekend, when graduates — not deterred by caps and gowns — clamber up into his lap for photos.

For one hundred years, it has watched over campus from atop Bascom Hill.

And during that time, UW-Madison’s Abe Lincoln statue has worn a lot of hats — literally and not voluntarily — to mark various holidays and protests. The looks have ranged from red earmuffs to a Santa cap to a St. Patrick’s Day topper.

For some student athletes, a quick tap on Abe’s foot powers them up and down the hill during exhausting workouts. As one former crew member says, the gesture is “a little nudge from the big guy to keep on keepin’ on.”

In other situations, memory conjures a bawdy legend about what it means if Abe remains seated when someone walks in front of him. Consider the case of one then-undergraduate who ran into his soon-to-be stepmother at the top of Bascom Hill. Abe did not stand up for either of them, an implication they both understood — awkwardly — but still laugh about to this day.

But for most, a visit with Abe is a high point of graduation weekend, when camera-toting families tread up the hill, and graduates clad in caps and gowns clamber up into his lap. While they’re there, they whisper their hopes and dreams into his bronze ear, sometimes capping the one-sided conversation with a peck on his well-worn cheek for luck.

Some don’t wait for graduation day, opting to climb up after a last exam — and fueling the debate over the right time to bend Abe’s ear. Another legend says you won’t graduate if you visit Abe too early.

So why is Abe such a magnet for graduates? Perhaps it’s because the entire time they’ve been on campus, he’s watched as they found their way around, transitioned from undecided to majors and back again, or took solace in a game of Frisbee on the grass after a bad exam. Abe is a constant in the UW experience, and when life as you know it is about to change, that’s pretty comforting. 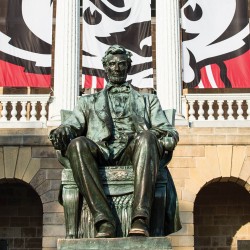 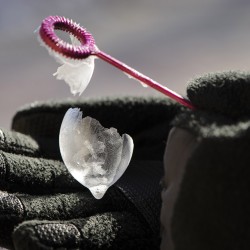