Filmmaker Robert Stone ’80 remembers crushing cans in his suburban New Jersey hometown during the very first Earth Day forty years ago. “Twenty million Americans took to the streets demanding action that day,” he says. “If that happened again today, you could get anything you want done.” In his new documentary Earth Days, airing April 19 at 9 p.m. EST on PBS, Stone revisits the eco-activist movement that took root in the sixties and led to the formation of the Environmental Protection Agency.

Stone’s film features interviews with veteran advocates, including former Secretary of the Interior Stewart Udall and Population Bomb author Paul Ehrlich. On camera, astronaut Rusty Schweikart remembers his green-planet epiphany as he gazed at the Earth while floating above the surface of the moon, and Stewart Brand describes the rooftop LSD trip that inspired him to create the Whole Earth Catalog.

Earth Days serves as a sequel of sorts to Stone’s The 1930s: The Civilian Conservation Corps, which aired last fall on PBS and is now available on a five-DVD package titled The 1930s. Illustrated with stellar black-and-white footage from the National Archives, Corps is narrated primarily by former CCC workers, now in their nineties.

Introduced by President Franklin Roosevelt in 1933, the public-works program represented a new approach to environmental stewardship, Stone says. “Beyond preserving wilderness areas, Roosevelt created the Corps to address how we work the farms and manage forests. That, in turn, begat what I think Earth Day is really about: a broader understanding of our relationship to the ecosystem.”

Stone traces his passion for activist filmmaking to a life-changing UW history course taught by the late Harvey Goldberg ’43, PhD’51. “I fell under the spell of Harvey Goldberg, who was this brilliant, extremely left-wing history professor. His classes were outrageous, incendiary, and just fantastic.”

In place of term papers, Stone and classmate Paul Holahan produced a Super 8-format short film, Wake Up!, as their final project for Goldberg’s course. Stone recalls, “We snuck cameras into an assembly line, and we broke into Standard Oil headquarters in Chicago and tried to see the executives — it was like Michael Moore’s Roger and Me, but way before that film came out.”

Already immersed in Madison’s film-society culture, Stone routinely watched three movies a day. Creating his first short documentary transformed him from audience member to filmmaker. “We’d stay up all night editing, had a great time, showed it to Goldberg’s class of five hundred people, and got a standing ovation,” he recalls. “I knew right away, making that movie, that I never wanted to do anything else.”

After graduating with a degree in history, Stone used his senior thesis about atomic-bomb testing in the South Pacific as the foundation for his first feature-length documentary, Radio Bikini. Nominated for a 1988 Academy Award, it inaugurated a body of work, including Guerrilla: The Taking of Patty Hearst, and Oswald’s Ghost, focused on twentieth-century American culture. Stone says, “There’s a common thread running through all my films. I take subjects that people might have heard of, but turn them around a little bit. My fascination with history, my love of cinema, and my kind of oddball view of America — it all comes together.” 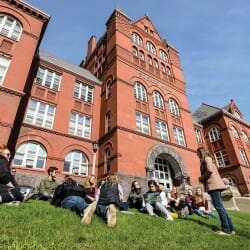