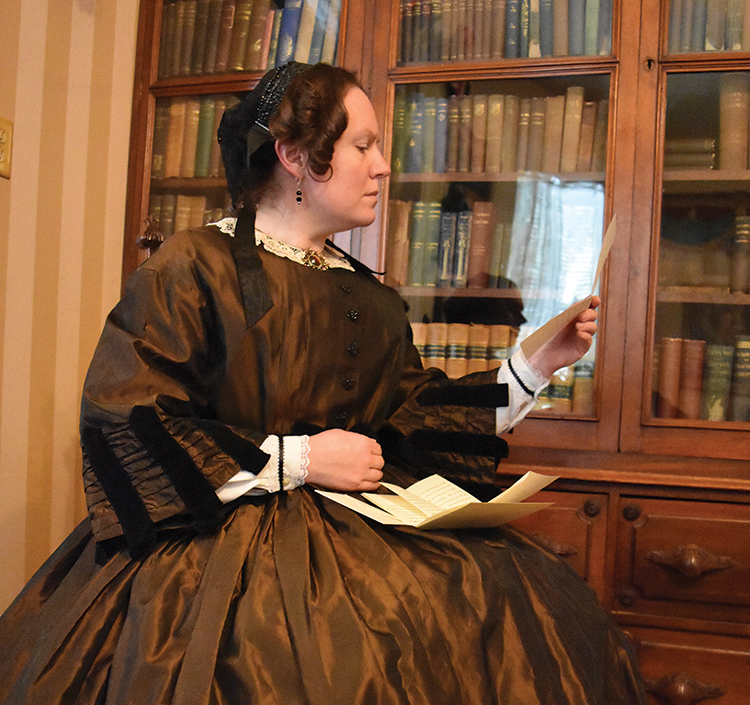 Laura Keyes MA’07 has wonderful personalities — six, to be precise. Since 2008, Keyes has given more than 750 presentations as acclaimed 19th-century women, mostly as Mary Todd Lincoln, Laura Ingalls Wilder, and suffragist Elizabeth Cady Stanton. Her other characters include Charlotte Brontë, the fictional Irene Adler (the only woman to outwit Sherlock Holmes), and Lincoln’s daughter-in-law Mary Harlan Lincoln.

In real life, Keyes heads the public library in Dunlap, Illinois, a role that meshes well with her passion for accurately re-creating the past. “I’m an extraordinarily well-organized person,” says Keyes, who earned her master’s degree in library science at the UW. “I am careful in what I say, and I’m careful in my research as well.”

That research extends to the period clothing she wears as she works with seamstresses to ensure that apparel — from Lincoln’s silk ballgowns to Wilder’s cotton day dresses — is as authentic as possible. The costumes help her get into the mind-set of her characters. Some of her dresses weigh 10 pounds, and she wears three layers of underclothing. “You move and think differently,” according to Keyes. “You gesture differently — not only because of the corset, but because of the [restrictive] cut of the dress.”

Her avocation began when she was cast as President Lincoln’s widow in a local play. Newly graduated from UW–Madison, Keyes dove into studying the tragic First Lady. A newspaper noticed her scholarship. Soon other libraries asked her to appear.

“Mary Lincoln was a complicated person who lived a very hard life,” says Keyes. Besides her husband’s assassination, Mary suffered the deaths of three sons. Her surviving son had her committed to a mental institution. Keyes offers five different Lincoln presentations, each at a crucial moment in her life, and shares stories of her compassion as well as of her selfish, petty behavior. Keyes acknowledges Lincoln had symptoms that match bipolar disorder. “I share different perspectives of her,” she says.

Wilder has proven to be a challenging persona as well. In recent years, her books have been attacked for racial insensitivity. “They are still good teaching tools,” says Keyes. “But as one tool in a series of other books.”

Keyes’s favorite character? Stanton, who fought for women’s right to vote. “Her words are timeless. I use a lot of passages from her writings, letters, and autobiography. Some of her arguments are very, very relevant today,” says Keyes.

People often ask her characters to comment on news events or current First Ladies. Perhaps mercifully, she gets to dodge those questions. Says Keyes: “Mary Lincoln says she doesn’t know who those people are, but people still ask.”