This past May, host Phil Keoghan (right) informed Rachel and Dave Brown that they were the winners of CBS’s The Amazing Race competition. Photo: Monty Brinton/CBS © 2012 CBS Broadcasting, Inc.

UW–Madison prepares its students and faculty for many things in life. But stacking watermelons to create a ten-by-ten-foot pyramid in the sweltering heat of Paraguay isn’t one of them. Luckily, the failure of Rachel Holm Brown ’03 and her husband, Major Dave Brown, Jr., to complete such a challenge on the CBS reality show The Amazing Race wasn’t enough to knock them out of the competition. But it did sharpen their focus.

“Attention to detail is crucial in this race,” says Dave. “We learned our lesson after the watermelons …”

“And I think that’s the biggest reason we won,” Rachel adds.

Team Army — as they were known to fans thanks to Dave’s sixteen years in the army and his position as an assistant professor of military science at UW–Madison — not only won the twentieth season of the popular series, but they also rewrote the show’s record books. Along with scoring the $1 million grand prize, several vacation trips, and his-and-hers cars, the Browns became the most successful team in race history by winning a record eight challenges.

And what did the victorious couple do for an encore after their globetrotting adventures to five continents, nine countries, and twenty-two cities? Sleep! “We returned roughly two days before Christmas [2011] and had every intention of spending quality time with family,” recalls Dave. But the allure of some much-needed shut-eye was too great.

They needed all the rest they could get, because once the show’s finale aired in May, the Browns found themselves on another whirlwind tour — this time filled with countless media requests. And while the paparazzi tend to stay on the coasts, the celebrity spotlight has been shining on Rachel and Dave in Madison. “A guy at the post office was excited to get my autograph,” says Rachel. “I thought he was just kidding, but he told me he watched the show, and our Midwest work ethic was the best!”

Although they could be asked to participate in a future all-star edition of The Amazing Race, the Browns don’t plan to become reality-TV regulars. “I have no intentions of going Hollywood,” says Dave, quickly adding with a smile, “Rachel would be a prime candidate for Dancing with the Stars, though, after her moves during the race’s Bollywood challenge.”

No spending sprees are on the horizon either, as the couple admits to being frugal. But Dave did give Rachel a special birthday gift: a stand-up paddleboard like the one they used in Honolulu to reach the race’s finish line. “We just got done trolling around the Yahara River on it,” says Rachel.

The Browns are now focusing on their careers — Dave is pursuing a master’s degree, and Rachel is a project manager at Epic Systems in Verona, Wisconsin — and doing community outreach. “Rachel and I had the pleasure of speaking to seventh- and eighth-grade students at [Madison’s] Sherman Middle School,” says Dave.

In the end, the couple’s down-to-earth Wisconsin sensibilities may be what made their race so amazing. 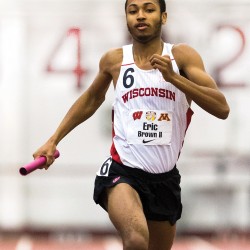