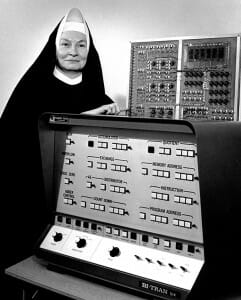 As a nun, Keller defied traditional expectations in becoming the first woman to earn a PhD in computer science. Courtesy of Clarke University

In 1965, Sister Mary Kenneth Keller PhD’65 became the nation’s first woman to earn a PhD in computer science. She came close to being the first person ever, but the first man to earn the degree accepted his diploma at Washington University in Saint Louis earlier the very same day.

Keller entered the Sisters of Charity of the Blessed Virgin Mary in 1932 and went on to earn her bachelor’s in math and her master’s in math and physics from DePaul University. She also did graduate studies in computer sciences at Purdue, the University of Michigan, and Dartmouth College, which made an exception to its no-women rule to allow her to work in its computer lab.

After graduation, Keller started a computer science program at Clarke College in Iowa, a women’s institution founded by her order, and ran it for 20 years. She was a strong advocate for women in computer science and for working women, encouraging adult students to bring their babies to class.

Keller proved prophetic about the impact of computers, predicting that this new tool would make the information explosion accessible to all, that it would become instrumental in teaching students, and that it would facilitate AI: “For the first time, we can now mechanically simulate the cognitive process,” she said. “We can make studies in artificial intelligence.”