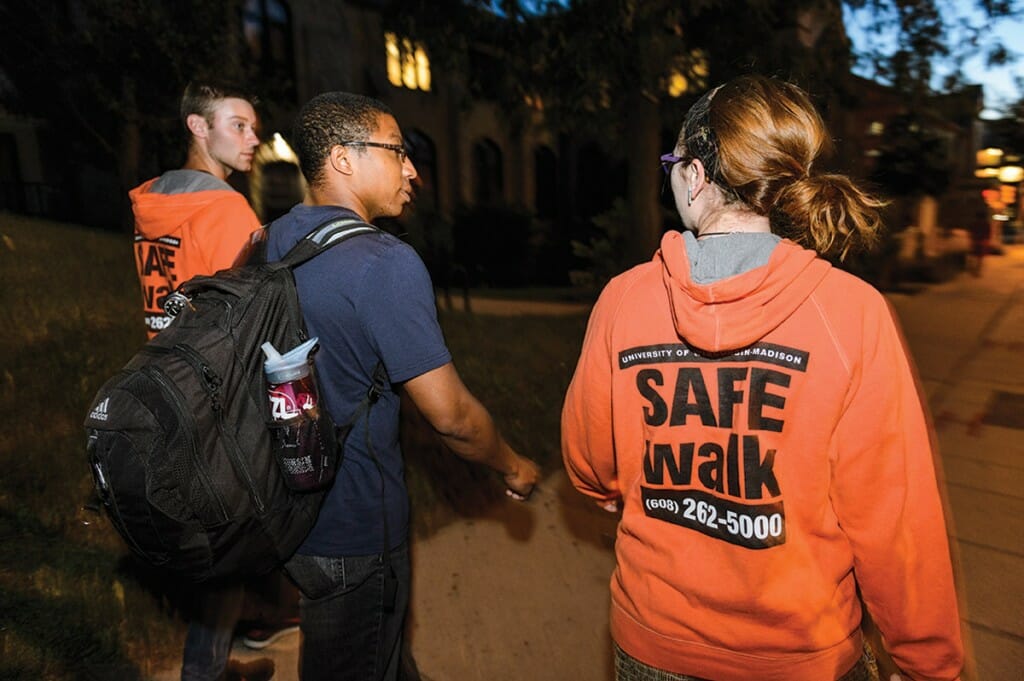 The campus community was shaken following an assault and attempted abduction near Observatory Drive in October. A UW student who was walking home from College Library around 1 a.m. was placed in a headlock by an unknown assailant with an edged weapon, forcefully moved to an area parking lot, and struck multiple times.

The victim was able to escape and get help, and the suspect has since been arrested. The incident — a rare, but extreme, case — gained significant attention and correlated with an increased use of campus safety resources, says Marc Lovicott, director of communications for the UW Police Department (UWPD).

In the fall, UWPD launched a free app, WiscGuardian, that transforms smartphones into personal safety devices. Created with input from the Associated Students of Madison, the app allows students, faculty, and staff to ask trusted “guardians” to virtually monitor their walks to their destinations. It also has other safety features, such as the ability to text tips to the police and dial 911 at the touch of a button.

“Is this app the only answer to keeping people safe? Absolutely not,” Lovicott says. “But we think this is just another tool that individuals can use to better protect themselves and have that peace of mind.”

Lovicott adds that the app has garnered positive feedback so far and has helped UWPD to obtain tips it might not have received otherwise. As of early January, it had nearly 700 registered users.

A similar campus safety resource, SAFEwalk — a “walking companion service” started in 1993 that dispatches teams of UWPD-trained students in response to requests — saw its number of walks nearly triple in October compared with earlier in the semester. Although SAFEwalk was able to accommodate the increased demand, more staff members have been hired to help relieve pressure on student workers, says Carolyn Wolff, a communications specialist with UW Transportation Services.

“We want to keep extra staff available at night as long as there is a demand and need for it,” she says.