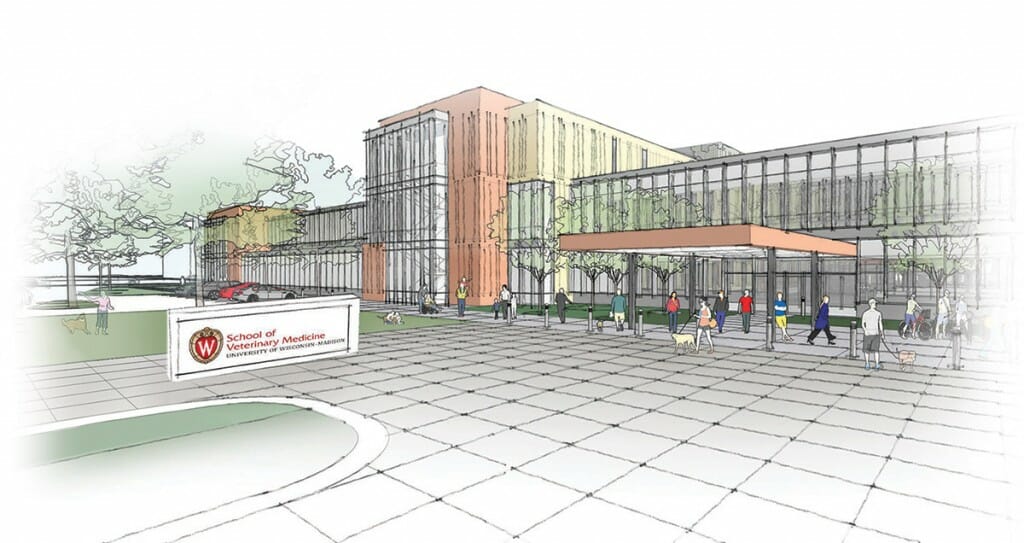 Expansion of the School of Veterinary Medicine, the only veterinary school in Wisconsin, will allow it to serve more farmers and pet owners across the state. The current hospital was built to accommodate 12,000 patients a year; in 2016, it served 26,500. Flad Architects

The only certainty is uncertainty with a divided government, and so it goes for UW–Madison’s 2019–21 biennial budget request.

Last August, the UW Board of Regents approved an operating budget request of $107.5 million in new state funding for the UW System to support high-demand academic programs, with much of the funding tied to performance metrics.

The regents also approved a $1.9 billion capital budget recommendation (spanning the next two budgets) for the maintenance, renovation, or replacement of campus buildings, including a $90 million addition to the current UW–Madison School of Veterinary Medicine, which opened in 1983.

“With continued investment from the state, UW–Madison will remain a world-class university in education, health, and research that changes lives and powers Wisconsin’s economy,” Chancellor Rebecca Blank said at the time.

Newly sworn-in Wisconsin Governor Tony Evers ’73, MS’76, PhD’86, formerly the state schools superintendent, is expected to release his budget proposal in February or March. (It was not available at press time.) The negotiation process between Evers, a Democrat, and the Republican-led legislature could continue through the summer. The budget bill must be passed by the state assembly and senate before returning to the governor to be signed into law.

During his campaign, Evers signaled stronger financial support for the UW System, including funding to fully offset the ongoing in-state tuition freeze that was enacted under former Governor Scott Walker in 2013. The system received a $36 million increase in the current budget, following a substantial $250 million cut in 2015. To help generate revenue, UW–Madison has increased tuition for out-of-state students and professional degree programs over the past four years.

“We talked about how what’s best for our kids is what’s best for our state,” Evers said in his inauguration address. “And that means we need to fully fund our public schools at every level … from all-day pre-K to our university and technical college systems.”