When Dong-Soo Hur MS’68, PhD’71 was named a Distinguished Alumni Award winner in 2011, he was unable to travel to campus to accept the honor. But his alma mater was still very much on his mind, and this past July, he received the award at a dinner at the Madison Club during an activity-packed visit to campus with other Korean alumni.

Hur is the chair of the board of GS Caltex, the oldest private oil company in South Korea. Known as “Mr. Oil,” he has been a tireless advocate of diversification and sustainability, leading the company into the gas, fuel cell, and renewable energy industries.

While on campus, he enjoyed a luncheon at the home of Emeritus Professor Hyuk Yu, who was one of Hur’s advisers and who is originally from South Korea. He also toured the Wisconsin Energy Institute and the College of Engineering and met with key chemical engineering faculty. Then it was on to view the new Goodspeed Family Pier and the site of the future Alumni Park during a pontoon boat tour on Lake Mendota. Hur, who is a member of the UW Foundation’s prestigious Van Hise Society, also accepted an invitation to become a member of the foundation’s board of directors.

Several current and former chapter leaders from the WAA: Korea Chapter accompanied him on his vist and participated in campus tours and outings. The group discussed several potential programs to further strengthen the ties between the university and South Korea.

“It was wonderful to have the opportunity to thank and honor such a distinguished alum as Dr. Hur for his amazing leadership in South Korea and his service to the university,” said WAA President and CEO Paula Bonner. “He and the other Korean alumni are extraordinary examples of the commitment and service to this institution that exist no matter where alumni are in the world.” 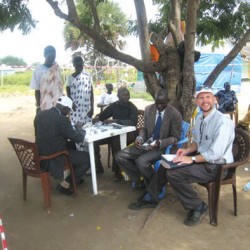