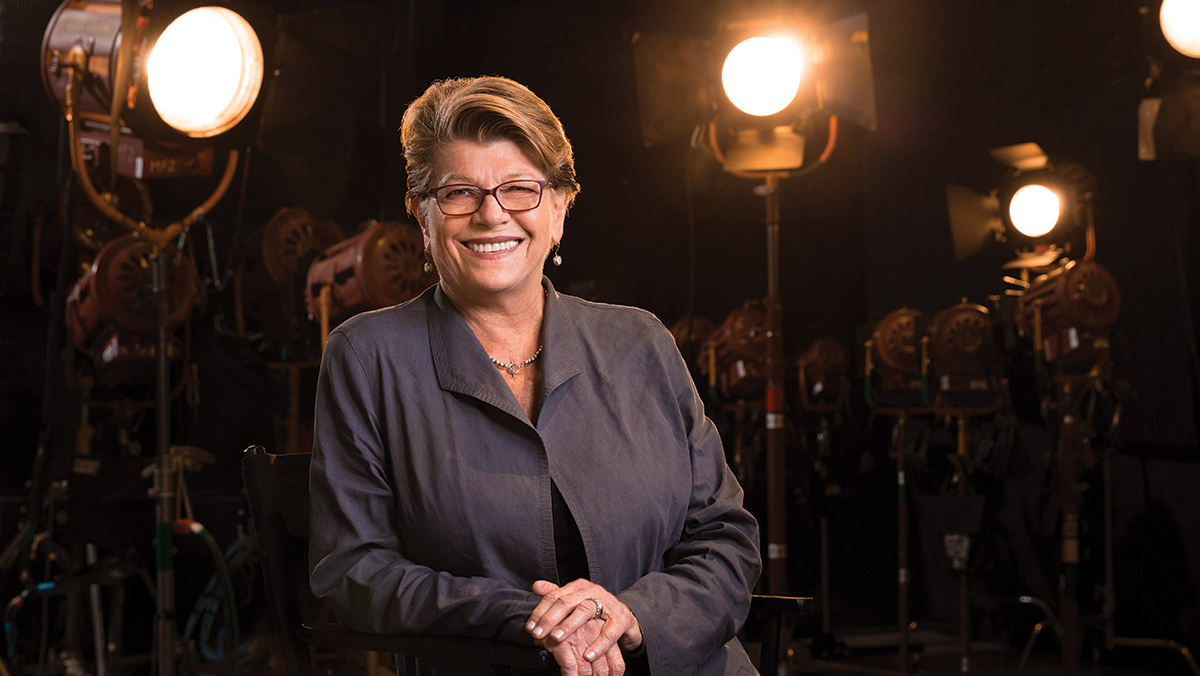 Jennifer Warren ’63 leads the charge to put more women behind the camera.

In the wedding portrait, a radiant Jennifer Warren ’63 wears a flower lace gown and a modest string of pearls as she stands next to her equally resplendent bridegroom, the tuxedo-clad matinee idol Paul Newman.

But the couple (notwithstanding Newman’s lengthy marriage to actress Joanne Woodward) couldn’t be found on any gift registry. That’s because the photo was taken for the 1977 film Slap Shot, the cult-favorite hockey comedy in which Newman and Warren play the estranged Reggie and Francine Dunlop, he a player-coach for the woeful Charlestown Chiefs. Fed up with Reggie’s raffish ways, Francine, in the shadow of the then-roiling women’s liberation movement, leaves her husband for parts unknown.

Warren laughs about it today.

“Not only was I married to Paul Newman, but I chose to leave him,” she says, acknowledging her costar’s sexual magnetism and widely acknowledged reputation as a real-life good guy. “Now, that’s acting!”

Today at 75, Warren’s ongoing work is no act. That path out of the fictional Charlestown, it turns out, led her to a different calling. She is the founder and chair of the Alliance of Women Directors, a 20-year-old nonprofit in Los Angeles that has confronted — patiently and persistently — a calcified Hollywood reality: of the top 100 films released in 2016, women directed only 4 percent; women directed 17 percent of all TV episodes in 2015–16.

The Alliance, which offers regular tradecraft workshops and mentorship opportunities, serves as a central gathering place for women trying to break through the so-called celluloid ceiling. That Warren is leading the charge is no surprise to those who know her.

“Jennifer is a visionary who realizes that there’s strength in numbers,” says Jacqui Barcos, an Alliance board member with writing, producing, and directing credits. “She’s really the godmother of bringing women together in a professional alliance, where we can all rise up and support one another.”

The proportion of female directors has held stubbornly constant over the past two decades, but the conversation has slowly gained traction as Hollywood engages in a broader dialogue about the need for more voices reflecting the perspectives of women and minorities. In 2016, the president of the Academy of Motion Picture Arts and Sciences, which awards the Oscars, launched an effort to expand the organization’s voting rolls to include more members with diverse backgrounds.

Other forces are coalescing. The Equal Employment Opportunity Commission and the Office of Federal Contract Compliance Programs are investigating discrimination allegations in the directing ranks. The probe, industry watchers say, could spur rules that would force studios to at least consider female directors for jobs.

“The last year and a half, maybe two years, is the first time that the issue has moved an inch,” Warren says. “People are coming to the Alliance saying, ‘We want a female director for our film.’ The agents aren’t very helpful. They’ll say, ‘There are only a couple,’ but I’ve got a website listing 250 directors, all women. The problem is, it’s a lousy industry and the men have controlled it.”

Warren knows the gender divide firsthand. After starring in films including Night Moves (opposite Gene Hackman) and Fatal Beauty (with Whoopi Goldberg), the roles dried up in her 40s. She was accepted into the Directing Workshop for Women at the American Film Institute, and she went on to direct features including The Beans of Egypt, Maine (a “Best Pick” at the Boston and Seattle film festivals), and Partners in Crime with actors Rutger Hauer and Paulina Porizkova.

Warren also coproduced the short documentary You Don’t Have to Die, about a boy’s battle with cancer, which won an Academy Award in 1989.

For Warren, who teaches directing as an associate professor of practice in the School of Cinematic Arts at the University of Southern California, advocating on behalf of female directors is a matter of perspective.

“When you see stories about girls and women, why would the choice of a male director be better than a female director?” she asks. “Women do see the world slightly differently, and we have different values to some degree.”

Women fare little better in front of the camera, research finds. In 2015, just 31.4 percent of actors with speaking roles in the top 100 films were women, according to a study by the USC Annenberg School for Communication and Journalism. That number has not significantly changed since 2007.

Warren criticized 2016’s Ghostbusters reboot, which starred female leads but was helmed by a male director, Paul Feig. “It had all of these women, but Paul pushed it into making it about male humor,” she says. “I was really disappointed.”

“I mean, she was supposedly a wife, but she was directed to be this sex object for Schwarzenegger,” Warren says. “It was the most off-putting representation of a relationship. It could’ve been written by Trump. Oh, I was so angry.”

As for the newly minted commander-in-chief, Warren, an avowed liberal, offers a backhanded compliment.

“We really have to thank Mr. Trump for making misogyny and female-bashing an accepted thing now,” Warren says. “All of a sudden, it’s a real issue.” 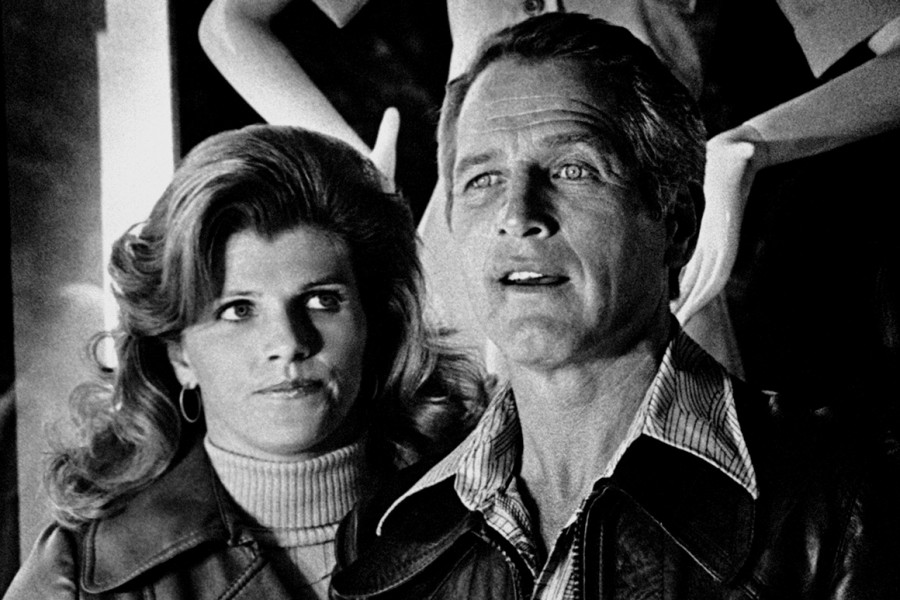 “When you see stories about girls and women, why would the choice of a male director be better than a female director?”

Warren is well suited to navigate Hollywood turpitude, says Steve Albrezzi, a director and associate professor of practice at USC’s School of Cinematic Arts. The pair has known each other for more than two decades, and Albrezzi cast Warren in his most recent film, Commencement, about multiple generations of a Southern California family. Studio negotiations for acquiring the film are under way.

“Edward Albee said [that] to be in this business you need the skin of an alligator and the heart of a baby,” Albrezzi says. “Always in the midst of great tension, Jennifer has the ability to defuse it. She’s a very strong and centered woman, and at the same time she’s somehow remained vulnerable and sensitive. You need that in order to do the work.”

One of Warren’s close friends is Rosilyn Heller ’59, who was the first woman vice president of a major Hollywood studio when she took on the role for Columbia Pictures in 1973. “Like me, she doesn’t take no for an answer,” Heller says. “I think women still try to accommodate men. They try to fit in, they try not to make waves.”

Heller and Warren’s relationship was cemented by common experiences in a cutthroat industry. Both women, Heller says, have found success “by being better than the others.”

Part of the Alliance’s work means acknowledging those who are effecting change. In 2016 it held its inaugural AWD Awards and Benefit, at which it honored producer Greg Berlanti, whose six current TV shows include Supergirl, The Flash, and Blindspot. Berlanti is a vocal proponent of assembling gender-balanced film crews. The Alliance also honored Ilene Chaiken, showrunner for the Fox music drama Empire.

Elsewhere, advances are afoot. For the second season of Netflix’s Marvel superhero vehicle Jessica Jones, women will direct all 13 episodes. Such developments are hailed as a victory for the Alliance, and for Warren’s long advocacy career.

Her own journey to Hollywood started as a young girl growing up in Greenwich Village.

There, she and her mother, stage actress Paula Bauersmith, reveled in the film comedies of London-based Ealing Studios, whose offerings included The Lavender Hill Mob, starring Alec Guinness.

Warren enrolled at UW–Madison in large part to get away from the East Coast, but also because the university was palpably political. “In New York you’re exposed to politics,” she says, “and I was always active.” She was in Madison at the same time the House Un-American Activities Committee was investigating allegations of Communism in America during the early Cold War.

The art history major performed in several campus stage productions, and served as the head of lighting for all stages at the Memorial Union in her last year on campus. Even though she never took a theater class, the theater department nominated her for a McKnight Fellowship — which she won — at Minneapolis’s renowned Guthrie Theater.

“It’s unheard of to nominate somebody who’s never been in your department, and it really was an extraordinary thing for them to do,” Warren says. “It certainly was a pivotal moment.”

She launched her own stage career, winning a Theatre World Award in 1972 for her Broadway debut in 6 Rms Riv Vu. Warren later married the late Hollywood producer Roger Gimbel, winner of 18 Emmy Awards for his more than 50 TV films and specials.

In a career full of memories, one of Warren’s best loved sits framed on a “shelf of favorite things” (which includes pieces of meteorite and a small Inca statue) in her Brentwood, California, home office: that same wedding photo from Slap Shot. In it, Newman’s baby blues gaze out from another time. The future lay ahead for the attractive couple — a future ostensibly full of hope and promise.

For Warren, the future is now, and promise is being realized incrementally. While many of her earliest Alliance collaborators move on to other pursuits, “I’m the one who has stayed and pushed it up the hill for almost 20 years.

“In this business, you have to develop a Zen-like view of life in order to not have it make you crazy,” Warren adds. “I’m a very impatient person, but I must say, I now view this as a process.”

Andrew Faught is a freelance writer based in California.