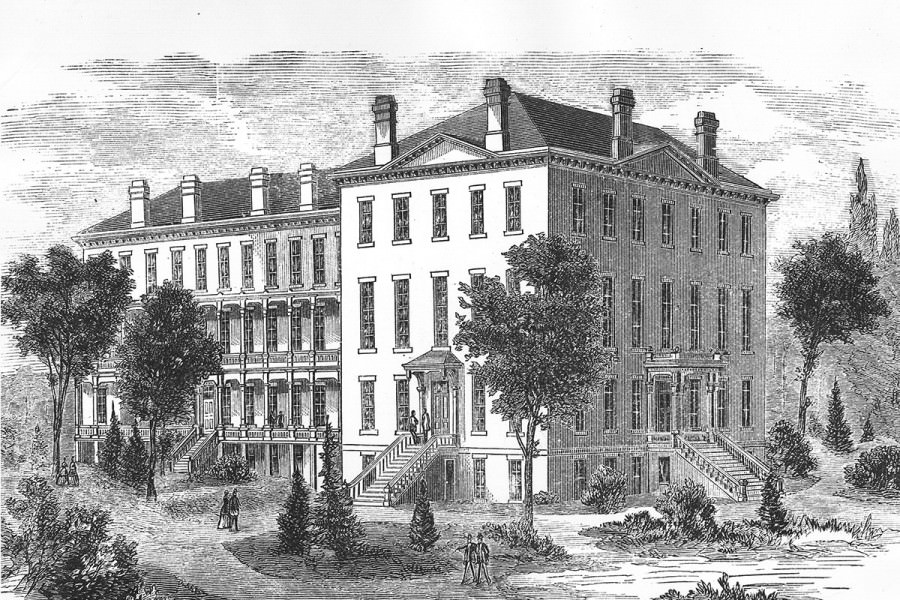 If you had been a female student at the UW in the late 1860s, your first year would have included the not-so-challenging courses listed below. For a brief period in its early days, the University of Wisconsin had a special college known as the Female College. Although the university began welcoming women in 1863 — partly to boost enrollment when many male students enlisted in the Civil War — the practice was short-lived.

When the UW recruited Paul Chadbourne, an opponent of coeducation, to serve as president in 1867, he made it a condition of his employment that the university segregate by gender. He believed that in allowing men and women to study together, “you have an element of incalculable mischief introduced into the institution.”

As a result, the Female College, located in South Hall, opened in 1867 with its own headmistress and curriculum. The innovation was not popular with its students. Jennie Field Bashford 1874 wrote, “The feminine mind was kept in a constant state of irritation by the subordinate position assigned to it at the University.”

Jennie Muzzy Covert 1872, writing in the March 1901 Wisconsin Alumni Magazine, noted, “When I entered, the experimental policy of a ‘ladies’ department’ had given rise to a most anomalous and unsatisfactory condition of affairs. … The young women were coming, craving opportunities for growth and mental development, and finding the restrictions imposed upon them more and more irksome and galling. This feeling of turbulent unrest and dissatisfaction reached its zenith … in 1870 and 1871, and particularly through the senior girls of the class of ’70. A quartette of forceful, brainy, spirited young women, they were pronounced leaders in denouncing offensive rules and regulations, in scheming to obtain larger liberties, and in general mutinous conduct.”

With Chadbourne’s departure in 1871, the university soon reaffirmed its commitment to coeducation, partly because it was inefficient to maintain two separate colleges. The newly constructed Ladies Hall (shown above) served as the women’s dormitory, but they were once again allowed to attend classes with men. Ladies Hall was later named Chadbourne Hall by acting president Edward Birge to commemorate “Dr. Chadbourne’s contumacy regarding coeducation.”