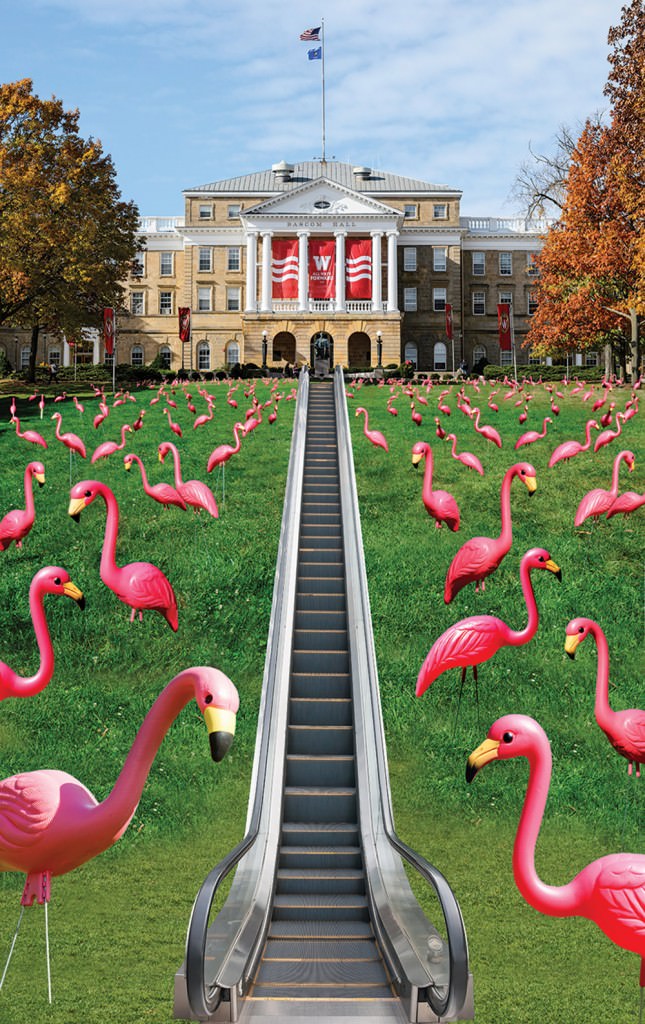 UW–Madison can lay claim to something no other college can: an entire era of campus pranks.

Neil Steinberg, a columnist for the Chicago Sun-Times and something of an expert on college pranks, devoted a whole chapter (and the cover) of his 1992 book, If at All Possible, Involve a Cow: The Book of College Pranks, to the UW’s culture of comedy. He credits legendary campus pranksters Leon Varjian x’83 and James Mallon ’79 for “creat[ing] something even rarer than a single great prank — an atmosphere of great pranking. A Golden Age.”

Within a week of arriving at the UW in 1977, Varjian started a petition to formally change the UW’s name to the University of New Jersey. His pitch? UW graduates could finally boast of receiving an elite East Coast education. Together, Varjian and Mallon formed the Pail and Shovel Party and took over student government from 1978 to 1980. One of the party’s early proposals was to convert the government’s full budget into pennies, only to be sprinkled over Library Mall and collected by students with pails and shovels.

Varjian and Mallon pulled off the two most recognizable pranks in UW history: bringing the Statue of Liberty (submerged in ice and first replicated using chicken wire, plywood, and papier-mâché) to Lake Mendota and introducing a flock of more than 1,000 (plastic) pink flamingos to Bascom Hill.

In between, the Pail and Shovel Party provided consistent comic relief: proposing to change all students’ names to Joe Smith so instructors could finally know their large class rosters by name; mailing out postcards declaring war on other college governments (in response, four University of Missouri students “nuked” Madison by dumping 500 pounds of manure on the front steps of Memorial Union); hosting an Animal House–inspired toga party for 10,000 people (complete with an endorsement call from actor John Belushi); and employing a full-size construction crane to unveil a five-inch replica of the Washington Monument on Library Mall.

But not all campus humor has aged well. The UW was home to the earliest college “panty raid” on record, according to Steinberg’s book.

In 1899, hundreds of male students had planned a visit to Ladies Hall (later renamed Chadbourne) to serenade its residents. Some of the students went rogue, breaking into the hall’s laundry room and stealing more than 200 garments. The women responded with a threat of “no social relations with the men of the University” until the offenders were brought to justice. Much of the clothing was eventually returned, and 13 male students were either suspended or expelled.

The university itself has occasionally joined in on the fun. On April 1, 2013, the UW’s social media accounts announced a controversial campus construction project: turning a Bascom Hill sidewalk into an outdoor escalator, or “Bascavator.” One of the many mixed responses on social media read: “Really??? We’ve become THAT lazy that tax dollars and education funds need to be used for laziness?! A sad day in education … ”

The Bascavator, of course, was an April Fool’s Day prank.