When former student Leon Varjian passed away last September, UW–Madison lost one of its true legends. Varjian, who was the vice president of the university’s student government from 1978 to 1980, was a leader of the Pail and Shovel Party, the outfit that put the Statue of Liberty on Lake Mendota and brought pink flamingos to Bascom Hill.

When the Pail and Shovel Party arrived in Madison in the 1970s, the campus had nearly worn itself out with political earnestness. Opposition to the Vietnam War led to riots and the bombing of Sterling Hall; civil rights demonstrations evolved into a student strike.

Into this scene stepped Varjian, a graduate student from New Jersey with a sense for street theater. Varjian and Jim Mallon ’79 created the Pail and Shovel Party with the openly stated intent of wasting as much time and money as possible. (The party’s name came from a proposal to exchange the entire budget of the Wisconsin Student Association [WSA] for pennies, and then give it all away on Library Mall, where students could scoop up their refunds with buckets.)

While at Wisconsin, Varjian was a more successful politician than student. He got himself elected WSA’s vice president for two years, but he never finished a degree — in fact, he appears to have earned only one academic credit.

The photo above shows one of his Madison pranks: a boom box parade that had Varjian and his cardinal-clad crew high-stepping through downtown Madison with giant radios, tuned to stations playing march music, on June 1, 1983. It followed “the First Annual April Fool’s Boom Box Parade,” which was held on April 1, 1982. 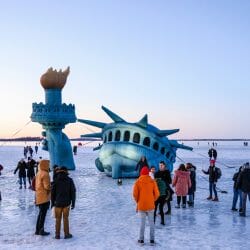