Band alumni are in step with a project to upgrade the practice field.

Five hundred and eighty-two knees couldn’t be happier. Band members (to whom those knees belong) are stepping livelier on their new practice field these days, thanks to the University of Wisconsin Band Alumni Association (UWBAA).

Although it’s hard to imagine, when Professor Mike Leckrone first took on the job of band director in 1968, he had to work hard to recruit members. Now, to honor Leckrone’s forty years at the helm of “the best band in the land,” the UWBAA has created Project Forty.

According to trombonist Dean Teofilo ’85, president of the UWBAA, over the years more than five thousand students have endured grueling rehearsals to belong to this exclusive club. When they learned about Project Forty and the plan to upgrade the practice field, they stepped up again. The UWBAA started things off with an initial gift of $25,000. Then band alumni — many first-time donors — responded.

“There are hundreds of alumni with bad knees because of that field,” says Teofilo. “It was two hours a day, four days a week, and the field was either rock hard or muddy. Plus, our athletic style of marching can really do a number on a field. When we contacted alumni, they realized here was something really worthwhile, and it will ensure Mike’s legacy.”

Located on campus just west of the Natatorium, the new practice field is constructed to withstand repeated use. With material similar to the turf in Camp Randall, it’s expected to make marching easier on the body. Band alumni will try it out when they return for Alumni Band Day in September. Their knees will know for sure. 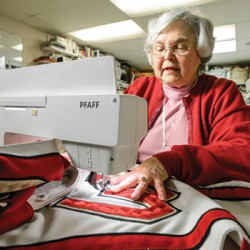