A doctorate from the University of Sarah Vaughan . . . Richard Davis likes to reminisce about his life and career in music.

That’s lucky for his students and for Gwen Evans, a University Communications writer who researched the legendary bassist and UW–Madison music professor for the story on page 36.

Sitting at Davis’s kitchen table, Evans learned that he is a great storyteller, but not your typical academic. He played alongside another famous Davis — Miles — and likes to say that he earned his doctorate from the University of Sarah Vaughan. Before accepting a teaching position at the UW in the 1970s, his response to a friend who advised him to ask for tenure was, “What’s that?”

When it comes to telling stories, Davis draws from a wealth of history. During one conversation with Evans, he veered from making jokes about percussionists, to talking about the boxer Jack Johnson, to sharing thoughts about the Titanic, and back again.

Evans also discovered that Davis is an artist whose generous spirit equals his talent, and he’s eager to share experiences and knowledge with his students. After three decades in the classroom, Davis is still making an impact. He takes joy in watching the light bulb go on, and he notices when students need help.

And as Evans observed during his Black Music Ensemble course, he teaches what might be one of the most important (and often the hardest) skills to learn, both as musicians and as people: how to improvise. Some of his students struggle with improvisation because they began playing instruments by reading sheet music and following it precisely to the note. Davis shows them how to free themselves up, reminding them that just because something is scary doesn’t mean it’s impossible.

In the end, Davis’s philosophy made a lasting impression on Evans. “He approaches every person with an open mind and open heart,” she says. “We can all take a page from that.” 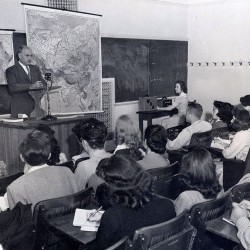