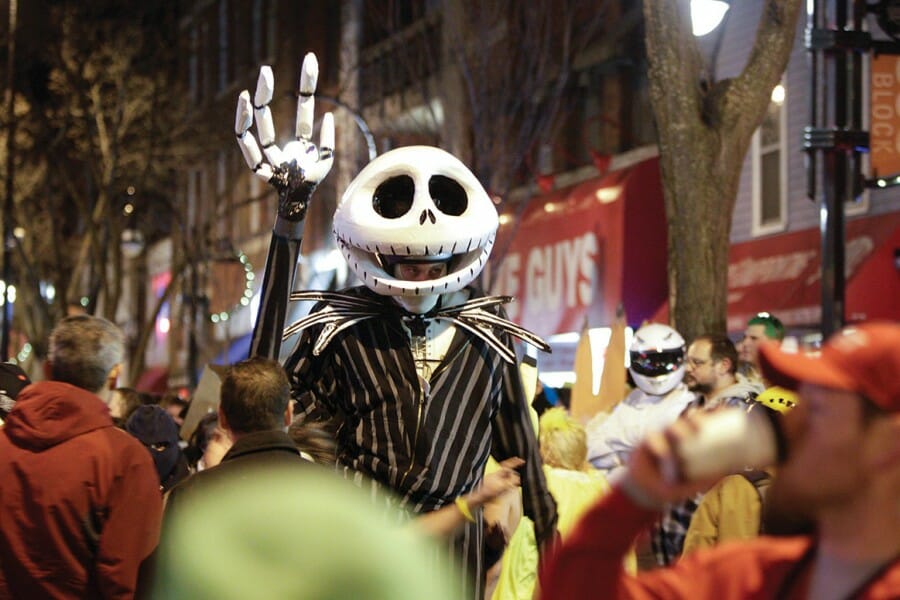 On the one night of the year when it’s perfectly acceptable to be someone (or something) else, there are sure to be just as many tricks as there are treats in Madison.

The city has a history of wild nights when Halloween weekend rolls around. Although the UW has hosted a number of spirited events, such as pumpkin carving and a costume ball at Memorial Union, the soul of Halloween in Madison has long been found on State Street.

Partygoers began flooding into the downtown hub starting in the late 1970s. By the 1980s, as many as 100,000 costumed people — students among them — would line the street and patronize its bars. With informal programming and little crowd control, the event spurred some revelers to set fires, damage property, start fights, and climb light poles. In 1983, a man tragically died after falling from a rooftop.

In 2006, the City of Madison sought to rein in Halloween’s more raucous antics by setting up Freakfest, the region’s largest Halloween festival. In its first year, the gated, ticketed event reduced the number of State Street arrests by nearly 200, from 334 to 148. By 2016, only 13 arrests were made.

Freakfest embraces live music: more than a dozen acts perform across three stages lining State Street. Country stars Kip Moore and Jon Pardi — along with pop groups MisterWives, OK Go, and Timeflies — are among the prominent musicians who have provided a soundtrack for the spooky night.

Although attendance has dropped to a more manageable 30,000 or so per year, there’s no shortage of excitement in the air when All Hallows’ Eve arrives. A summary from the 1982 Badger yearbook rings true today: “If the multitudes of partiers who flock to State Street every year have any say in the matter, rest assured there will never be an end to this most popular of holidays.”