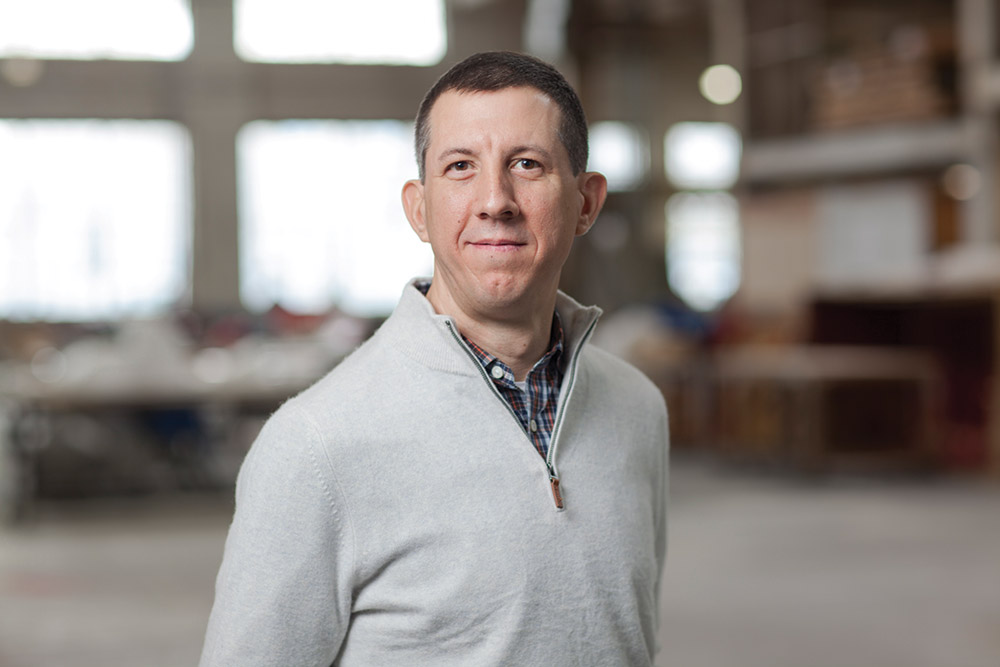 When Barack Obama appeared before cheering crowds in Chicago on the night he won the 2008 election, Brian Stockmaster MFA’98 had a unique connection to the president-elect. The majestic stage in Grant Park had been mapped out, designed, and assembled in less than two weeks under Stockmaster’s supervision at Chicago Scenic Studios (CSS), a design and fabrication firm. The lectern itself had been built only three days earlier.

“There was a sense of pride in being associated with such a moment in history. The energy of the crowd was amazing,” Stockmaster says. Although he had a ticket to go backstage, he chose to stand outside with everyone else, not wanting to get in the way.

A quiet drive to see a job done right has fueled Stockmaster’s work ethic and career. He came to UW–Madison expecting to become an engineer but studied theater technology instead, from pneumatics to architecture to electricity. Upon graduation, he honed his skills at venerable design firms in New York. He worked on Broadway shows (Aida, The Lion King, and Kiss Me, Kate among them) and cable programs, building the first big set for ESPN’s SportsCenter, before taking a position at CSS in 2005.

Preparing for large events can often get stressful. After a 20-foot-wide turntable for displaying cars malfunctioned the night before an important auto show, Stockmaster drove from Chicago to Detroit, pulled apart the elaborate set, repaired the equipment, and had everything back in place before the next morning. “It was a pretty hairy evening,” he admits.

Stockmaster gives a lot of credit for his career path to Dennis Dorn ’70, a UW professor emeritus of theater technology and a mentor to this day. “He was a tough guy, but also very patient,” Stockmaster says. “Dennis is a very thoughtful person, asks great questions, and really does listen.”

Despite CSS’s high-profile projects such as building sets for the Oprah Winfrey Show and constructing the new headquarters of the Chicago Bears at Halas Hall, Stockmaster hasn’t let it go to his head. For him, the set’s the thing — especially when the review of his handiwork could come from the commander in chief.