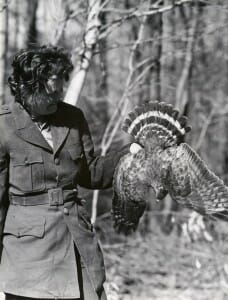 Hamerstrom, one of the UW’s pioneering ecologists, exhibits the tail feathers of a broad-winged hawk in Plainfield, Wisconsin, in 1965. UW Archives Neg. 18146

Frances (Fran — pronounced “Fron”) Hamerstrom MS’40 was a pioneering wildlife ecologist. She and her husband, Frederick, came to the UW to study under Aldo Leopold, and Fran became the first woman to earn a master’s degree in the new field of wildlife management.

Leopold encouraged the couple to help save the endangered greater prairie chicken, a species known for its bright orange air sacs and ritual mating call. The Hamerstroms dedicated years to research and to the effort to provide habitat, and they are credited with stabilizing the birds’ population in Wisconsin.

Early in her career, administrators would hire Frederick and restrict Fran to volunteer positions. As women found more acceptance in the field, Fran became the second woman employed as a wildlife professional in Wisconsin, working for the Wisconsin Department of Natural Resources for decades.

She then researched raptors (hawks, eagles, and owls) and directed the Raptor Research Foundation. A licensed falconer, she banded thousands of raptors during her career. Over the years, the Hamerstroms hosted some 7,000 wildlife apprentices and birders at their antebellum-era home in Plainfield, Wisconsin, which lacked running water and central heating, but did house a couple of live owls. Fran’s passion for studying wildlife led to a host of awards during her 60-year career.

Fran wrote prolifically about her research and also authored a cookbook for game, which revealed that her secret to a perfect piecrust was lard made from bear fat.