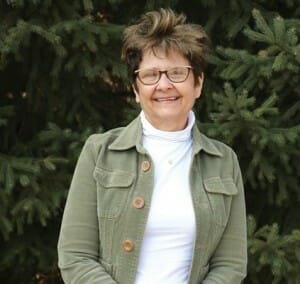 Following a stint as a veterinarian, Larsen found her true passion: drug development for animals. Courtesy of UW School of Pharmacy

First a doctor to animals, Diane Larsen ’80, DVM’90, PhD’99 now develops medicines for them. She heads drug development for the animal division of the global pharmaceutical company Boehringer Ingelheim, planning and supervising national and international research. She finds her work exciting because “it’s such a nice mix of basic science and veterinary medicine with exposure to marketing and manufacturing.”

Larsen oversaw development of NexGard, a chewable flea and tick control product, as well as NexGard Spectra. Throughout her time in the industry, Larsen has seen a shift toward products focused on ease of use — for example, medicines that are longer-acting or taste good to pets. “If owners have to pill their animal, that is something they don’t want to do. But if they’re giving them a treat, that’s a totally different story,” she says.

Larsen encourages UW veterinary medical students to be open to a range of careers. She initially worked as a veterinarian but was surprised to discover that she had a fascination with animal drug development. So when the SVM launched a PhD program specifically for those with DVM degrees, she returned to campus, earning her second doctorate while conducting influenza research.

When a position opened at Merial, a multinational animal health company, she made the move to industry. Merial was eventually acquired by Boehringer Ingelheim. Although Larsen is headquartered in Duluth, Georgia, she travels often to Boehringer Ingelheim offices in France, Germany, Japan, and other locations.