The campus community takes action after a Homecoming video controversy.

Last September, the student Homecoming Committee released a video that failed to represent the diversity of UW–Madison. The committee had invited students of color to participate in the taping but didn’t include them in the final product, stirring anger on campus and regret from those in charge.

“We apologize that the video produced by the committee gave only a partial representation of the UW–Madison student body,” says Sarah Schutt, executive director of the Wisconsin Alumni Association (WAA), which sponsors the Homecoming Committee. “WAA is deeply committed to diversity and inclusion and will listen to our student, alumni, and campus partners on ways to move forward.”

In response to the Homecoming video, a new group called the Student Inclusion Coalition partnered with university administration on a video about students of color and their struggles on campus. Called “We Are UW,” the video played at halftime during the Badger football game on October 12 and affirmed that “we learn lessons best when we learn them together.”

WAA has committed to changes that would make student Homecoming a more inclusive event. The plan includes better training and oversight, as well as measures to diversify student organizations. The Student Inclusion Coalition offered its own ideas for a more inclusive campus, working with Vice Chancellor for Student Affairs Lori Reesor and Deputy Vice Chancellor for Diversity and Inclusion Patrick Sims.

“We stand with our students of color and hear their voices with a clear commitment to action,” said a joint statement from UW–Madison and WAA, “not only about the video, but their broader experiences of exclusion on campus.” 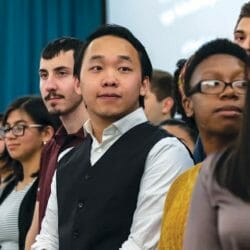 A Scholarship Inspired by Love