We at On Wisconsin would like to introduce you to new football coach Paul Chryst ’88, who was appointed to his job in December. We’d like to, but it’s probable that you already know him, given that he’s been part of the Madison scene for half a century. Here are highlights of his association with the city and university.

1986–88: Quarterback for the Badgers under coach Don Morton; the team’s highest finish in the Big Ten came in 1988, when the 1-10 Badgers finished in ninth place

2006–11: Offensive coordinator; under head coach Bret Bielema, Chryst built the UW into an offensive force that went to Rose Bowls in 2010 and 2011 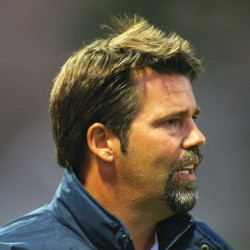