The new student union is scheduled to open in March 2011, with a name that will seem pretty familiar to alumni and students. Courtesy of Workshop Architects, Inc. And Moody Nolan, Inc.

Five hundred possibilities were narrowed to just four … and then one.

One thing is certain. The new student union under construction where Union South once stood won’t be named for Barry Alvarez, Ron Dayne x’00, or Mike Leckrone. Neither comedian Stephen Colbert nor movie character Derek Zoolander will get the honor, either.

All were among suggestions from students, faculty, and staff to rechristen the new union being built on the site of the old Union South. The building is scheduled to open in March 2011.

Associated Students of Madison, UW-Madison’s student government, narrowed the list of more than five hundred nominations to just four: Discovery Union, Randall Union, Varsity Union, and Union South. Discovery Union references the building’s neighbor across Johnson Street, the new Wisconsin Institutes for Discovery. Randall Union is a nod to its street address, and Varsity Union is for the time-honored school song, “Varsity.” Union South requires no explanation, and could have been on the list for people uncomfortable with change.

Students voted for their favorite of the four names in a campuswide election in April. The winner? Union South. It’s the second time UW-Madison students have had a vote in connection with the new union; in 2006, they voted to pay higher fees to cover the costs of renovating Memorial Union and building the new union.

Now it’s up to Chancellor Biddy Martin PhD’85 to give final approval, but even then, a large donor could become part of the union’s new name at a later date. Lady Gaga Union South, anyone? 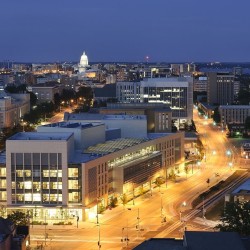