When it’s time for tests, professors get them, too.

Students aren’t alone when it comes to exam nerves: it turns out that some professors grapple with worry and angst at test time, too.

“I look out and see two hundred students with their #2 pencils and their Diet Cokes, looking kind of scruffy and tense,” says Jenny Saffran, a UW psychology professor. “And I feel nervous — in part, because it’s my fault that they are nervous.”

Saffran, who received the Chancellor’s Award for Distinguished Teaching in 2009, says that exams have gotten a little less nerve-wracking for her over the years. But she still gets “a sense of dread” after the test has been passed out.

“Are the questions too hard? Are they too easy? Did I make all the studying worthwhile for them?” she asks, ticking off the doubts that still assail her.

Eric Hoyt, an assistant professor of communication arts, has faced down his own demons after exams were turned in. “You see it in the blue books if you wrote questions poorly,” he says. “You wonder, why did I make them go through this?”

Hoyt always includes short-answer and essay questions on his exams.

“As a humanities professor, I am always hoping they have made connections to the broader world,” he says. “How does what they’re learning fit into their lives, and what they want to do?”

Saffran, on the other hand, gives multiple-choice exams that burrow deep into the material. Earlier in her teaching career, she could spend up to a full work week crafting an exam with a minimum of sixty questions. To determine whether those questions are good or bad, Saffran “grades” herself. If most of the students who performed well on the exam, overall, answered a question right — but students who performed poorly on the exam, overall, got it wrong — then the question is good. A bad question is one that everybody got right or everybody got wrong.

“I have this sort of data for every question on every exam I have ever given,” she says. “I’ve used it to help me improve my exams over time.”

Psychology professor Seth Pollak, himself a recipient of a Distinguished Teaching Award in 2001, says that early in his career, his biggest exam-related fear was always that he wasn’t being fair.

“It’s a terrible thing to hear from a student,” he says.

Now Pollak tries to focus on the big picture. “What are your professors thinking? They’re thinking that they want you to walk away with stuff that won’t disappear the minute the exam is over,” he says. “It feels good to give a challenging exam and say, ‘These students got this.’ ” 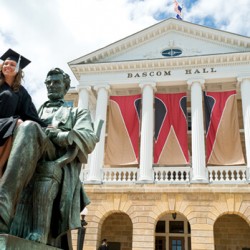