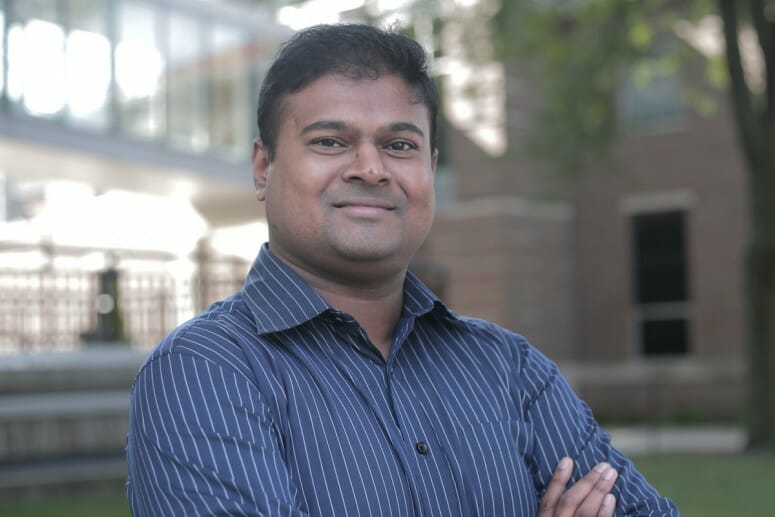 Thevamaran has laid the groundwork for carbon nanotube use in lightweight, high-performance armor materials, such as bulletproof vests or spacecraft shields.

UW–Madison engineers have created a nanofiber material that outperforms steel plates and Kevlar fabric to protect against bullets and other high-speed impacts.

“Our nanofiber mats exhibit protective properties that far surpass other material systems at much lighter weight,” says Ramathasan Thevamaran, a UW–Madison assistant professor of engineering physics who led the research.

The material resembles cloth tape but is much stronger. To create it, Thevamaran and postdoctoral researcher Jizhe Cai mixed multi-walled carbon nanotubes — carbon cylinders just one atom thick in each layer — with Kevlar nanofibers. The resulting nanofiber mats are superior at dissipating energy from the impact of fast-moving tiny projectiles.

The advance lays the groundwork for carbon nanotube use in lightweight, high-performance armor materials — for example, in bulletproof vests or in spacecraft shields to mitigate damage from flying microdebris.

“Nano-fibrous materials are very attractive for protective applications because nanoscale fibers have outstanding strength, toughness, and stiffness compared to macroscale fibers,” Thevamaran says. “Carbon nanotube mats have shown the best energy absorption so far, and we wanted to see if we could further improve their performance.”

“The hydrogen bond is a dynamic bond, which means it can continuously break and re-form again, allowing it to dissipate a high amount of energy through this dynamic process,” Thevamaran says.

The researchers tested their new material using a microprojectile impact-testing system in Thevamaran’s lab. One of only a handful like it in the United States, the system uses lasers to shoot micro-bullets into the material samples.

In addition to its impact resistance, another advantage of the new nanofiber material is that, like Kevlar, it is stable at both very high and very low temperatures, making it useful for applications in a wide range of extreme environments.