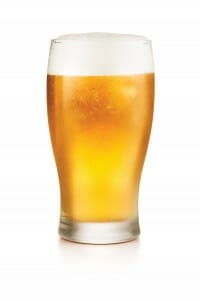 When it comes to beer, UW geneticist Chris Todd Hittinger PhD’07 goes a little wild — at least with his yeast.

Hittinger studies microbes, and in 2011, he and an international team discovered a yeast species called Saccharomyces eubayanus, which is the wild ancestor of what brewers use to make lagers. Ales — an older form of beer — ferment at relatively high temperatures using a yeast called Saccharomyces cerevisiae. In the 15th century, brewers in central Europe began looking for ways to work in colder temperatures, and they inadvertently crossbred S. cerevisiae with S. eubayanus to invent lagers.

After isolating wild S. eubayanus with his students in 2014, Hittinger worked with brewers such as Heineken and the Wisconsin Brewing Company to create beers using the yeast’s original form. They take longer to ferment, he says, and have a distinctive flavor.

“They aren’t able to convert sugars as fully as industrial yeasts, so the wild version is sweeter, more cloying,” he says. “It has a spicier flavor, like smoke or cloves. And it has a lower alcohol content.”