A Bridge between Cultures Fangdi Pan, Cecilia Miao and Muge Niu (left to right) produced a series of videos with the goal of tearing down the social barrier between Chinese and American students at UW–Madison. Courtesy of Channel C.

While filing into a conference on campus last spring, Cecilia Miao ’13, Fangdi Pan ’13, and Muge Niu ’13 took a wide glance around the room. They couldn’t help but feel disillusioned with whom they saw — or, rather, whom they didn’t see.

The conference was sponsored by the Wisconsin China Initiative, an effort housed in the Division of International Studies and created to, among other goals, strengthen ties between the UW and higher-education institutions in China. Yet the three Chinese natives saw an absence of American-born students at the conference — a solemn reminder of their first days, weeks, and months on campus.

Back then, they had felt unwelcomed and isolated, struggling to adjust to life in Wisconsin.

“At the beginning,” Miao says, “we all go through a certain type of identity crisis, [asking], ‘Why do I change myself because they like it this way? They don’t really care if that’s the real me.’ ”

The three recent graduates found their own remedies for fitting in, but they are now taking action to ease the transition for future Chinese students. Motivated by their experience at last spring’s conference, they launched Channel C, a YouTube series of talk-show videos that discusses myriad cross-cultural concerns. (The C, they say, can stand for several words — China, communication, conversation, or cross-culture.)

The show’s topics range from standards of beauty, to “the secret of making conversations with different people,” to the initial culture shock of the campus’s party and tailgating atmosphere.

One video — “Why Don’t Chinese Students Speak English?” — has more than 100,000 views and 400 comments. Miao, Pan, and Niu say they never expected to reach such a large audience; they are receiving feedback from undergraduates across the nation, as well as younger Chinese students who aspire to study in the United States. Rather, their goal was to tear down the social barrier between Chinese and American students at the UW — a wall, they say, that has been erected from accumulated disinterest and stereotyping by both groups.

“I sat there [one time],” Niu says, “and thought to myself, ‘This is terrible. I’m living a life that’s no different than if I weren’t in the U.S.’ That totally defeats the purpose of studying abroad.”

Even though the three alumni discovered that cross-cultural interactions don’t always bloom into full friendships, they want students to be more empathetic and less eager to generalize. In time, Miao, Pan, and Niu want to revisit the UW — the same campus that used to feel so isolating — and find an atmosphere in which students don’t think twice before reaching across cultural lines.

“I’m just hoping students in Madison can be more sensitive toward someone with an entirely different background,” Miao says. “I think that’s the goal of liberal arts education, anyway — to be able to talk to and connect with people. And that’s our goal, too.” 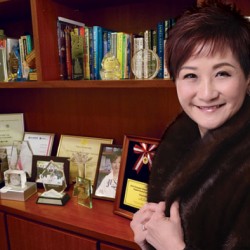