An Outback Bowl To Remember From left are Mike Artus, Kelli Trumble ’79, Emily Artus, Cindy Artus, and Ben Borcher. Emily Artus, who has Apert Syndrome, went to high school with Badger tight end Sam Arneson x’15, and the two became friends. Arneson sent her tickets to the Outback Bowl, and Emily’s hometown of Merrill, Wisconsin, raised money for her to travel to Tampa with her family. One highlight was a game-ball raffle during the Badger HUDDLE®. Trumble, a member of WAA’s President’s Advisory Council, won the raffle and later offered Emily the special football as a memento of her trip. 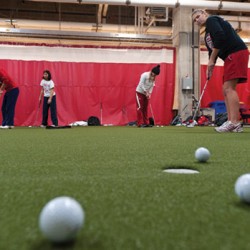