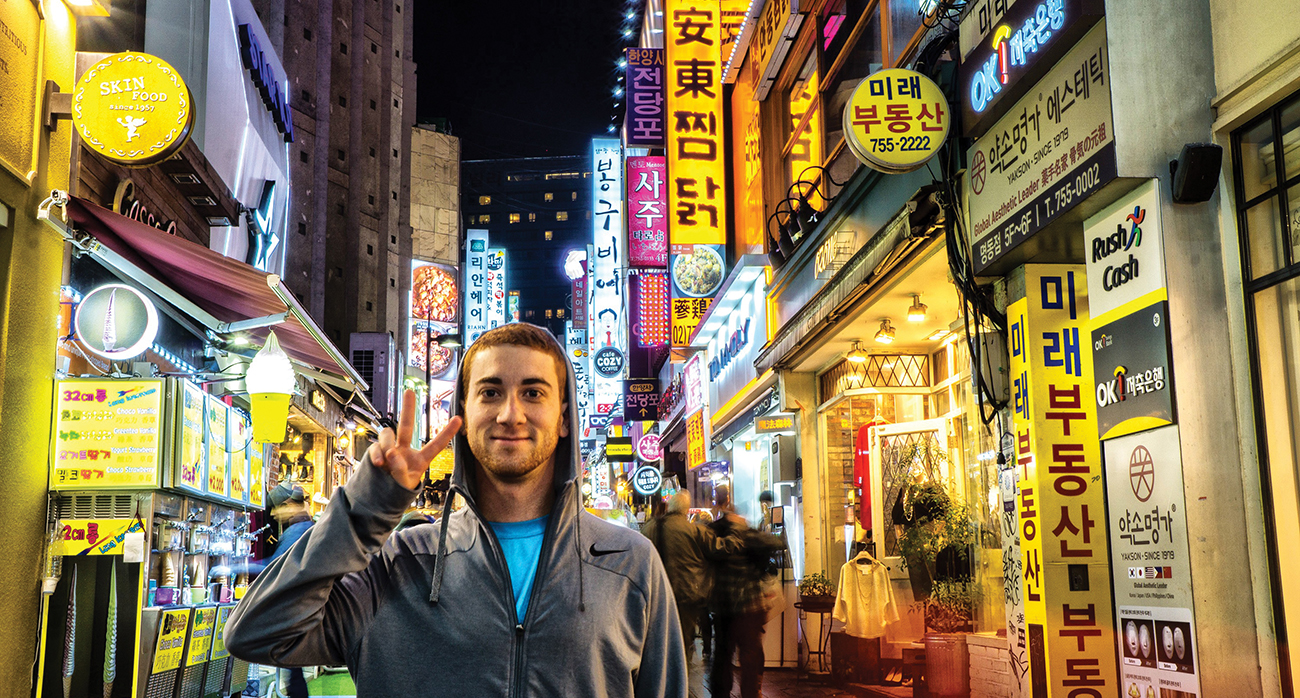 Where in the World Is Drew Binsky?

The popular travel influencer has visited all 197 countries, and he’s just getting started.

Binksy mugs for the camera in South Korea. All photos courtesy of Drew Binsky

On October 29, 2021, a triumphant Drew Binsky ’13 crossed the Saudi Arabian border. “My 197th and final country!” tweeted the 31-year-old video creator, world traveler, and social media personality to an online community of 10 million followers across various platforms. The trip put the final pushpin on Binsky’s map and completed a dizzying goal he’d set six years and one pandemic earlier: to visit every country on the planet.

It’s a journey that, in many respects, began in Wisconsin.

As a geography-loving kid growing up in Scottsdale, Arizona, Binsky always wanted to see the world. Despite a full scholarship offer from the University of Arizona, Binsky — who was born Drew Goldberg; “Binsky” was a nickname given to him by his German-Jewish family — set his sights on UW–Madison. He remembers exactly where he was standing when his mom called to tell him his acceptance had arrived in the mail.

“I still have that letter framed in my room,” he says.

In 2009, he left Arizona for Madison — despite the fact that his forward-thinking father, a Chicago native, insisted they visit the campus in February during a blizzard. “I just loved it,” says Binsky, who was undeterred. “It was just so different and exciting for me.”

At Madison, Binsky scored his first international travel opportunity. He went to Israel through the Jewish Experience of Madison and then spent his junior year abroad in Prague.

“That’s really when everything changed for me,” he says.

He chose Prague for its easy bus or train access to other countries, and that semester, he made it to more than 20. “It was the first time I was introduced to new people, new cultures, new food, new ideas,” says Binsky, who couldn’t get enough. “I was fully hooked. I wanted to create a company, create a travel app, work in travel — I just didn’t really know how yet.” 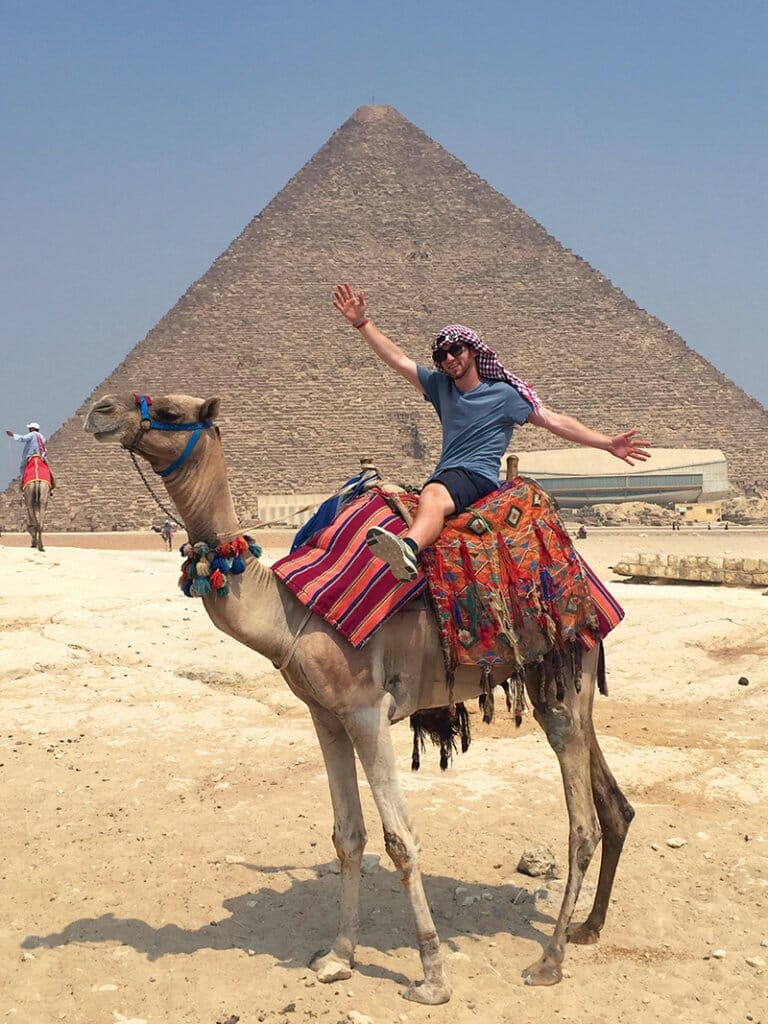 Binsky, who built a DIY student project into a travel video empire with 5 billion views, poses near the Cairo pyramids in Egypt.

Binsky graduated with a double-major in economics and entrepreneurship. In his senior year, he started a travel blog, posting food guides, nightlife guides, and articles like “Top 10 Things to Do in Budapest.” He didn’t exactly have a plan — he just knew he didn’t want to enter corporate America. When one of his travel-abroad friends signed up to teach English for 18 months through the Gyeonggi English Program in Korea, Binsky went down to the offices near College Library to apply — then he was off to South Korea.

“Teaching English was a gateway to basically get paid to travel,” says Binksy, whose round-trip flight, accommodations, food, phone bill, and health insurance were all covered by the program, plus a salary and four weeks of paid vacation. Every weekend he visited another Asian country, gathering fodder for his travel blog, which had begun to attract sponsors and advertisers.

In 2015, on the heels of a three-month solo backpacking trip in India, Binsky met Lee Abbomonte, who at 31 in 2011 had become the youngest man to visit every country in the world. Binsky, then 23 with 40 countries already stamped on his passport, did the math — could he do the same thing in five years?

Binsky began traveling to 20 to 30 countries per year. He tried to stay a week in each place and meet as many locals as he could for experiences that were both authentic and affordable.

“The more I traveled, the more I realized I didn’t know anything about the world,” Binsky says.

In 2016, at a travel convention in Bangkok, he fell in love with a woman named Deanna Sallao, who became his frequent traveling partner. On New Year’s Day in 2017, in Hanoi, Vietnam, she gave him the gift that would change everything: a video camera. “She was like, ‘Hey, you could make videos that last more than 24 hours on Snapchat. Post them on Facebook and YouTube,’ ” recalls Binsky.

A minimalist traveler, he initially balked at carrying more equipment. But he gave it a go, posting his first-ever video on Facebook. Within one day, “What Can $10 Get You in Vietnam?” had 100,000 views, which blew his blogging hits out of the water.

“But the biggest turning point was my seventh video, in April 2017, when I got a camera into North Korea,” he says. “That video reached 10 million views. I pretty much haven’t touched my blog since then.” 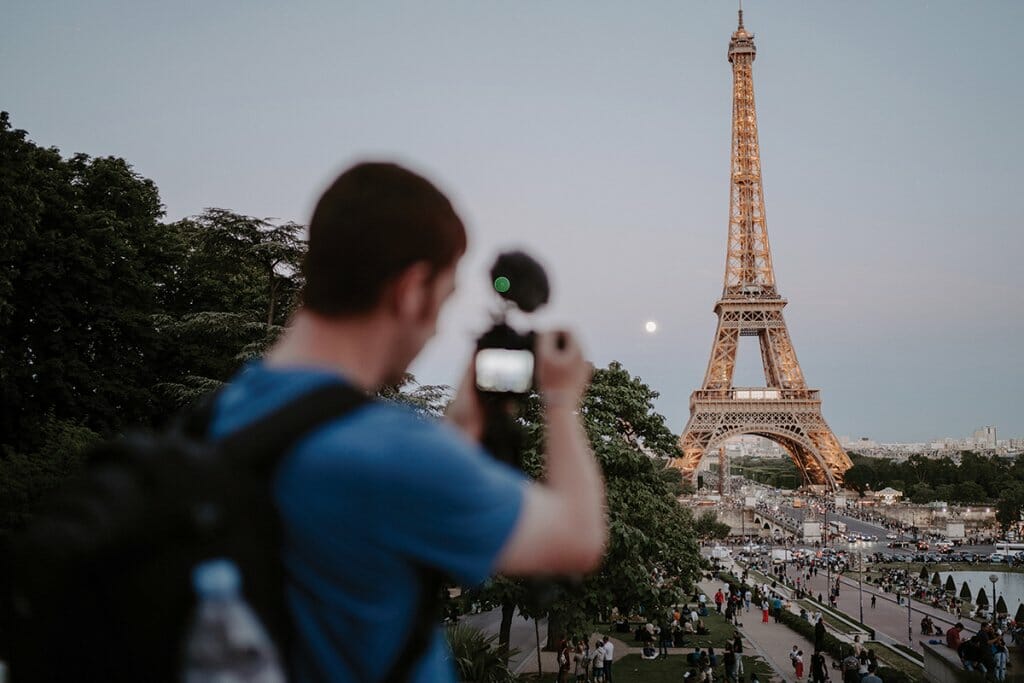 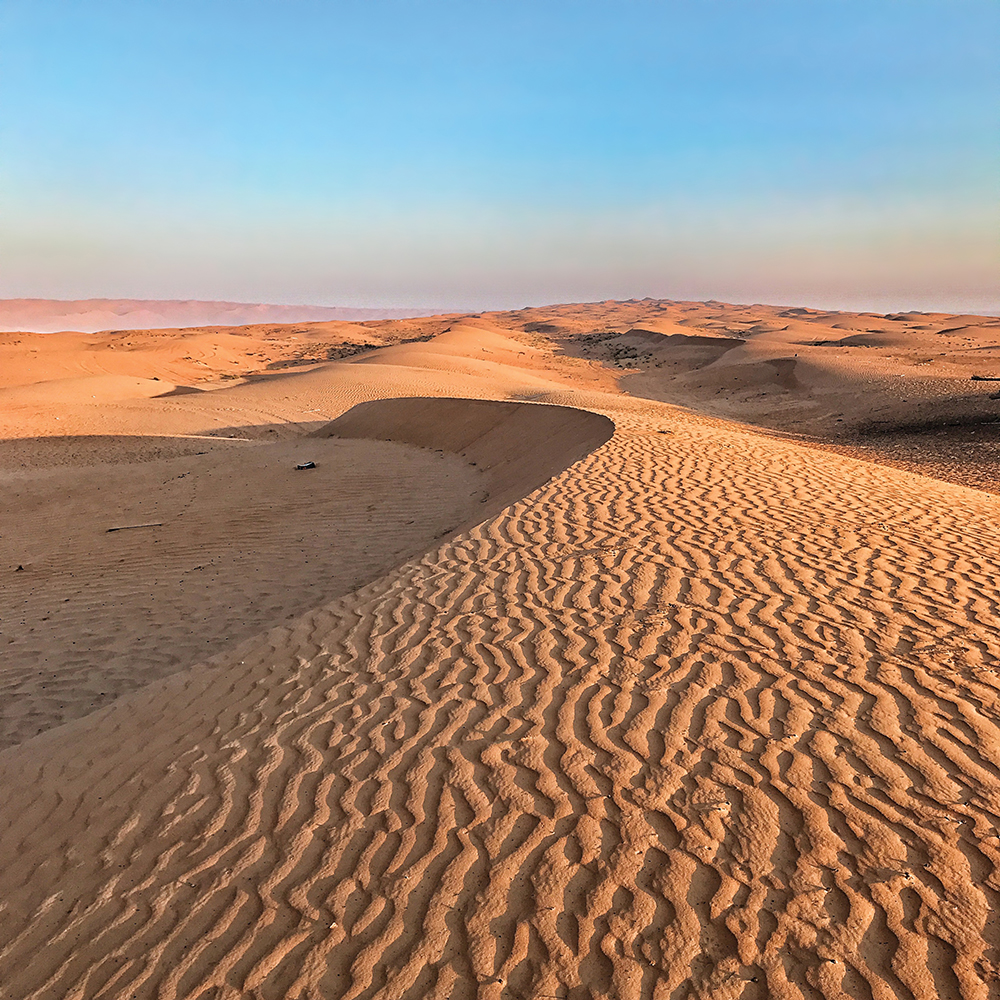 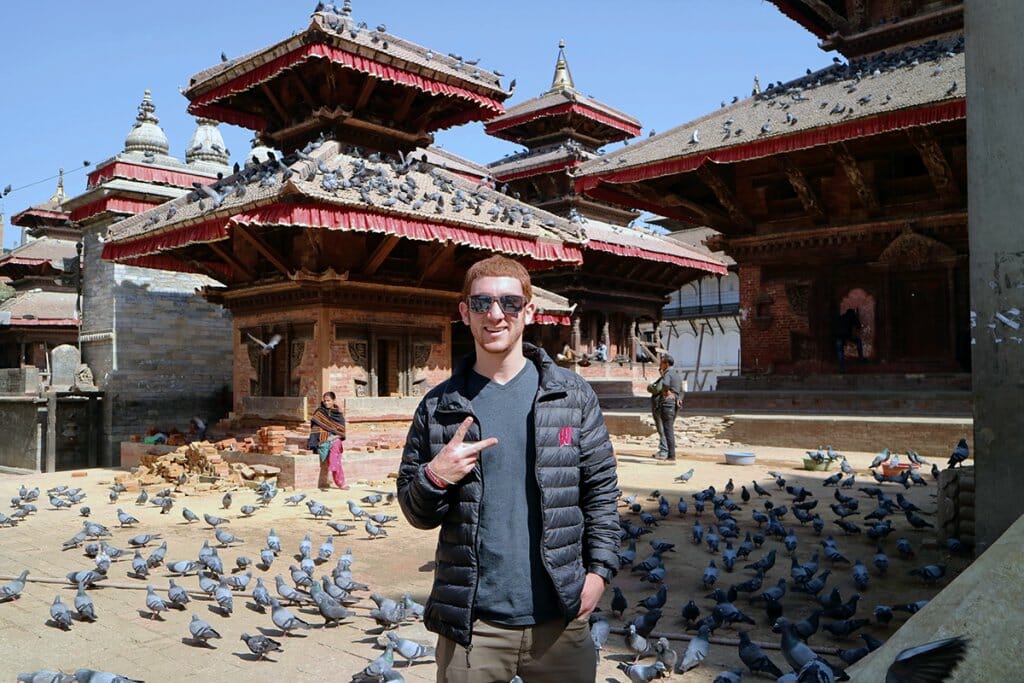 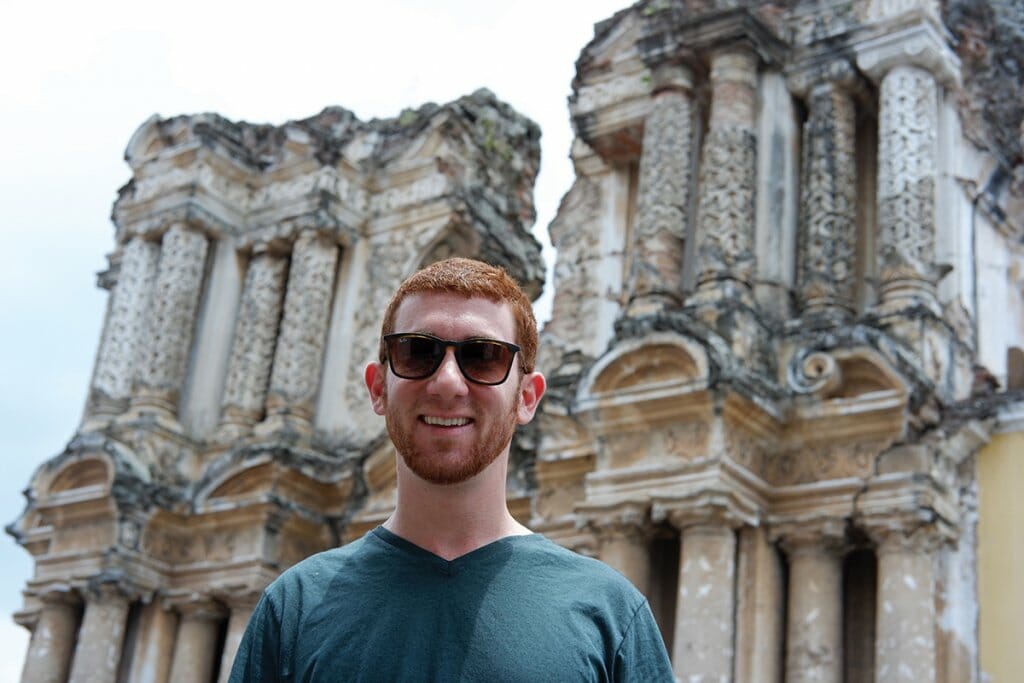 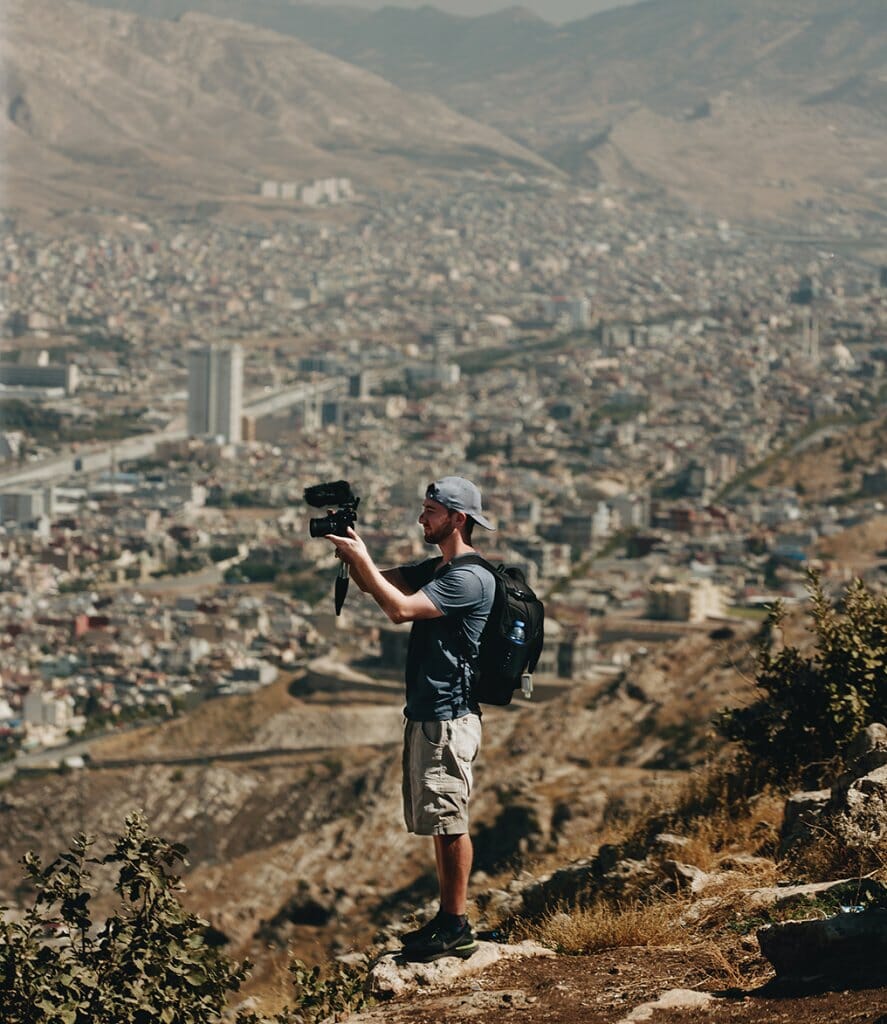 PUSHING THROUGH A PANDEMIC

For the next four years, Binsky did everything himself — scripting, filming, editing, uploading, and responding to comments. Now he has a team of 26 freelancers and subcontractors, and his videos have clocked an astonishing 5 billion views. His business went from bringing in around $15,000 to $30,000 a year before the videos to $250,000 per year in 2019 and $500,000 in 2020 — numbers he freely shares because he hopes to provide inspiration for other independent entrepreneurs and aspiring YouTubers. Most of it goes right back into the business — as long as Binsky can keep traveling, he has no need or desire to update his trusty Honda Civic or fly first class (unless he’s got points). “I’m still really frugal,” he says.

Binsky’s casual, personable approach and honesty about the ways in which Americans may be ignorant of other countries’ cultures and customs have made him relatable to a younger audience. His favorite trips are the places his followers say they’re afraid to visit, such as Lebanon and Iran.

“I love being like, well, there’s actually a really cool life here, and let me show you that life,” Binsky says. He particularly loves the Middle East, including Arabian cuisine and hospitality and the principles of Islam. The more people he meets on his travels, the smaller and more humanized the world becomes.

Although the pandemic grounded him in the United States for several months and torpedoed his original goal of visiting all 197 countries by May 2020, he still managed to navigate canceled flights, visa restrictions, and COVID tests before and after every flight. In 2020, he went to Mexico, Egypt, Lebanon, Dubai, Turkey, Iraq, Afghanistan, Ghana, Tanzania, Ecuador, and Venezuela.

Binsky may have hit his 197th country — and last year married Deanna and bought his first house, back in Arizona — but he’s hardly done traveling. Three months after that triumphant Saudi Arabia trip, he tweeted a photo of himself in Russia on a subzero day, frost encrusting his goatee and fur-lined hat. He continues to build an interactive community with weekly YouTube videos, and he’s getting in on the nonfungible token craze with a collection of “travel tokens” on his website. In 2021, he launched a three-hour, $200 online “travel hacking” master class.

“Now that I’ve finished the countries, I’ll be a little more selective about which countries I want to revisit and which stories I want to tell,” says Binsky. “It’s all about the stories now. I don’t care if I’m in Madison or Greenland or Nicaragua, I just really want to find the most compelling, eye-opening, interesting stories about people and culture.” •

Maggie Ginsberg ’97 is an associate editor of Madison Magazine. The University of Wisconsin Press will publish her novel, Still True, this fall. 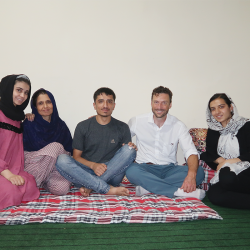