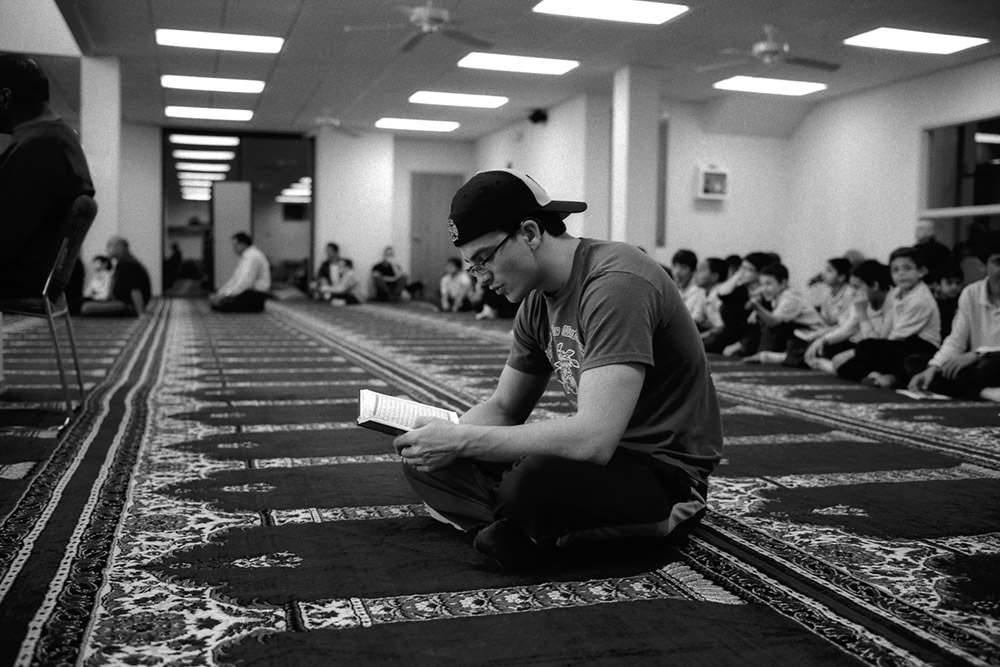 In the face of rising hate and fear, Naheed Qureshi ’94 fights for justice and equality.

“They were talking to me,” says Qureshi, who was not at the November 15 game. The commentary, however, was clearly audible to millions of fans watching the nationally televised broadcast.

“The words were talking to my family and my parents, who spent fifty years of their lives educating generations of nurses who contribute to Wisconsin to this day,” she adds. “It’s really hard to hear those things. Football is something I do to take a break, so it was painful.” “This isn’t a Muslim problem. This is an American problem. This is a question of our values and who we are,” says Naheed Qureshi ’94. “It’s become completely acceptable to say the most vile, bigoted things about Muslims.” Timothy Archibald

The incident was a trenchant reminder of the challenges that Qureshi, the daughter of Pakistani immigrants, faces as deputy director of Oakland, California–based Muslim Advocates. The legal advocacy and educational organization works on the front lines of civil rights to guarantee freedom and justice for Americans of all faiths through high-impact lawsuits, community education, and policy advocacy.

Muslim Advocates focuses on ending racial profiling, strengthening the nation’s network of more than 1,300 Muslim charities — including soup kitchens, homeless shelters, and medical clinics — and countering hate. Notably, the nonprofit filed a lawsuit in 2012 — later joined by the Center for Constitutional Rights — against the City of New York, accusing police of spying on Muslims at home, work, school, and at mosques. The case is pending.

Qureshi helped found Muslim Advocates in 2005, when she was an organizer for the legislative office of the American Civil Liberties Union in Washington, DC. There, she worked on matters related to racial profiling, voting rights, the Patriot Act, and post-9/11 civil rights violations.

Prior to that, Qureshi was recruited — after earning her law degree at Georgetown University — to join the U.S. Department of Justice Civil Rights Division, where she helped shape the Initiative to Combat Post-9/11 Discriminatory Backlash. In that role, she organized community forums around the country, fielded discrimination complaints, and was a liaison to Muslim, Arab, and South Asian American communities.

The challenges haven’t abated, and Muslim Advocates’ stature in the national zeitgeist has become only more pronounced in recent months.

After Paris, and a subsequent attack last December in which an extremist husband-wife tandem killed fourteen public employees in San Bernardino, California, hate crimes against Muslims in the United States more than tripled, according to the Center for the Study of Hate and Extremism in California. There were eighty offenses in the four months following the Paris attacks, ranging from death threats and physical violence, to vandalism and arson attacks on mosques.

Fear has gripped Muslim communities, where parents have complained their children have been called “terrorists” or “Osama bin Laden” by classmates, Qureshi says. The same parents have vocally fretted about their children’s college and job prospects.

“The immediate aftermath of 9/11 is quite different from what we’re dealing with today,” Qureshi says. “There were hate crimes and it was quite challenging, but there were also lots of Americans coming together and supporting each other. There was a feeling that we were all in this together. I don’t think it registered with very many people that there are Muslims here. They didn’t speak about a Muslim problem.”

Fifteen years later, she laments that today’s climate “is beyond the bounds of my imagination.”

But Qureshi is unbowed. Her legal aspirations were shaped by a different time, when television fed the notion that justice always prevails. “I first wanted to be a lawyer because of Perry Mason,” she says with a laugh. “I used to watch repeats with my mom.”

But her commitment to fairness and justice can’t be summed up by a nearly sixty-year-old TV show. It was at UW–Madison where the political science major experienced an intellectual coming of age. Taking a pair of constitutional law classes from noted professor Donald Downs was particularly influential. “He pushed me to think about things from every different angle, even going to places that were uncomfortable,” Qureshi says. “He challenged my views in a way that forced me to question everything I took for granted. He challenged my basic ideas of what’s right and wrong with our system, and what do rights mean versus what does right and wrong mean? That taught me to become a different kind of thinker.”

Just as she is now, Qureshi was very much the political operative during her days at the UW. She organized a coalition of disparate student groups that sponsored educational events on the Bosnian War and genocide that was raging half a world away.

“That experience contributed to my education about justice and informing people about issues,” she says. “It was powerful to see all sorts of unusual partners come together to speak out against a great injustice. When you get together and start working on a common cause, you start to focus on how much more you have in common.”

It’s the same ethos that Qureshi brings to her work today at Muslim Advocates, which involves managing program staff and fostering relationships with other groups fighting to maintain civil rights.

Muslim Advocates also has aligned with the NAACP in pushing support for the End Racial Profiling Act. The proposed legislation, which would affect local law-enforcement agencies, has yet to gain traction in Congress. The organizations did, however, help sway the U.S. Justice Department in 2014 to expand rules preventing FBI agents from considering national origin and religion, among other categories, when deciding whether to open a case.

“Naheed played a major role in helping us frame that,” says Hilary Shelton, director of the NAACP’s Washington, DC, bureau. “She works in a respectful and noncombative way. She’s assertive and thoughtful and very diplomatic in her approach. She’s been a fantastic asset and ally. She has a gift of being able to see, almost immediately, the similarities between the various communities she’s speaking with, and that makes a huge difference.”

Qureshi’s collaborations extend to what, in the wider world, doesn’t always make for easy alliances. She works closely with Bend the Arc, a New York–based Jewish nonprofit that advocates and organizes for a more just and equal society. Arielle Gingold, the group’s associate director, calls Qureshi “one of my closest colleagues and most trusted partners in the work that we do. She teaches me constantly. We have a great dialogue about our different religions, and I learn from her and she learns from me.”

“In the U.S., there is a lot of common ground and a lot of really great and important work being done between the Muslim and Jewish communities, and the Christian community as well,” Gingold says, praising Qureshi for her “contagious passion for the work that she does.”

“We have a strong interfaith partnership advocating for the rights of our communities as a whole, and defending each other’s rights when they are attacked,” she says.

Qureshi derives many of her sensibilities from her parents. “They told my sister and me that we were Muslims, but that we should cherish and value everyone’s background and faith,” she says. Her mother and father met at the University of Idaho, where both were pursuing their doctorates. They went on to teach biology and chemistry in the nursing program at Gateway Technical College in Kenosha, Wisconsin.

Qureshi also draws inspiration from the late anti-apartheid revolutionary Nelson Mandela, and musicians such as Peter Gabriel and U2 frontman Bono, who, after the 2005 bombings of London trains and buses, pointed to a headband emblazoned with the word “Coexist,” and uttered: “Jesus, Jew, Mohammed — it’s true. All sons of Abraham.”

Even Green Bay Packers quarterback Aaron Rodgers draws plaudits from Qureshi. During a postgame news conference on the day of the fan’s intemperate catcall, Rodgers, unbidden by reporter questioning, volunteered that the comment “disappointed” him and “it’s that kind of prejudicial ideology that … puts us in the position we’re in today.”

Qureshi says these are some of the people who give her hope. “It’s not the kind of society they want their children to grow up in. This isn’t a Muslim problem. This is an American problem. This is a question of our values and who we are. We shouldn’t have an environment where it’s okay to talk about Muslims that way.”

She chides a political system in which elected officials and political hopefuls have made anti-Muslim remarks, with no accountability. While Republican presidential candidate Donald Trump has proposed blocking all Muslims from entering the United States, along with shutting down mosques and surveilling Muslims, former candidate Ben Carson asserted the United States should not elect a Muslim president.

“I have moments when I’m very afraid of what’s happening and what I see right in front of me,” Qureshi says. “A lot of people get really discouraged. They’ll say there’s no point to what we’re doing, because this is so overwhelming and we can’t make any progress. It’s become completely acceptable to say the most vile, bigoted things about Muslims.”

But, Qureshi notes optimistically, such behaviors have riled non-Muslims as much as members of her own faith.

“This has crossed the line for a lot of people, and they have made the decision that they can’t stay silent.”

Andrew Faught is a California-based freelance writer. He has written widely on issues and ideas of higher education. 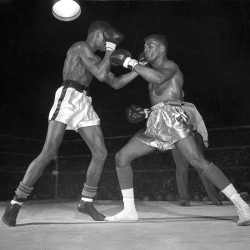