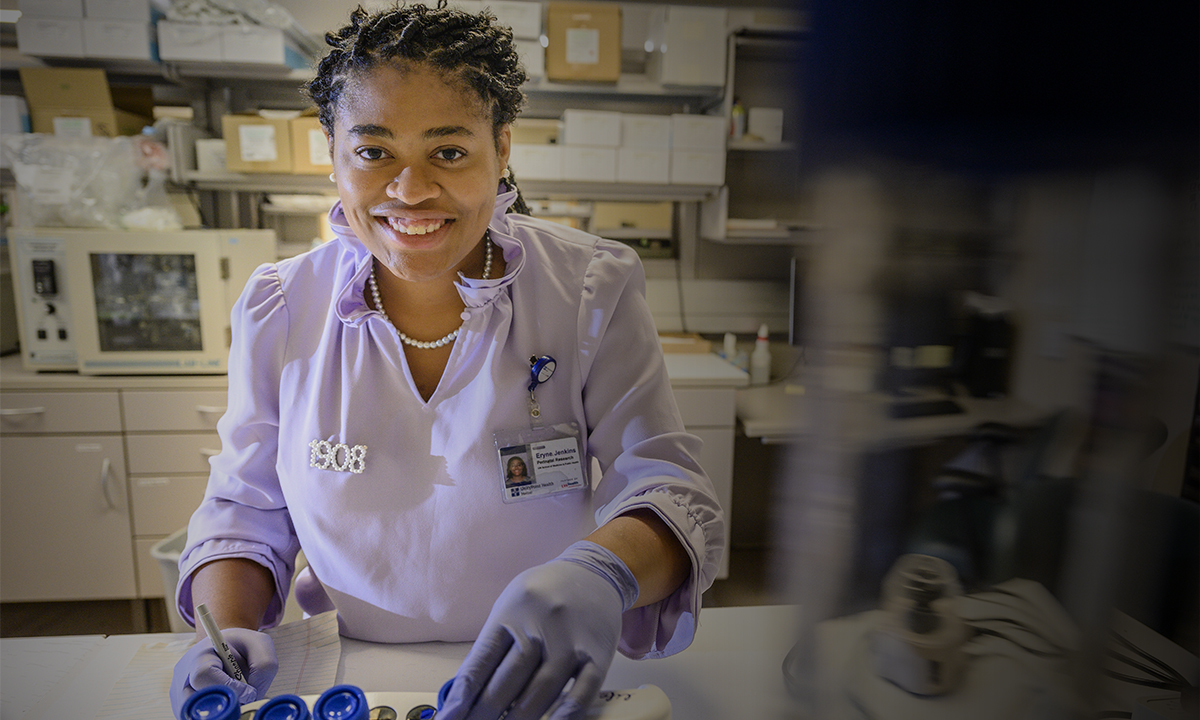 Let Us Count the Ways

The effects of the All Ways Forward comprehensive campaign are everywhere, though many are subtle.

Because of a Chancellor's Scholarship, Eryne Jenkins chose to attend the UW. The All Ways Forward campaign has shaped her UW experience. Here, she works at the Reproductive Endocrinology and Infertility Lab.

Total up the dollars raised, and UW–Madison’s comprehensive campaign — All Ways Forward, which ends in December — is a big deal. When the Wisconsin Foundation and Alumni Association announced the campaign in October 2015, its goal was to bring in $3.2 billion in gifts and pledges. As of October 13, the last time I looked, the total had gone well beyond that, reaching $4,037,855,668.

But of course the $4 billion is not in a single pile, either in coins or bills. Some is in the university’s endowment, where it’s invested to provide support in perpetuity. About a fourth of the sum is promised but not yet delivered — some pledged and some as part of “planned gifts”: included in wills, bequests, or estates. But also, a lot of that money has already been spent: it’s supporting scholarships, research projects, buildings and facilities, and faculty positions right now.

The effects of the All Ways Forward campaign touch nearly every part of university life, and so they’re a little harder to picture than a billion baskets of socks and T-shirts. But follow the career of a current UW student, and you’ll see those effects just about everywhere.

Eryne Jenkins x’22 hails from Magnolia, Delaware, just south of Dover. She wasn’t looking toward Wisconsin as her top choice for college, or even as her second or third choice. Her first choice was Spelman, a historically Black college in Atlanta. “I was so excited to go there because I was looking for that community, that support really,” she says. “And I applied and got into their honors program, but it was going to be full price.”

She then applied and was accepted into Dartmouth, Cornell, and Syracuse, and she found much the same story. It was her father and his love of sports that made Jenkins think of the UW. “My dad was watching Big Ten Network,2 and they had done some commercial on research, and he was like, ‘What about Wisconsin?’ ”

Jenkins applied, though she had never been to the Midwest and wasn’t sure that the UW could offer the sort of community she was looking for. Not only did she get in, however, she was also offered a Chancellor’s Scholarship.3 Her father told her to look on that as a lottery ticket:4 “You just won, and if you don’t take it, then you just threw it in the trash,” he told her. So she enrolled. It wasn’t Spelman. The UW couldn’t offer the same kind of community that a historically Black institution would. But it could offer something different, and the price was hard to pass up.

Interested in eventually attending medical school, Jenkins decided to major in biochemistry5 in the College of Agricultural and Life Sciences (CALS).6 She signed up for CALS’s QuickStart7 summer program for incoming freshmen, to connect with her classmates and get an early jump on courses. Within that program, she met student mentors who helped her get direction for her academic career — not just advice on classes, but also connections with organizations such as AHANA-MAPS, the African, Hispanic, Asian, and Native American8 Minority Association of Pre-Medical Students. QuickStart also gave her tours of campus buildings9 and an introduction to UW traditions, such as Babcock Dairy10 ice cream — she soon discovered her favorite flavor is Badger Blast.

Convinced that QuickStart had given a vital beginning to her UW career, Jenkins volunteered to be a student instructor11 as a sophomore, helping with the Connect to Campus program — guiding freshmen in their transition to university life.

“I remember a student who didn’t understand financial aid,” she says. “We sat down and made an appointment with the financial aid adviser,12 because it’s so important to know what you don’t know. [Because of] QuickStart, I understood that even if you don’t know the answer, someone else might, and they are here to help you.”

Jenkins got involved with the Wisconsin International Scholars Program, and she studied abroad13 in Denmark. She explored her academic options, changing her major from biochemistry to microbiology,14 and eventually switching to biology.15 Just before her senior year, she landed on a double major in biology and environmental studies.16 Her spring semester was interrupted by the arrival of COVID-19, which shut down in-person instruction in March 2020 and would have a major impact on her next semester.

Jenkins’s time working with freshmen in QuickStart inspired her to take on another job that is deeply involved with helping new students: house fellow17 at Sellery Hall.18 “We were friends more than just colleagues,” she says of the house fellows and staff. “That has been a big part of my community.” But the role of house fellow in fall 2020 was far from easy: campus experienced a September surge in COVID-19 cases,19 and Sellery ended up quarantined.

“It was a lot of time spent indoors,” she says.

Still, COVID-19 didn’t entirely define her experience. With encouragement from her former QuickStart adviser, she landed a position in the research lab of obstetrics and gynecology professor Aleksandar Stanic-Kostic, where she studied reproductive immunology:20 “preeclampsia,” she says, “which is hypertension while you are in gestation; preterm birth; and things like that.”

Jenkins also received an On Wisconsin Society scholarship21 from the UW’s Homecoming committee, and she became more deeply involved with a sorority, Alpha Kappa Alpha, one of the Divine Nine22 historically Black Greek-letter organizations. By the end of the year, she’d become the chapter’s president. She joined a religious group, Impact, and took on a summer internship with Madison’s Foundation for Black Women’s Wellness, run by fellow Badger Lisa Peyton-Caire ’96, MS’99. By the end of her junior year, she was deeply involved in Madison life, both on and off campus. 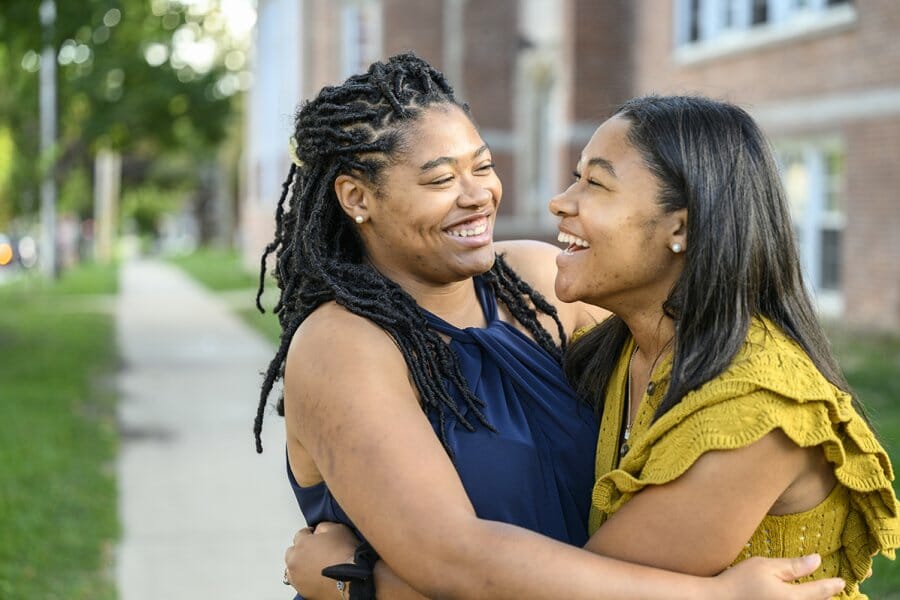 In her final year, Jenkins is trying to take life a little easier. She moved into an apartment off campus, and she has a lighter course load. Sort of.

In her first three years, she says, she would pack her schedule with classes, aiming to get as much done as she could. But this year, she wants a little bit of time to smell the roses, or perhaps the begonias in front of Humanities.23

“I’m just trying not to be as stressed,” she says. “If I have a question after class, I want to be able to go ask it. If I want a break from study time, I just want to do that. My schedule now is a lot more spread out so that I can just break up my time a little bit and take a leisurely walk somewhere if I want.”

This doesn’t mean her schedule is easy: it includes Environmental Studies 46024 and Biochemistry 51025 and Zoology 36026 and a senior thesis with Stanic-Kostic, and she’s toying with the idea of ObGyn 710, a graduate-level class, as her ambition now is not just medical school but to get into an MD/PhD program. “I would like to do medical education,”27 she says.

Jenkins is hoping that a more open schedule will give her time to appreciate the community she’s built in Madison over the previous three years: time for sorority meetings, which may take place in Memorial Union’s28 new National Pan-Hellenic Council Room; time to grab a bite at Union South whenever she wants. “I do love Union food,” she says.

And she isn’t entirely giving in to relaxation. “I signed up for a gym membership this past week,” she says. “I don’t know why.”

But there’s one more development for Jenkins in her senior year, and it promises connection with the most important part of her community: with the assistance of a Chancellor’s Scholarship,29 Jenkins’s sister, Sydne x’25, became a Badger and will study engineering.30 And for this new community member, Jenkins is ready to give support as fully — and fiercely — as she received it. 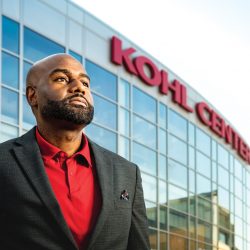