All In on All Ways Forward

With pomp and passion, UW–Madison launches into its fourth comprehensive campaign. 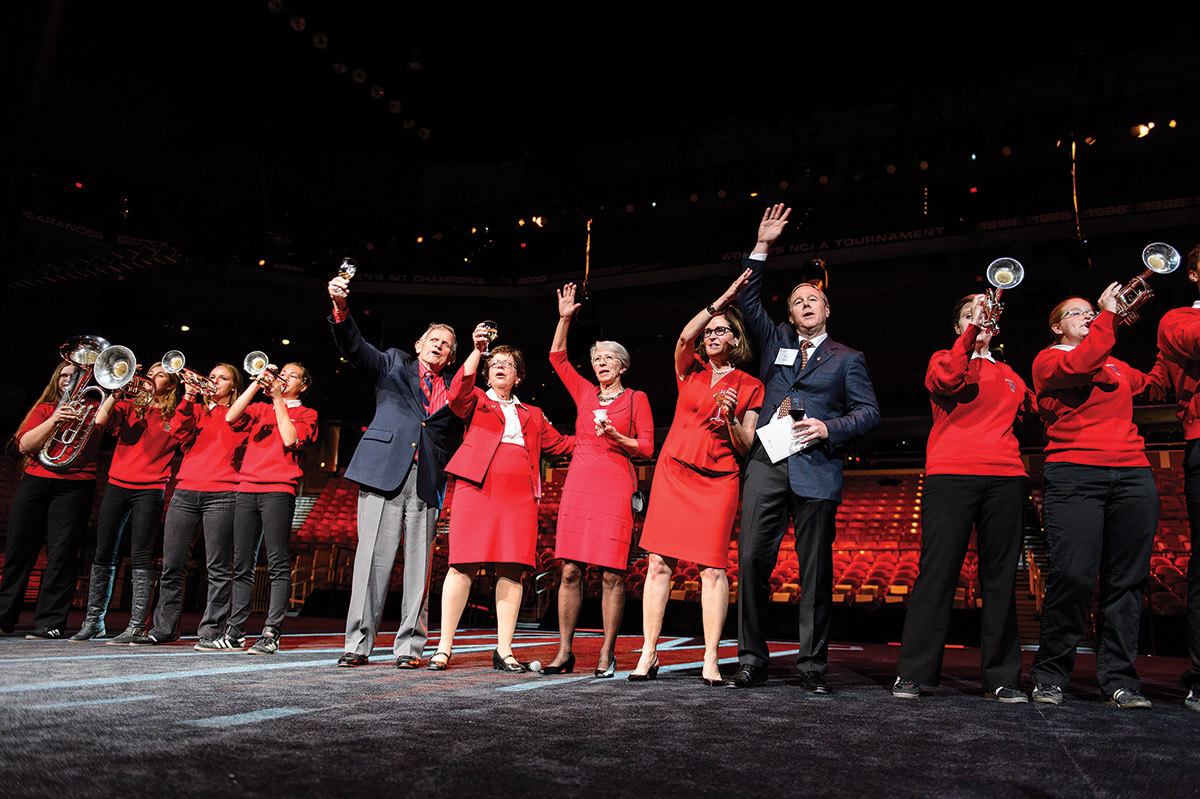 With a chorus of “Varsity,” Chancellor Rebecca Blank sent the new campaign into high gear at a launch party in October. Above (from left, flanked by members of the UW Band) are John Morgridge, Blank, Tashia Morgridge, and Mary Sue '81 and Mike '80 Shannon. 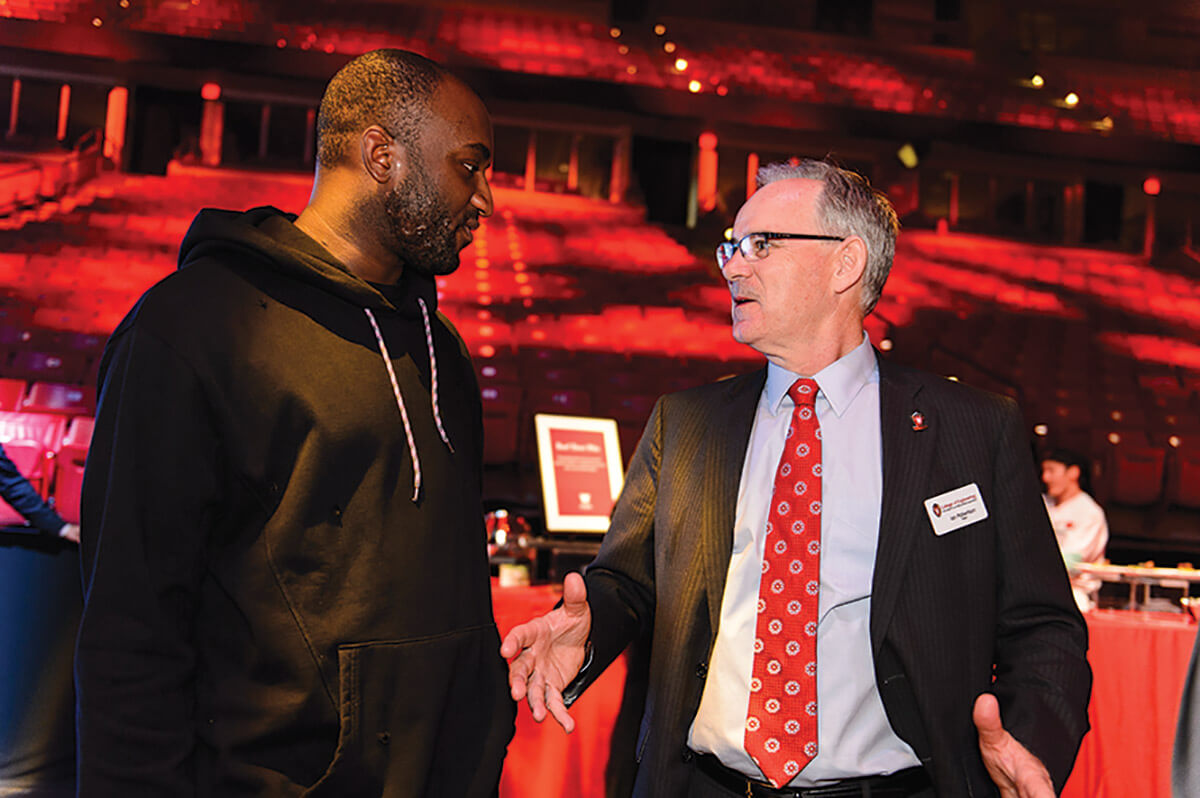 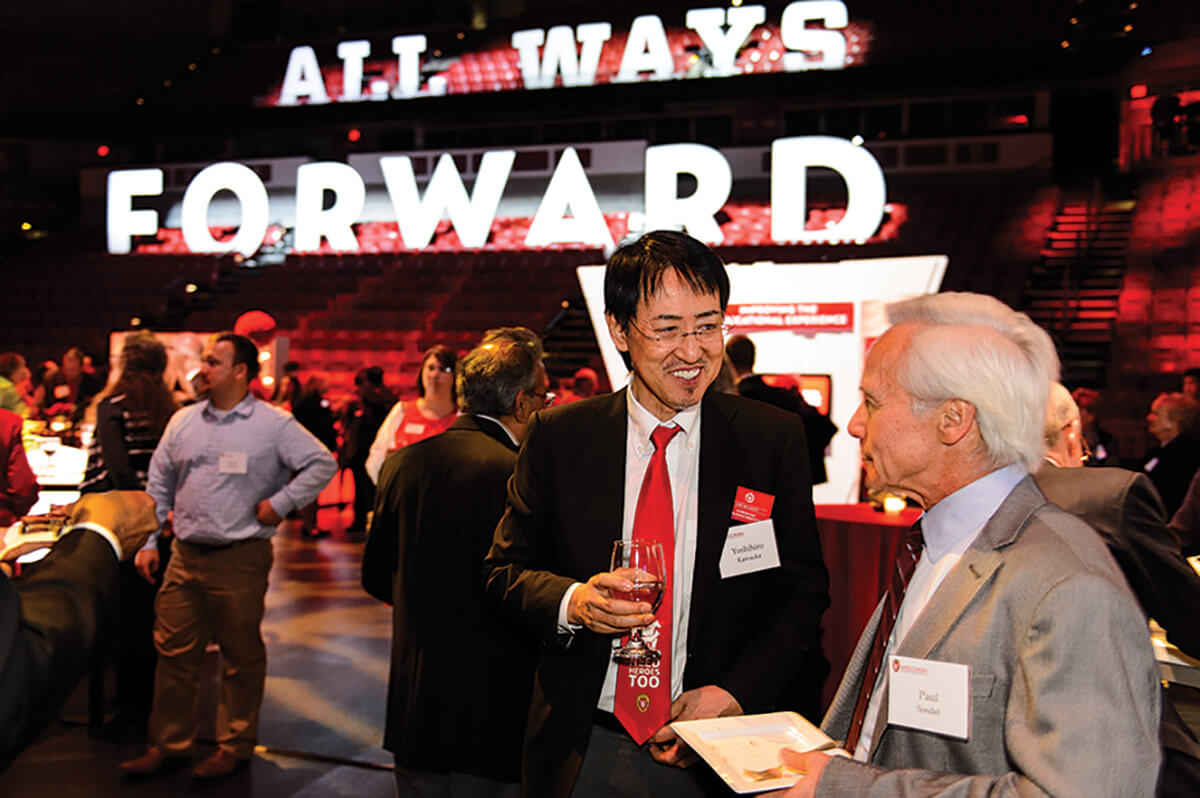 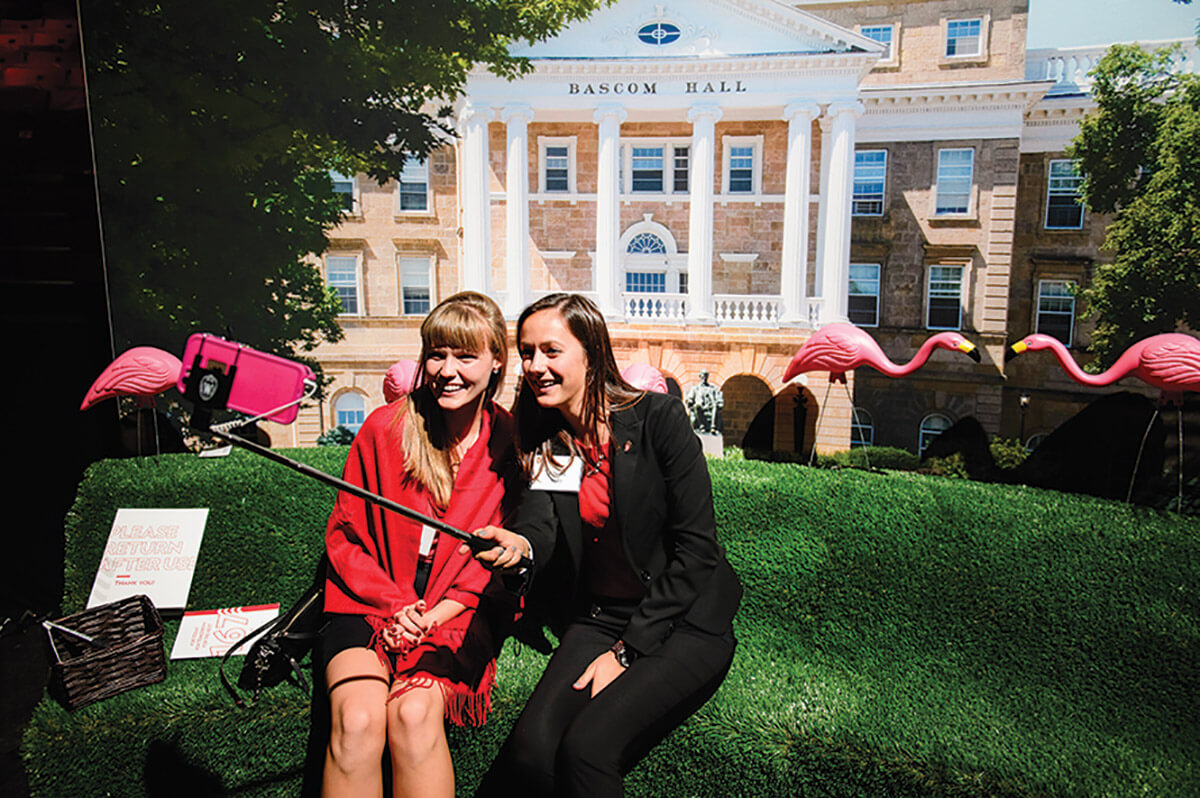 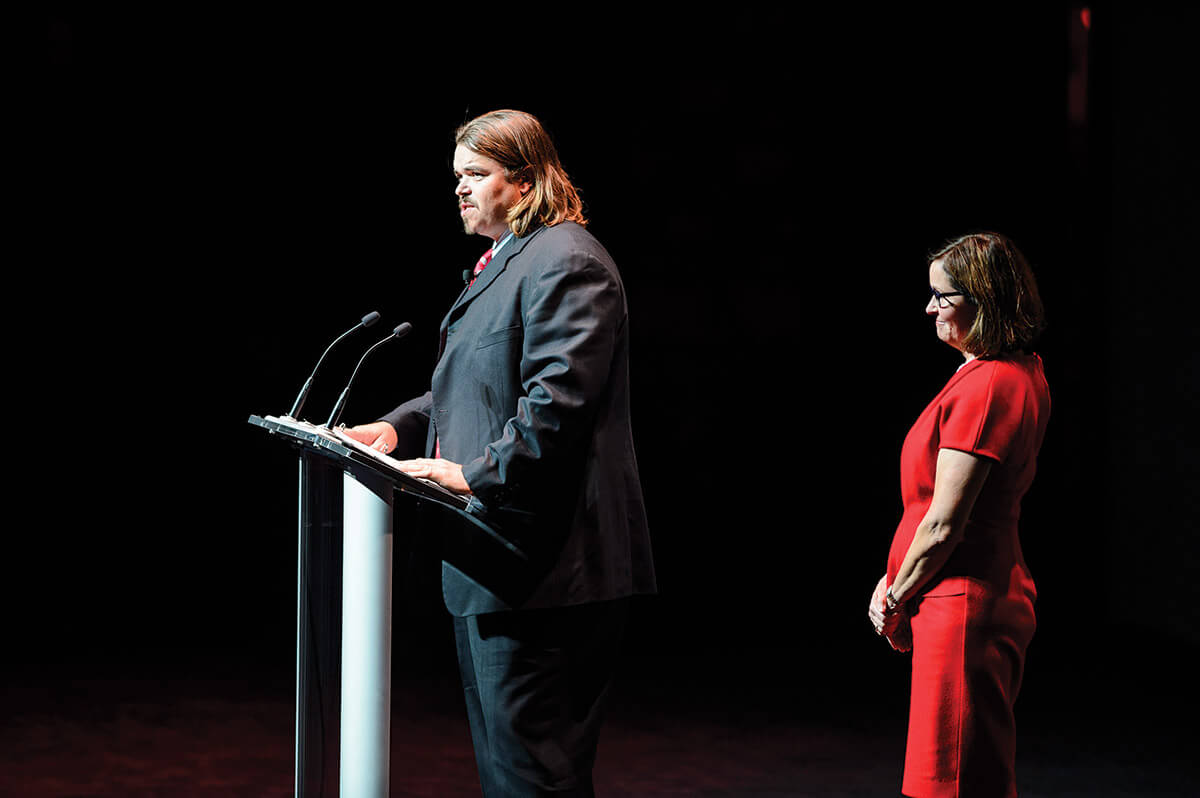 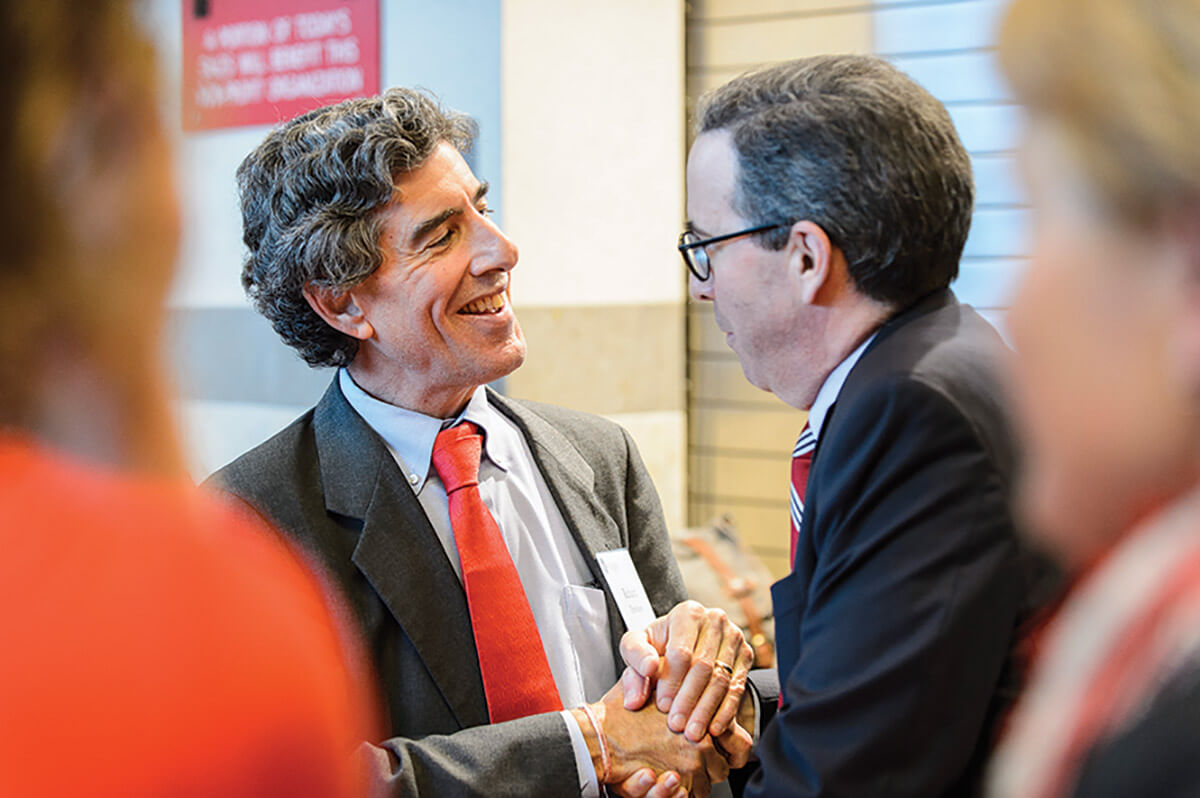 It’s possible you aren’t familiar with All Ways Forward — not yet, anyway. This is the name for the comprehensive campaign for UW-Madison, publicly launched last month at an event in the Kohl Center.

It’s certain that you should, at least in a small way, know who Colonel William F. Vilas 1858, MA1861 was. Most of you have been to Vilas Zoo (named for his son Henry). Many have spent time in Vilas Hall. (If you studied journalism or mass communication, you spent a lot of time there.)

But Vilas was much more than the building and zoo that carry his name. He was a lawyer and a Civil War hero and a lumber baron. He served the UW as a professor and as a regent, and he served the nation as secretary of the interior, as postmaster general, and as a U.S. senator.

Still, that’s not what makes us think he’d support All Ways Forward. The key piece of his legacy is what he did when he died: in 1908, Vilas left his entire estate, $1.8 million, in trust to the UW for the purpose of funding distinguished research professorships.

Vilas was the first alumnus to put serious money behind enhancing UW teaching and research, and his gesture inspired followers (although the trust didn’t begin paying to the UW until after Vilas’s daughter died in 1960, so some of his followers’ gifts actually preceded his). Still, it was a slow-burning trend. Between Vilas’s death and November 2014, the UW built up 142 fully funded, endowed chairs and professorships: an average of 1.3 per year.

That slow burn sparked to high flame last November, when John ’55 and Tashia ’55 Morgridge offered $100 million in matching funds to support faculty chairs and professorships. Over the next seven months, donors responded, and the Morgridges upped their offer to $125 million, so that the university will receive $250 million. That more than doubled the number of fully funded chairs and professorships, so the total tops 300.

Vilas wanted to see the UW become a leading institution in perpetuity, and that’s what the campaign is about: creating large-scale change to ensure the university’s stature.

All Ways Forward, notes UW-Madison Chancellor Rebecca Blank, is “only the fourth comprehensive fundraising campaign in our history — and by far the biggest,” with a goal of bringing in $3.2 billion by the end of the decade.

Though the university has been through a rough year with Wisconsin’s legislature — swallowing a big budget cut and changes to tenure that made faculty more than a little unhappy — Blank insists that the campaign isn’t about patching holes in state support. It’s about building on UW-Madison’s excellence.

“We are, and we intend to remain, a top-ranked, world-class university,” she says. “There’s not a single institution of higher education in the United States that doesn’t increasingly depend upon its friends and alumni. Gift dollars don’t replace other funds, but they help us leverage them.”

The campaign’s public launch during Homecoming week in October was a moment of pomp and fanfare. Blank announced the goal to a crowd of nearly a thousand students, faculty, staff, and members of the Madison community. The event included presentations that highlighted four strategic priorities:

But though the launch was last month, the campaign has actually been underway (in a “quiet phase”) for more than two years. Since July 1, 2013, the UW Foundation (which is UW–Madison’s official fundraising and gift-receiving organization) has received more than $1.2 billion, about 38 percent of the final goal. That includes the Morgridges’ gift, as well as a $50 million matching gift for scholarships from Albert ’52, MBA’55 and Nancy ’55 Nicholas; two gifts from The Grainger Foundation, adding up to $47 million, to support the College of Engineering; and a $28 million gift of art and funds for art education from Jerome ’48 and Simona x’49 Chazen.

“These are the kinds of gifts that transform a campus,” Blank says. “They strengthen our ability to attract top-notch teachers and researchers, who in turn make us more competitive for federal research dollars and help us to attract the best faculty, staff, and students.”

And they’re the kinds of gifts that Colonel William F. Vilas would understand.

John Allen is senior editor of On Wisconsin. For more about the campaign, see allwaysforward.org.