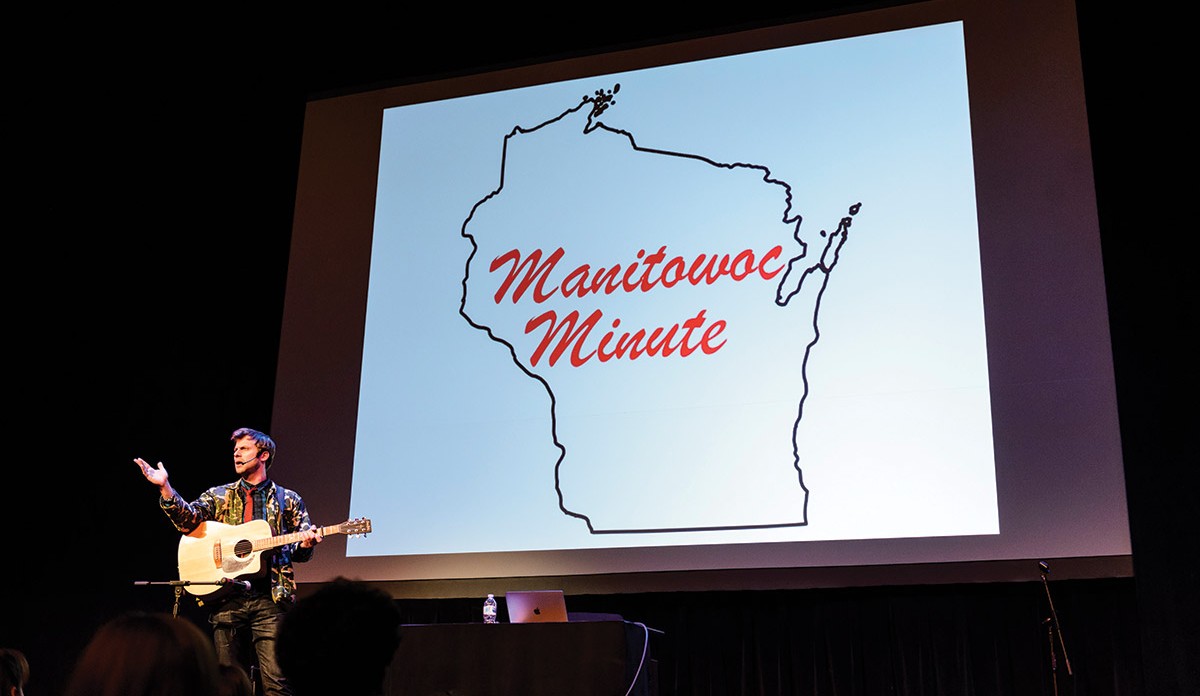 From Wisconsin, With Humor

With the Manitowoc Minute, Charlie Berens lets the world in on the state’s inside jokes.

Berens performed at the Wisconsin Union Theater’s Shannon Hall in January on a tour of sold-out live shows across Wisconsin.

Fresh out of UW–Madison with degrees in journalism and geography, Charlie Berens ’09 was ready to break into broadcasting. But whether he was working in Texas, California, or Washington, DC, he received essentially the same feedback: you talk funny.

He stressed the o in opinion too much. He drew out the a in bag. He used strange words like bubbler when he was thirsty.

What was a Wisconsin guy — let alone one raised in a big family with a passion for fishing and the Green Bay Packers — to do? Ditch the accent to become more marketable?

Let’s just say Berens did the opposite, and the internet is grateful.

In June 2017, Berens posted a short video online that he called the “Manitowoc Minute.” Wearing a camouflage jacket that he stole from his dad and sitting at a bare-bones “news” desk, he gave a shout-out to a bait shop in Plover and poked fun at Stevens Point before getting into the headlines: the misconception held by some Americans that chocolate milk comes from brown cows, Amazon’s purchase of Whole Foods, President Trump’s latest approval rating, and Bill Cosby’s mistrial. Each bit of news served as a setup for a joke, and Berens delivered it all in his thickest Wisconsin accent.

Peppered with comments that would soon become his catchphrases — “Ohmygosh,” “Holy smokes,” and “Keep ’er movin’ ” — he ended with a heartfelt wish — “I hope this was the best minute of your life” — and a none-too-subtle plug for the Packers and a dig at the Chicago Bears.

To date, that first episode has racked up more than a half million views on Facebook, but it almost didn’t happen.

“I was almost hesitant to release it, like, I don’t know that people want to see this,” Berens says. “And then I put it out, and it did well, and then I thought, well, I guess I’m going to do a second episode.”

And he did. And a third and a fourth and another and another each Monday, serving up a mix of headlines from his home state and beyond with a hearty dose of Wisconsin charm. The show, with Berens a constant as the affable host, has garnered fans around the world, inspired a collection of Manitowoc Minute merchandise, and even sparked a tour of sold-out live shows across Wisconsin. 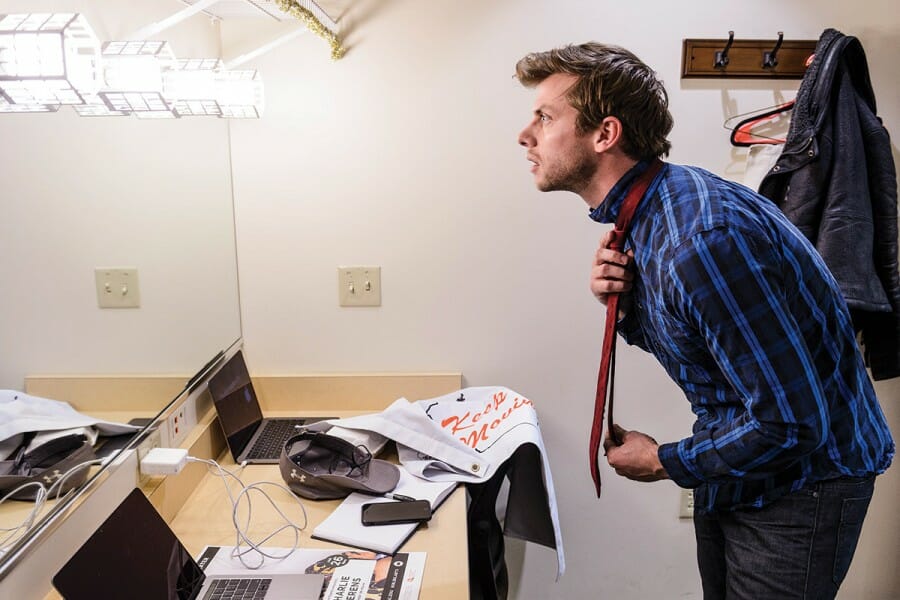 At the start of his broadcast career, Berens (backstage at the Wisconsin Union Theater) found that his accent made him stand out.

Before Wisconsin culture became the bread and butter of his comedy career, Berens lived it as a kid. The second oldest of 12 siblings, he grew up in New Berlin and Elm Grove, with frequent trips up to Fond du Lac to visit his grandparents. He loved the Packers, waterskiing, hunting, and public-access fishing shows.

At the UW he dabbled in music — “guitar, mandolin, kind of folk stuff,” he says — playing covers and original songs at coffee shop open mics and the Memorial Union Terrace.

During the 2008 presidential election, Berens got a gig with MTV’s Choose or Lose campaign, which deployed “citizen journalists” across the country to serve as correspondents. It opened his eyes to less formal, more entertainment-focused modes of reporting.

After graduating, Berens embarked on a career that took him around the country and had him working as a correspondent for a millennial-focused news website; a reporter and host for a Dallas television station, where he won an Emmy; and a host for entertainment and sports outlets in Los Angeles.

All the while, comedy brewed in the background. Berens had been doing stand-up and writing when he posted a video online in 2016 called “If Jack Dawson Really Was from Wisconsin,” dubbing in his own voice for Leonardo DiCaprio’s Titanic character, said to be from Chippewa Falls, to give him a more “accurate” way of speaking. It’s been viewed more than 13 million times.

The success of the video, as well as how audiences responded when he revealed his exaggerated accent in stand-up, reassured him that the world was ready for more Wisconsin.

“When everyone is laughing, we’re all on the same page, even if it’s just for a joke.”

To create each episode of the Manitowoc Minute, Berens culls headlines from politics to sports to pop culture. “And that really actually helps with joke writing,” he says. “The news is basically your setup. Every day you have new setups. So it does help to be a little bit of a sponge for pop culture.”

Occasionally he goes out into the field for a segment. He’s gone fishing with his unamused father, water-skied in the summer, downhill skied in the winter, and taken a yoga class with a bottle of beer perched next to his mat. And while in Madison for a performance at the Wisconsin Union Theater in January, he stopped by the state capitol.

“I went to the capitol expecting to hop on a tour or something,” he says, “and ended up really lobbying to get a bipartisan deal done to just change the Wisconsin flag a little bit.”

His proposal: replace the rope and pickax that the flag’s sailor and miner have been holding since 1848 with bottles of Miller Lite and Spotted Cow, swap out one of the guys for a woman, and change the “Forward” motto to “Keep ’Er Movin’.” The state legislature may not have adopted his changes, but a revised flag is now available for purchase on his website.

In addition to the supper clubs, taverns, and other Wisconsin locales that Berens namechecks in his show, he brings his geography background to bear in his favorite segment: the Craigslist Kicker.

“I feel like you can tell a lot about a place just by looking [at] the classifieds,” he says. “For example, there are so many silos for sale. … Coming from the perspective of a geography alum, what does that say about where we live? It’s almost symbolic of the larger farming community — you’re selling your silo? It’s interesting.”

Ultimately, Berens’s goal with the show is bringing folks together.

“When everyone is laughing, we’re all on the same page, even if it’s just for a joke,” he says, adding that the show has become a platform for his audience to donate to causes like Wounded Warriors, the Boys and Girls Club, and Big Brothers Big Sisters. “Fans always seem to jump at the opportunity to support a variety of causes. It’s a great reminder that there’s a lot of common ground we share.”

These days, Berens and his wife, Alex Wehrley ’09, a communication arts grad and former Miss Wisconsin, split their time between Los Angeles and the Badger State to make the most of this Manitowoc moment.

As he continues to do stand-up, as well as write and produce comedy sketches and pilots, Berens is thinking about what comes next for the web series.

“I think there’s a way to bring the show to outside of Wisconsin, of finding a way to engage and potentially create a network of other people doing similar things around the country,” he says. “So maybe there can be a full-on newsroom. I think it would be fun to have other people who represent where they’re from and do it in the same way the news networks do it.”

What will never change, though, is his love for Wisconsin, and the way he shares it with the world.

“This is who I am,” he says. “I like to laugh at myself, I’m self-deprecating, and I think Wisconsin culturally has that sense of humor. I think people get it. It’s all in good fun.”

Katie Vaughn ’03 is a UW–Madison College of Letters & Science content specialist and a Madison-based writer.