UW–Madison is rightly proud of its faculty. Its professors include some of the world’s brightest minds. UW faculty have brought home an impressive collection of hardware over the years, including seven Nobel Prizes. Most recently, UW scientists contributed to UN’s International Panel on Climate Change, which won the 2007 Nobel Peace Prize. But the UW very nearly hired two others who were destined to win Nobels. Both of them slipped through the university’s fingers in a two-year period. 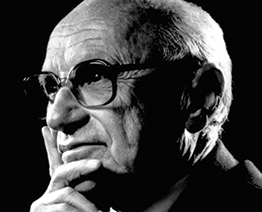 In the first half of the 20th century, the University of Wisconsin had one of the nation’s leading economics departments. Under John Commons, UW economists wrote some of the most influential documents of the Progressive Era. Among other things, Commons’s disciples — including Edwin Witte 1909, PhD1927; Arthur Altmeyer 1914, MA1920, PhD1931; and Wilbur Cohen 1934 — helped to create the Social Security System. The “Wisconsin school” of economic thought helped to guide the New Deal.

In 1940, the UW’s prominence attracted a bright, young academic who was still finishing his doctorate at Columbia. Milton Friedman came west at the invitation of Selig Perlman 1910, PhD1916, one of the country’s leading labor historians.

It soon became apparent that Friedman was a difficult fit with the rest of the faculty. Steeped in statistics, he found Wisconsin’s emphasis on studying institutions and policy to be unsophisticated and unscientific. His UW colleagues, in turn, sneered that he was merely a mathematician.

In 1941, the conflict came to a crisis. Perlman nominated Friedman for an associate professorship. But Friedman had recently put together an informal assessment of the department, and it wasn’t complimentary. George Sellery, dean of the College of Letters & Science and a Wisconsin-school economist, objected to hiring Friedman. He warned Witte, the department chair, that Friedman would “arouse extreme bitterness in the department of agricultural economics and the School of Commerce,” according to a Daily Cardinal story that May.

When Friedman insinuated that the UW’s reluctance to hire him was due to anti-Semitism, the relationship was poisoned. He left Madison to work as a statistician for the War Department through World War II, then joined the faculty of the University of Chicago, helping to establish the Chicago school of economics, which is today one of America’s most influential. In 1976, he received the Nobel Memorial Prize in Economic Sciences for his work on consumption analysis and the history of money. 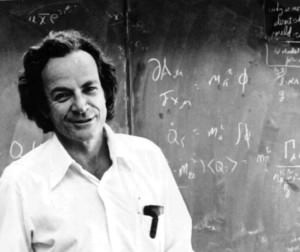 In July 1942, the University of Wisconsin Press Bulletin — essentially a collection of press releases that the UW compiled for state newspapers — included a small blurb: “Two appointments were made to the department of physics,” it read. “Felix Adler and R. P. Feynman, now at Princeton university, will come to Wisconsin in the fall as assistant professors.”

Feynman would never take up the post, and the UW would not be able to send a press release explaining why. The university had granted him leave so that he could work on the greatest national secret of the age: the Manhattan Project.

As an undergrad at MIT, Feynman had made a name for himself as a brilliant nuclear physicist. Even before earning his bachelor’s, he was already developing the theories about the behavior of subatomic particles that would earn him a Nobel Prize in physics in 1965.

That reputation also drew the attention of Robert Oppenheimer, who recruited him to join the effort to build an atomic bomb. Instead of going to Madison, Feynman relocated to Los Alamos, New Mexico, and he spent the rest of the war solving problems in atomic fission.

In June 1945, an impatient Mark Ingraham, dean of the College of Letters & Science, sent Feynman a letter demanding that he return to campus and start teaching classes.

Feynman stayed in Los Alamos and, a month later, watched as the first atom bomb detonated. After the war, he easily found work with Cornell and then Cal Tech.

During the decades after the war, Feynman became a star in the field of QED, or quantum electrodynamics. His work was recognized by the Nobel Prize committee, which granted him a joint prize along with other QED pioneers Julian Schwinger and Sin-Itiro Tomonaga.

Years later, Feynman finally returned to Madison. “It’s great to be back,” he told the crowd, “at the only university that had the good sense to fire me.” 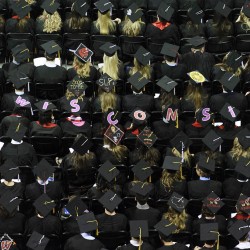