Former Badgers pick up the pace in Portland, Oregon. Badgers in green: Matt Tegenkamp (left) and Chris Solinsky were the top two finishers in the 5,000 meter race at the U.S. outdoor track championships in June. Photo: Photorun

If you’re a fan of track, you may have seen some familiar names at the country’s biggest meets — though those names go with runners in unfamiliar colors. With help from their former UW coach, Nike sponsorship, new training terrain, and each other, a group of former cross-country athletes has traded Badger red for Oregon Track Club green, and are taking big strides in their sport.

“We’re all Badgers, and we talk about it all the time,” says Schumacher, whose cross-country team won the 2005 NCAA title, and finished second five times. “It was a tough decision to leave my home and my dream job,” he says. “The bottom line is we left because of our sport — world-class track and field.”

A three-time All-American at the UW, Schumacher was hired in 1998 at the age of twenty-eight to lead the Badger harriers. Over the next ten years, he worked his way into the record books and the hearts of his runners.

“Jerry and I have a great relationship that started when I was at the UW,” says Tegenkamp, who relocated to Portland to continue training with Schumacher shortly after competing in the 2008 Beijing Olympics. “The relationship between a coach and athlete has to be strong with a lot of trust. There needs to be constant communication, and that takes many years to develop.”

Oregon’s temperate weather offers year-round soft-surface training, which can help prevent the chronic injuries that plague distance runners, shortening their athletic careers. Travel is also less of an issue, as most major U.S. meets are held on the West Coast.

Created by Nike executives in 2001, the Oregon Project has evolved into an elaborate training system, touting the latest research and equipment in sports physiology and psychology and injury rehabilitation. After project director and marathon legend Alberto Salazar experienced serious health problems in 2007, he recruited Schumacher to reduce his coaching load — and to bring in a new group of talent.

The move west is paying off for Tegenkamp. After an eighth-place finish at the 2009 World Championships, he broke the thirteen-minute barrier for 5,000 meters by running 12:58.56 in September 2009, one week after his Nike teammate Dathan Ritzenhein broke the thirteen-year-old American record in the 5,000 meters. “It gave me a lot of motivation,” Tegenkamp says.

He attributes the breakthrough to a new focus on injury prevention and the commitment from Nike. “We are treated just like big-time football or basketball players, and if we need something that will make us better athletically, we get it,” Tegenkamp says. “I am living a dream, getting to travel the world, and getting paid for what I love to do.”

Before the 2009 World Championships, the former Badgers were featured in a series of videos for Runners World magazine. To see them, visit www.runnersworld.com and search “Wisconsin to Worlds.” 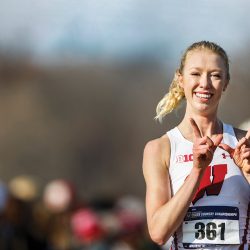