The Badger women’s basketball coach has a game plan for building a contender.

Sitting on a bookshelf inside Bobbie Kelsey’s Kohl Center office are two watches encased in finely polished wood. One is engraved with the words 2008 Final Four; the other says 2009 Final Four. They are mementos from her past and symbols of where she’s looking to take the Badger women’s basketball team in the future.

As the new UW head coach — the sixth overall in the school’s history — Kelsey has work to do before she starts clearing space for another watch. But she’s confident in her ability to build a national contender. “All I know is success,” she said when she was hired.

In her four seasons as an assistant at Stanford, the Cardinal compiled a record of 137 wins and 14 losses (a winning percentage of .907). The team won 69 of 72 Pac-10 conference games and advanced to the NCAA tournament’s Final Four each year. Prior to coaching, Kelsey played at Stanford from 1992 to 1996, and she helped the Cardinal to three Final Four appearances and the 1992 national championship.

As a first-time head coach, Kelsey’s biggest challenge so far has been implementing a completely new style of play for the Badgers. Her predecessor, Lisa Stone, had preached a methodical approach, slowing down the pace of the game and walking the ball up the court.

“We want to play a faster tempo,” Kelsey says.

That may not translate to quick success, however, because even though the current crop of players has embraced the coaching change, they hadn’t previously been conditioned to play such an aggressive style — one in which they’re asked to score and be an offensive threat.

“This is an aggressive person’s game,” Kelsey emphasizes. “If you’re going to make a mistake, do it because you’re being aggressive. I can live with that. When you’re passive and timid, and then you make a mistake, I can’t play you.”

And while defensive-minded teams are in vogue now, Kelsey believes that “scoring’s where it’s at. … You need playmakers and people who can create their own shot and shots for others.”

So, what type of player is Kelsey looking for when her assistants are out on the recruiting trail? “You’ve got to have skill. That’s the X factor. I’d take size second. [Even] if you’re slow … but big and skilled, you’re going to get the job done.”

In her first year, Kelsey’s squad has struggled, with a record of nine wins and twenty losses. But she says that she expects improvement next season, after she’s had a full year to drill into her players what she expects of them.

“We can’t work out with the kids during the summer, but we’ll be able to adjust their workouts beforehand so they’ll be better prepared when they come back in the fall.”

And once everything’s in place, Kelsey hopes to make one more adjustment: to get a larger bookshelf. 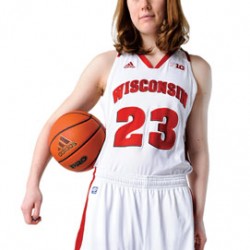 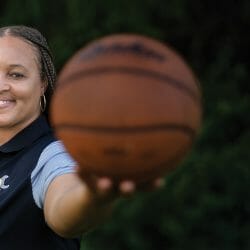 A Woman’s Touch in a Man’s Sport