The Spiker Speaks Out

UW volleyball star Devyn Robinson x’24 grabs the spotlight on and off the court. 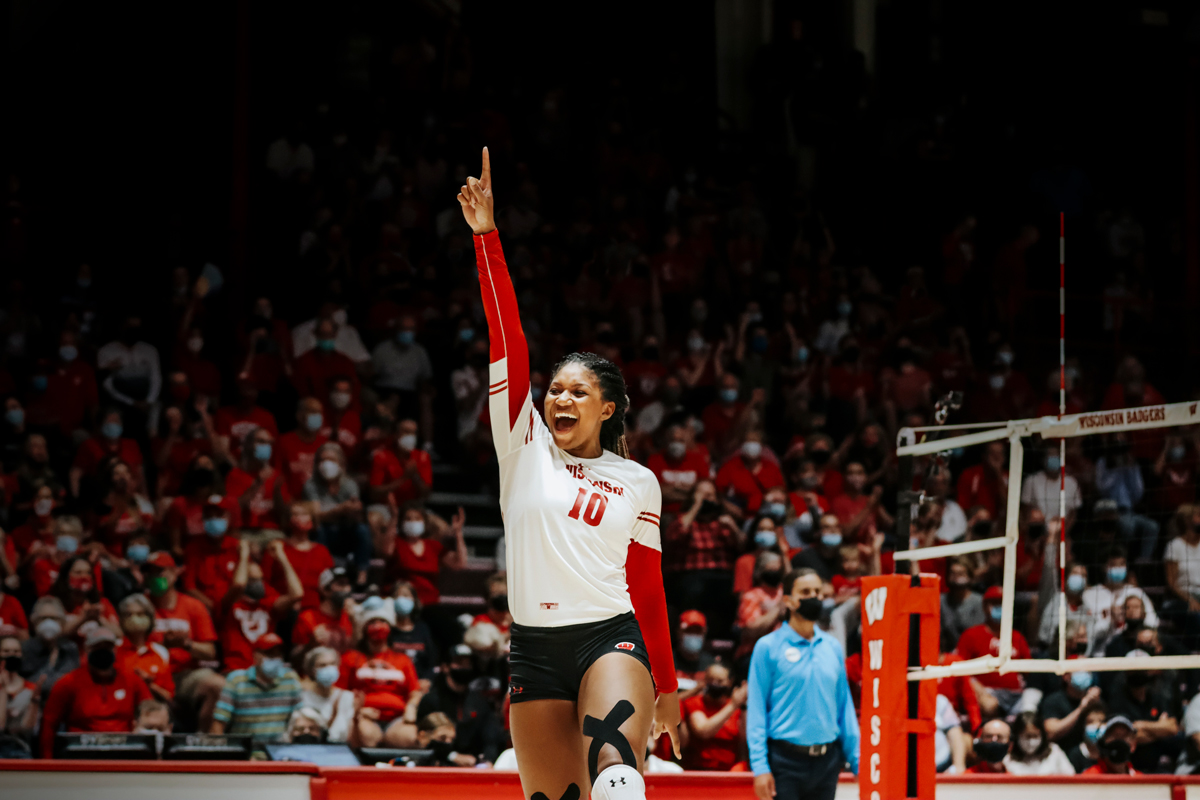 If you ask Devyn Robinson x’24 to describe herself at the outset of her time as a Badger, she uses words like “quiet,” “shy,” and “reserved.” If you know anything about Robinson now, this may be hard to believe.

The right-side hitter and middle blocker made a name for herself on the court, joining Dana Rettke ’21, MA’22 and Anna Smrek x’25 to form the Badgers’ nearly impenetrable block last season, attacking the ball with the ease of swatting away a fly (and with far more finesse).

Off the court, she’s notorious for hamming it up on TikTok, where she shares behind-the-scenes volleyball tidbits and snapshots of life as a student-athlete with more than 11,000 followers. Visibility is important to Robinson, and it’s a spotlight she’s seeking to grow and share, though she picked up hard-learned lessons while getting there.

Robinson graduated early from high school in January 2020 to start training with the Badgers. At 17, she had already won several national and world volleyball championships before arriving at the UW. She was also the team’s youngest player.

“I’d never been in a position where I wasn’t the best in the gym. I automatically had that respect from people [in high school], so I felt like I just always had a voice,” Robinson says. “Then I come here, and everybody’s good. I’m playing with Dana Rettke. I was like, ‘I’m just going to sit back and watch and maybe speak up if I have the chance.’ ”

That chance was cut short by a pandemic that sent all Badgers home. Three months later, the team returned to campus to give training a tentative go. Around the same time, George Floyd was killed in Minneapolis. Age was no longer the most salient part of Robinson’s identity.

“I couldn’t just separate what was going on outside of volleyball from volleyball,” Robinson says. “It gets to the point where it actually affects how I’m feeling and how I’m playing.”

In a meeting convened by head coach Kelly Sheffield, the Badgers discussed the gravity of the news and their respective roles within the growing Black Lives Matter movement. Robinson, Sydney Reed x’24, and Jade Demps x’24 led the conversation, encouraging their teammates to get involved.

“It gave me a voice that I feel like I didn’t have initially,” Robinson says. “It was a chance for me to speak up, and the way [my teammates] responded made me feel like they do care what I have to say. There’s no point in being small when everyone is respecting everybody.”

Instead of kicking up their feet after practices, the Badgers traded their jerseys for poster board and joined the thousands of people marching on Madison’s streets. Afterward, some of the players, including Robinson, painted murals on boarded-up shop windows.

Gone were her days of holding back. When the Badgers got the green light to play their delayed 2020 season during the spring of 2021, Robinson made a strong debut: her performances in her first matches were featured among NCAA Women’s Volleyball’s top plays of the week, and she went on to be named to the all–Big Ten first team. Later that year, their 2021 season culminated in a historic win for Wisconsin volleyball with the program’s first national championship title.

“I was on the sidelines when we won, and I literally couldn’t breathe,” she says. “I don’t think I took a breath until the game was over.”

Robinson’s post-Wisconsin career is never far from her mind. Sure, she’d love to play professionally — maybe in Spain or Brazil — but when her time on the court comes to an end, she’d rather pick up a microphone than a clipboard and a whistle.

“I want to be a sportscaster because I don’t see enough representation of women’s sports on TV, especially volleyball,” Robinson says. “I want to be someone little Black girls can look up to and see that, ‘Oh, if she can do it on TV, then I can do it.’ ”

Fortunately, Robinson is with the Badgers for a few more years. You should catch a game while she’s here. If she’s not on the court, you’ll surely spot her on the sidelines. She’ll be the one dancing like no one’s watching, though all eyes are on her. She didn’t wait this long or work this hard for them to be anywhere else. 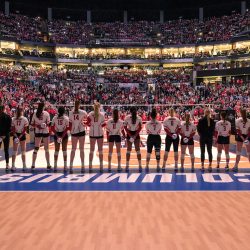 A Tall Wall of Badgers