Before he became a kicker, Rafael Gaglianone dreamed of being a professional soccer player. Jeff Miller

Rafael Gaglianone x’18 hadn’t seen a televised football game, let alone a live one, when he first came to the United States as a 15-year-old soccer player from São Paulo, Brazil.

What the UW’s placekicker knew about American football came from Hollywood movies. He formed his first impression of the country’s most popular sport while attending a game after enrolling at Baylor School in Chattanooga, Tennessee.

“It was kind of tough to watch,” says Gaglianone, who dreamed of playing soccer professionally and preferred its quicker pace. But one of Baylor’s football coaches approached him about kicking for the team. By the time he left high school, he won state kicker of the year honors. His talent was obvious to the Badgers, who recruited him as a scholarship player before he had proven his consistency at the college level.

Gaglianone played center back in soccer, a position that requires a strong leg to clear the ball away from the goalie. But success as a field goal kicker isn’t really about strength. It’s all about technique and fundamentals, he says.

“I’ve been working on that motion my whole life, even though I didn’t know it would apply to football,” he says.

Being a placekicker can be a nerve-racking, and sometimes lonely, experience. A kicker can go from hero to goat as the clock runs out. “You’re the one out there taking that shot, you’re the one putting that weight on your shoulders,” he says.

Gaglianone nailed 86 percent of his field goals during his stellar freshman season, but his accuracy slipped to 67 percent while he struggled with a back injury during his sophomore year. Now he’s focused on bouncing back, having dropped 25 pounds by sticking to a stricter diet. “For these next two years, I’m going to lay it all on the line and be the best I can be,” he says.

An affable character known for dancing on the field after making a field goal, Gaglianone’s biggest challenge has been getting used to Wisconsin’s cold climate. Friends invited him ice fishing last winter, and something got lost in translation when he told his parents back in Brazil, “I think we’re going to hang out on the lake, and poke a hole, and fish and stuff.” Their reply? “No, no, no! You’re going to fall in.” 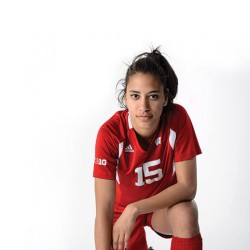