He Came, He Sawed, He Conquered

Cassidy Scheer ’04 shoots to the top of lumberjack sports. 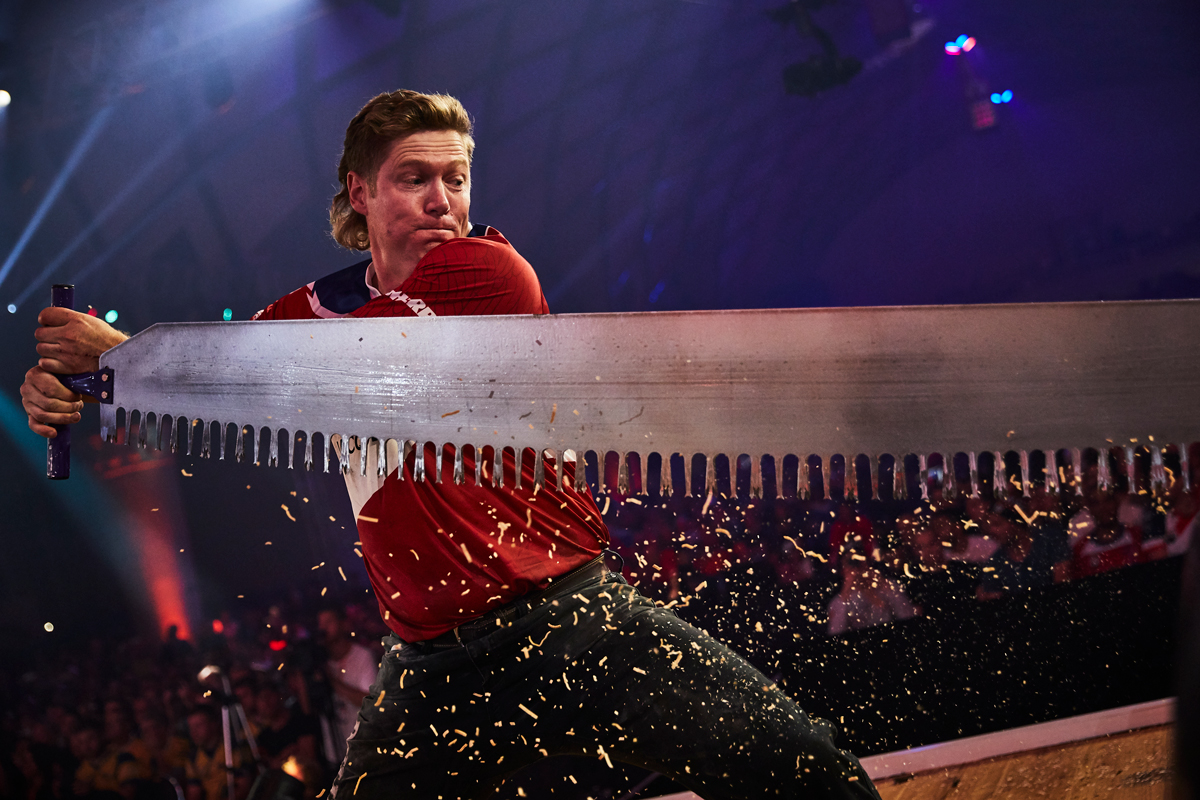 Scheer: “I take pride in being part of the first family of log-rolling and tree-climbing.”

If a tree falls in the woods and no one is around to hear it, it may not make a sound, but for Cassidy Scheer ’04, it makes excellent practice timber.

Scheer is one of the nation’s leading lumberjack athletes, with titles in events from log-rolling and tree-climbing to chopping and sawing. After putting himself through college by managing his family’s lumberjack exhibitions in his hometown of Hayward, Wisconsin, Scheer brings his own skills to the professional stage and continues the family tradition of racking up titles from the Lumberjack World Championship and Stihl Timbersports — the world’s premier competitive lumberjacking organization.

Scheer’s winning record should come as no surprise: he hails from a long line of lumberjacks. Various relatives, including his father, Fred, took log-rolling lessons at the world championship competition site in their youth. Fred went on to win four world championships in log-rolling, which count among the nearly 30 individual titles the Scheers hold in log-rolling and tree-climbing.

“I take pride in being part of the first family of log-rolling and tree-climbing,” says Scheer. “We’re a very competitive family. We’re always trying to one-up each other, but it has a healthy dynamic to it.”

Fred and his siblings also founded the family’s lumberjack exhibition shows. What started in 1979 with some lawn chairs and a $3 admission fee has since grown into a business that draws state and national fans.

Scheer stepped right into the family business. He spent his youth honing his skills and managing lumberjack shows. Despite the UW’s lack of an official timbersports organization, Scheer stayed in practice by log-rolling just off the shores of Lake Mendota.

“I was mostly known as a log-roller and tree-climber throughout my lumberjack sports career,” he says. “I had learned how to chop and saw working in the lumberjack exhibitions but had never really taken those two disciplines very seriously.”

Upon recognizing his knack for recreational chopping and sawing, Scheer committed to a specialized training regimen and began attending competitions in preparation for a shot at the Stihl Timbersports U.S. Championship.

But it wasn’t enough to qualify this Northwoods-bred lumberjack prodigy for Stihl’s competitive stage.

“The first year [2016] that I applied to the Stihl Timbersports series in the U.S., I was actually denied,” Scheer says. Stihl fills 40 spots each year, and Scheer ranked 45th.

But in 2017, he entered the competition ranked 24th and finished eighth overall. In 2018, he rose to a sixth-place finish on his way to a national-champion title in 2019.

“I worked really hard,” he says. “I was always addressing my greatest limiting factor [and working on] all the events that I needed to do better at to actually win that competition.”

After securing his U.S. title, Scheer headed to Prague, Czech Republic, in November 2019 to compete against the champions from Australia, Canada, New Zealand, and Europe in the Stihl Timbersports Lumberjack World Championship, where he placed a close second.

“I’m unique in that I’ve competed at the highest level in all lumberjack sports disciplines. There are only two or three of us who have ever done that,” Scheer says.

His secret to athletic excellence: as with log-rolling and wood-chopping, it comes down to balance.

“It’s finding that ideal combination of athleticism, technique, and mental focus,” he says. “I’m always trying to address my biggest deficiency in those three categories.”

As a decorated veteran of both exhibition and competitive lumberjack stages, Scheer continues to keep audiences entertained through skill and showmanship.

“If somebody watches the 2017 through 2019 Stihl Timbersports U.S. Championships, they’ll see that I’m clearly the person who’s having the most fun out there. I’m the person [interacting the most] with the crowd. And when I have fun and I’m fired up like that, I tend to compete my best.”

Scheer is also helping to train the next generation of lumberjacks, starting with his four-year-old daughter.

“I’m actually planning to get her her first ax pretty soon,” he says. “It’ll be a tiny ax that’s not very sharp, but I’ll set up the chopping apparatuses for her and start teaching her the mechanics of a good swing.”

For Scheer, the allure of timbersports for athletes and audiences alike has always been clear. “Lumberjack sports [are] something that most people can identify with because most people have climbed a tree or split firewood,” he says. “It’s like rodeo in the sense that it’s derived from actual workaday skills.”

Between fitness equipment that mimics chopping work and ax-throwing bars cropping up across the country, Scheer can’t help but chuckle at the bit of lumberjack in all of us.

“There will always be an appeal to playing with sharp objects and doing things that are somewhat dangerous,” he says.