A Quarterback’s State of Mind

Graham Mertz x’23 puts his meditation skills to use on and off the field. 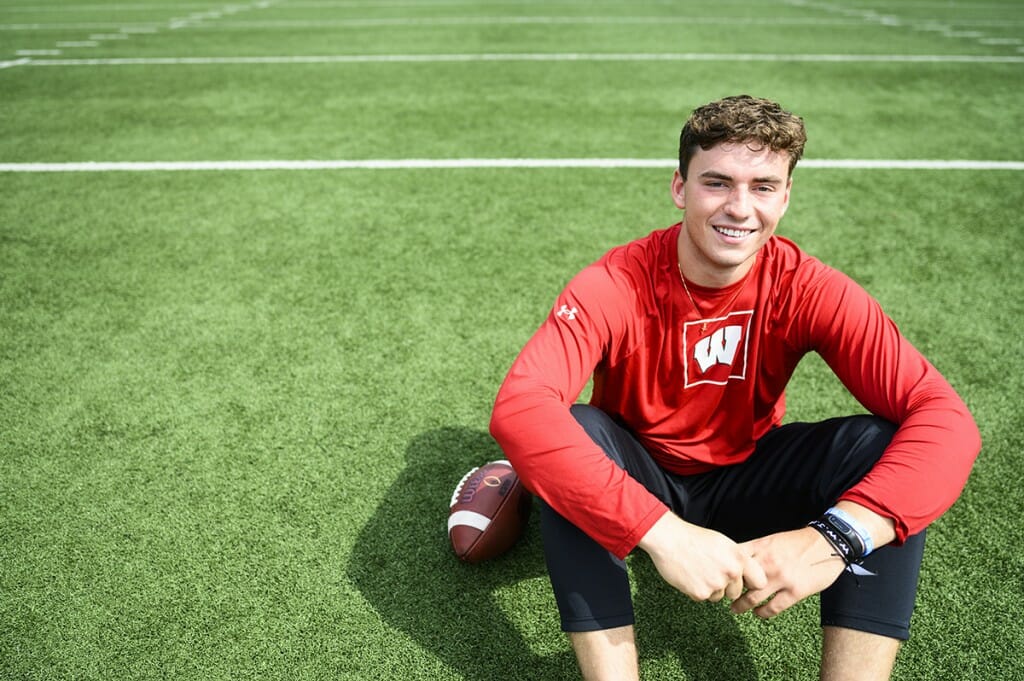 Graham Mertz x’23 is a meditator.

The Badgers’ star quarterback became a true believer as a redshirt freshman, after he threw for five touchdowns and completed 95 percent of his passes in last season’s opener against Illinois. The next morning, he tested positive for COVID-19 — and that’s when he put his meditation skills to use.

“You can’t control everything in life,” he says. “But when you get handed a situation, you can control your response.”

This off-season, Mertz worked closely with Chad McGehee, UW athletics’ director of meditation training, to study mindfulness more deeply. Each morning, he practices a 10-minute “body scan” to check in with himself, clear his mind, and ease into the day. These techniques, he believes, will improve his control of split-second reactions to events that unfold on the football field and in everyday life.

Mertz may not have embraced mindfulness so fully if it weren’t for all the adversity that he’s faced in his young college career.

A four-star prospect, Mertz was the highest-rated quarterback to come to Wisconsin since the start of online rankings in 2000. ESPN scored him the top pocket passer in the nation among the 2019 recruiting class. But the hype went on hold, as Mertz sat behind quarterback Jack Coan ’20 and had to redshirt his first season.

“I had expectations,” Mertz acknowledges, “but I also knew that I wasn’t ready for them. You have to be honest with yourself and know, ‘All right, this is what I want to do, but I also need to do the work to do it.’ ”

Mertz was ready to put in that work the following spring, but the pandemic paused all football activities for months. His second season seemed in peril altogether, with the Big Ten originally postponing fall sports. But the conference reversed its decision, and in the rapid ramp-up to a shortened season, Mertz showed enough progression to earn the starting job.

His record-breaking debut against Illinois captured the football world’s attention. He showed a certain swagger — a near-shocking sight for a Wisconsin quarterback — while tossing one precise dart after another. NFL star Patrick Mahomes wrote on Twitter: “That man @GrahamMertz5 going crazy tonight!”

But by morning, that was old news once Mertz received his COVID-19 diagnosis. Facing rising rates of positive tests on the team, the UW canceled its next two games.

Mertz never recaptured the magic when play resumed. He admits now that he suffered an unreported shoulder injury during the first quarter of his return against Michigan, and it required rehab throughout the season. After routing the Wolverines, the team lost three consecutive games. A win against Minnesota to end the regular season salvaged a bowl-game appearance for the Badgers, leading to a 48–28 victory over Wake Forest. But Mertz largely struggled with consistency, finishing the year with nine touchdowns and five interceptions in seven games.

“Honestly, it wasn’t anything close to where I want to be,” he says.

Wisconsin coaches have faith in Mertz’s ability to improve with more reps — indeed, they believed in the Kansas native before most others. He arrived on Coach Paul Chryst ’88’s radar when he attended a summer camp at the UW as a freshman in high school. But he didn’t start a game until his junior year, when he transferred to Blue Valley North in Overland Park. In his first game, he threw for 256 yards and six touchdowns. After his third game, Wisconsin offered him a scholarship — just the second program to do so. He visited campus and committed a few days later in October 2017.

“The second I walked into Camp Randall, I was just like, ‘All right, this is the whole thing. This is education. This is athletics. This is life after school and after football. This is everything I want,’ ” Mertz says.

But that was only the beginning of his recruiting journey. After Mertz led his team to a state championship and dazzled at summer camps, all of college football’s powerhouses came calling, including Alabama, Clemson, and Ohio State. He received 100 texts per day from recruiters. Some rivals tried to sour him on Wisconsin, weaponizing the program’s run-first philosophy.

“That’s not a valid argument for a quarterback,” Mertz told the Athletic in 2018. “You need to run the ball to be able to throw the ball.”

Eventually overwhelmed by the attention, he shut down his recruitment and honored his original commitment. He credits the Wisconsin coaching staff for establishing trust and staying authentic throughout the process. “They never told me what I wanted to hear,” he says. “They always told me the truth.”

Now entering his third year in Madison, Mertz is focused on the “extreme details.” In addition to his mental training, he spent the off-season working on his pocket footwork and tempo.

Asked about his goals for the upcoming season, he responds: “It’s simple — win every game. I have it on my whiteboard at home. It says win. That’s all I’m looking to do.” 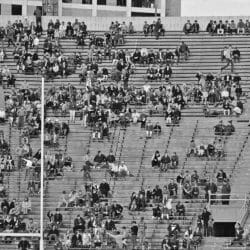