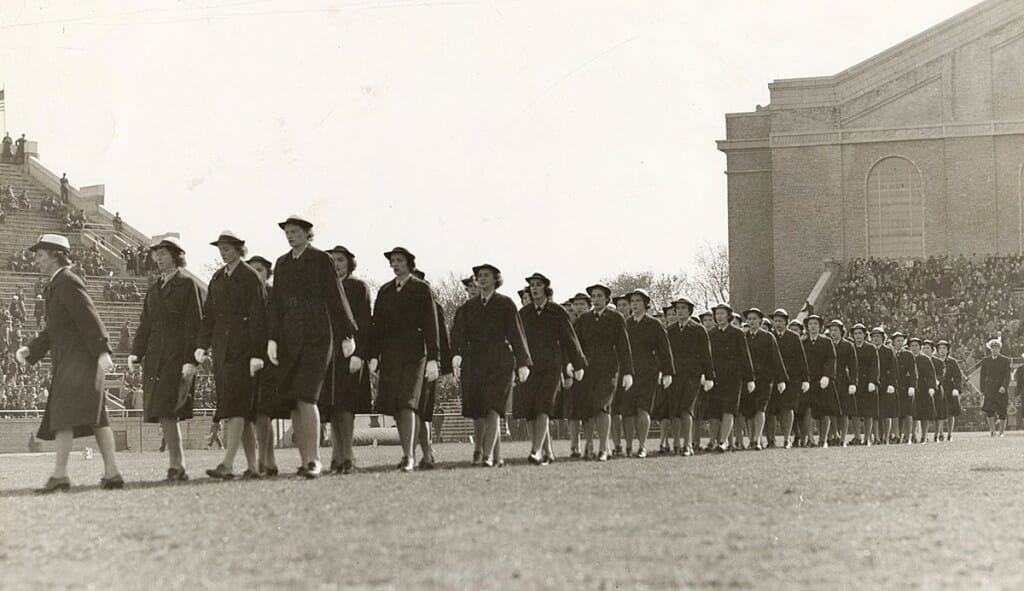 Ranks of WAVES march at Camp Randall Stadium during a football game. At the UW, WAVES trained to earn the rating of “radioman,” for which they matched the skill set if not the gender. UW Archives S05453

When wartime struck the United States, it wasn’t just the men of the military and Rosie the Riveters getting in on the action.

Legislation in the early 20th century prohibited women from serving in the Navy or Naval Reserve. However, in 1941, as the reality of World War II encroached on the United States, a shortage of manpower led the Navy to revisit the employment of women in its ranks.

The creation of Women Accepted for Volunteer Emergency Service (WAVES) mobilized some much-needed (wo)manpower for the naval war effort.

After boot camp on the East Coast, recruits arrived at college campuses across the country for specialized training programs, and WAVES seeking careers as radio operators set their sights on the University of Wisconsin and its Radio School for Enlisted Women.

Civilian students living at Chadbourne and Barnard Halls were moved to private, off-campus housing in order to accommodate the 480 recruits, but they joined them at the following Saturday’s football game, where the WAVES cheered on the likes of Badger football legends Elroy “Crazylegs” Hirsch x’45 and Pat Harder x’44 (who later also left the UW to join the war effort with the U.S. Marines in 1943).

Later that month, Memorial Union’s Great Hall was overrun by Marshall Field’s employees tasked with outfitting the WAVES in the uniforms that earned them the nickname “bluejackets.” (The uniform operation worked so smoothly that it claimed it could outfit 58 WAVES in only an hour and a half.)

The UW has been coeducational since the 1860s, but nevertheless, the WAVES classes were kept separate from those of male sailors, though the curriculum was the same.

The UW’s first class of WAVES recruits graduated on January 27, 1943, in a ceremony that featured more than 100 honor grads. Later that year, female Marines arrived, as did members of the Coast Guard’s SPARS (an acronym taken from the Coast Guard motto in Latin and English: Semper Paratus, Always Ready).

By the war’s end in 1945 — 75 years ago this summer — 100,000 women had served as WAVES. All were discharged in the following months, but the WAVES were not about to recede with the tide of war. With the signing of the 1948 Women’s Armed Services Integration Act, women were permitted to enlist not only in the Naval Reserves, but in the Navy itself.

Wisconsin WAVES, over and out. 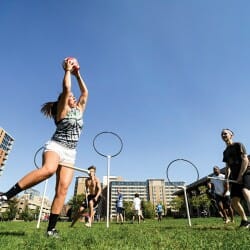