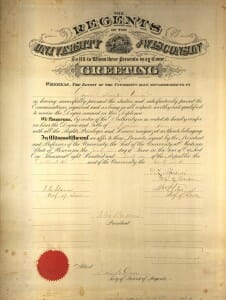 The Law School’s diplomas were much larger in 1876 than they have been in recent years. Compared to his “postcard”-sized diploma, Peter Christianson ’71, JD’77 says, they are “small billboards.” Mary Jo Koranda, Head of Circulation, UW Law Library

For years, the diploma for Clarion Youmans LLB1876, who graduated from the UW Law School just eight years after its founding, has hung discreetly on a wall tucked in the back of the Law Library.

“I hadn’t even realized (the diploma was there),” says Bonnie Shucha JD’14, the associate dean for library and information services and director of the Law Library. “I’ve been here for almost 20 years, and I had no idea. I have passed that diploma every day and … never took a close look at what that thing was.”

Christianson, a proud alumnus who is part of a five-generation Badger family, has collected UW memorabilia — such as Homecoming buttons and family diplomas — for years. Because he receives email alerts about UW–related news, he was notified that Frawley’s diploma would be auctioned off in South Dakota, where Frawley resided after graduating from the university.

From the start, Christianson wanted the Law School to have it back. “I thought it should come home,” he says, adding that if the diploma wasn’t returned now, it likely never would be.

But bringing Frawley’s diploma home proved to be no straight- forward task. Christianson, who signed up to participate in the auction by phone because it didn’t accept online bids, had been told that the diploma was expected to be auctioned off early. Nearly nine hours after it started, he received a call from the auctioneer: the diploma was up next. Until that point, he says, he thought he’d been forgotten.

Christianson placed the winning bid for the diploma, purchasing it for $500, and had it preserved and reframed before presenting it to the Law School at a faculty meeting.

Shucha, who has a background in history, was intrigued by Christianson’s presentation. She started looking into Frawley’s story when she found out that the school had a second diploma from the same year: Youmans’s. While researching the two graduates, she also discovered that they had been leaders in their communities: Youmans worked as a county judge, state senator, and farmer in Wisconsin; and Frawley was a lawyer and rancher in South Dakota.

Now, just in time for the school’s 150-year anniversary, plans are under way to display the two diplomas together.