This kind of intraplate fault generally produces earthquakes much less frequently than those at the boundaries of tectonic plates, such as California’s San Andreas fault, and tends to be less understood by geologists. Some intraplate faults have experienced increased seismicity in recent years, likely due to deep injection wells used for wastewater disposal.

“We can’t predict an exact date for when earthquakes will occur, and it’s unlikely that we ever will,” says Goodwin, a professor in the UW’s geoscience department, “but we want to understand what is driving them so we can better prepare.”

The team showed that an unusual cluster of earthquakes more than 400,000 years ago resulted from an increase in fluid pressure deep beneath the surface. Increases in such pressure can decrease the friction between the two sides of a fault, leading to easier sliding.

Williams, a postdoctoral fellow at the UW, says injected wastewater is likely to increase pressure at a faster rate than most faults have experienced in the geologic past. 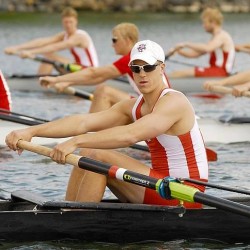